Sammy Hagar’s Full Circle Jam Tour will be in the Twin Cities for a Friday night outdoor show on May 17th at the Mystic Ampitheater at Mystic Lake Casino. This will be a great show as it also includes another rock legend in their special guest, Vince Neil of Motley Crue. Hurry to get your $20 (all in) tickets as part of the National Concert Week promotion which ends May 7th or when the $20 tickets run out. I just purchased mine.  Every ticket sold will also receive one physical CD of Sammy Hagar & the Circle’s forthcoming album, “Space Between”, which is scheduled to be released one week before the concert on May 10th. Select your tickets HERE.

Formed in 2014, the acclaimed supergroup featuring Rock & Roll Hall of Fame inductees Sammy Hagar and bassist Michael Anthony, drummer Jason Bonham and guitarist Vic Johnson, have quickly established themselves as one of the most emphatic and exciting live acts on the road today, seamlessly ripping through career-spanning hits from Montrose, Van Halen, Sammy Hagar and The Waboritas and Led Zeppelin.

With the May 10 release of the debut studio album, Space Between (BMG), the band has produced a collection of original new material which harnesses the depth of their artistic experiences and seminal collaborative sound with Hagar’s prolific writing vein to produce an album that builds and explodes, song after song, around the concepts of money, greed, enlightenment and truth.
Hagar explained about the album, “The 10 songs on the ‘Space Between’ are not just a bunch of new songs grouped together on an album. They were sewn together conceptually for a complete mental, emotional and physical experience (kind of a Three Lock Box). Inspiration is a beautiful thing and making this album is living proof that when the fire of creativity strikes, the songwriting process doesn’t have to be painful or a struggle. Once I had the overall vision, the lyrics and music began to just flow through me and the songs unfolded like chapters in a book.”

On tour, the critically-acclaimed supergroup takes fans on a musical journey through rock history, with a set list spanning four decades of Hagar’s hits from MONTROSE, his solo career, VAN HALEN and beyond — and with Bonham on board, they also tear into a few LED ZEPPELIN classics — thrilling audiences and critics alike with their live concerts. The music draws on the bands’ substantial careers independently and collaboratively; presenting a veteran band still at the peak of their game.

For almost forty years, Sammy Hagar has been one of rock music’s most dynamic and prolific artists. From breaking into the industry with the seminal hard rock band Montrose to his multiplatinum solo career to his ride as the front man of Van Halen, the “Red Rocker” has set the tone for some of the greatest rock anthems ever written with songs like “I Can’t Drive 55,” “Right Now,” and “Why Can’t This Be Love.” He’s earned the highest respect of the music industry with a Grammy Award and induction into the Rock and Roll Hall of Fame alongside Van Halen and is currently on his fourth platinum run with the super group Chickenfoot. Along his journey, Hagar has also become adedicated philanthropist, a New York Times best-selling author and auspicious entrepreneur.

Raised in Fontana, CA, Hagar’s hard scrabble upbringing infused in him an unstoppable work ethic that’s been the driving force behind his rise to the top as a musician and entrepreneur – and continues to fuel his dedication as a philanthropist. “Being a poor kid is a little humiliating and it instilled in me a desire to be somebody,” Hagar remarked. “It’s where all my drive comes from. I was willing to work hard to ensure I was never poor again. And now, it’s like, I still got that feeling but it drives me to wanna give back and to show kids that if you work hard there’s gonna be an open door out.”

Hagar first burst onto the scene in San Francisco as the lead singer of Montrose. Following a string of eight solo albums culminating in several platinum efforts and hundreds of sold out concert appearances across the country, Hagar joined Van Halen in 1985 and took the band to unprecedented heights, including four consecutive No.1 albums before the band broke up in the mid-nineties. He later returned to Van Halen to lead a triumphant 2004 reunion tour.

Aside from making his mark as a hit songwriter and lead vocalist, Hagar has played with a succession of genius guitar players; from Ronnie Montrose and Neal Schon to Eddie Van Halen and Joe Satriani from his current group, Chickenfoot, which also features former Van Halen bassist Michael Anthony and Red Hot Chili Peppers drummer Chad Smith.

Since launching his flagship Cabo Wabo Cantina in Cabo San Lucas, Mexico in 1990, Hagar has turned a lifelong passion for great food, music and spirits into a thriving and iconic lifestyle brand that has grown to encompass an empire of successful restaurants, bars and spirits. His annual Birthday Bash has become one of the year’s mos tlegendary jam-sessions for rockstar to play and the party of the year for Hagar’s fans, the Redheads, each October at the Cabo Wabo Cantina. He’s expanded his Cantina brand to include locations in Las Vegas and Lake Tahoe and has successfully launched five Sammy’s Beach Bar and Grill restaurants, (from which he donates his personal proceeds back to local charities). In 2011, he partnered with noted celebrity chef Tyler Florence to open el Paseo, which was named by the San Francisco Chronicle among their Top 10 New Restaurants of 2011, and in 2012 he bolstered his restaurant businesses once again, opening the first Sammy’s Rockin’ Island Bar & Grill in Roseville, CA.

Sammy’s foray into the world of spirits began as a personal quest to find a tequila worthy of the Cabo Wabo name and in 1996 he began selling his Cantina patrons a house brand of hand-made tequila he’d commissioned from a local multi-generational family of tequila makers in Mexico. 10 years later, he’d built Cabo Wabo Tequila into the second-best selling premium tequila in the United States – and the rest as they say is history. Now, 15 years after conquering the tequila market, Sammy has turned his attention to rum. As a part-time Maui resident, he again followed his “act local” philosophy, partnering with one of the island’s Master Distillers, Mark Nigbur, to cultivate the very best small-batch distilled silver rum on the planet. In its first year on the market, the “Spirit of Aloha” was on Hagar’s side with Sammy’s Beach Bar Rum garnering praise and awards including being named “Best of Show” at the highly competitive 2012 Nightclub and Bar Show in Las Vegas.

2011 saw the release of his highly anticipated autobiography, “Red: My Uncensored Life in Rock,” which reached #1 on the New York Times Best Seller List. He continues to tour the world with his bands Chickenfoot and Sammy and the Wabos, donating back to the local food banks in every tour city they play. His #1 priority; however, is being a great husband to wife Kari and father to his kids.

True Red Rockers need to listen to all of the segments from when Sammy Hagar & the Circle were in studio on the Howard Stern Show on April 9th.  You can enjoy some intimate studio versions of some Van Hagar songs plus hear Sammy answer many of your nagging questions. 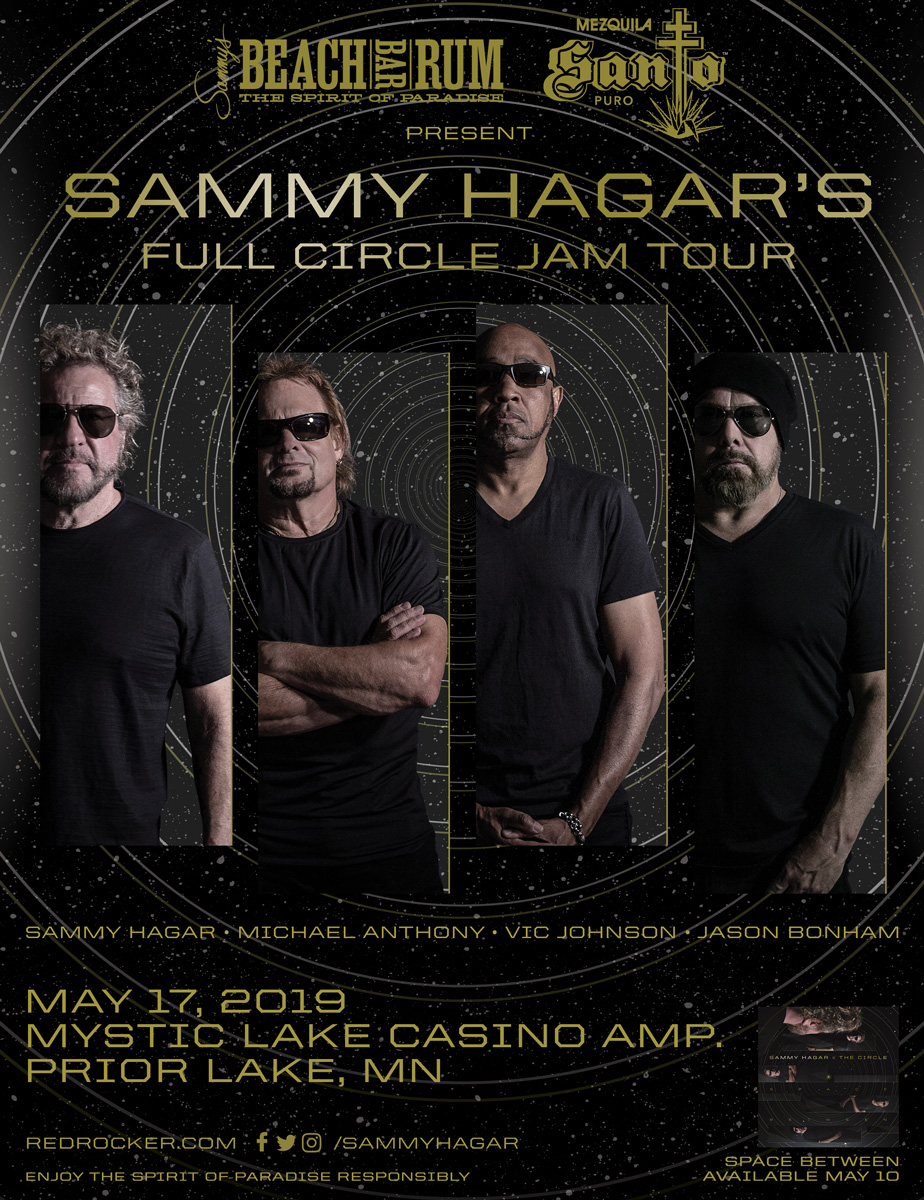 The name of the band is Cowboy Mouth. No other band would do Saturday night, as First Avenue celebrated Mardi Gras. When I pulled up, I saw the purple poster hanging by the door of […]

There was one big question facing the crowd at the packed Icehouse in Minneapolis Friday night: What over the top outfit would Haley Bonar wear? After all this was a CD release AND costume ball. […]

Powerhouses and blues legends, Buddy Guy & Mavis Staples have joined together for their “The Blues is Alive and Well Tour”. They will be performing at the Mystic Lake Showroom Sunday, February 24th at 8 pm. A […]