Nearly five days until hitting the road for their next headlining tour, Hey Rosetta! vocalist and multi-instrumentalist Tim Baker has been holed up in what he calls a “sort of modified garage” in Toronto, working on new music no less, and like many folks this time of year, wrestling with his tax returns.

But with already wrapping up a two month long tour throughout the U.S. and Canada a few weeks before, preparation for the state-wide Communion Residency Tour is slightly nerve-wracking just as much as it is exciting.

“It seems like a really well put-together tour,” said Baker. “What we need really is the people at the show to give us the energy to do our thing the best we can.” 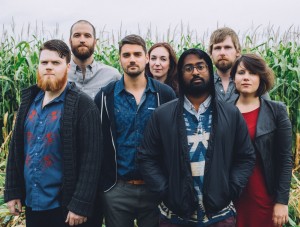 Since their genesis about ten years ago in Northeastern Canada, the group reveals new, fresh layers of experimental sounds and dynamic arrangements on their recently released album, Second Sight.

For what do listening ears and long-time fans owe these new sounds to? While working with recording engineer and producer Marcus Paquin, Baker said the sessions in the studio for the album were more in-depth than ever before.

The beginning of the album’s creation, the most elemental parts of the process, were the same as they have always been. Baker said that process is basically himself, “holed in my house writing songs…you know, the chorus, the lyrics, the melody, the ideas for the songs, and then bringing it to the guys and us banging our heads together to try to make it better…making it more hopefully overwhelming and beautiful, and just arranging it with everyone.”

As for the studio work, the little more than two months spent recording and the larger budget for this latest record allowed the group to take more time to develop songs and make changes to the music, which they have never really had the opportunity to do. 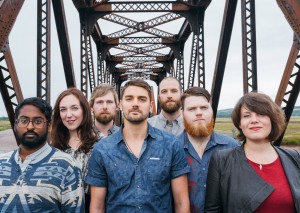 “Usually, the budget allows you to be in the studio, capture the best performances of the things you’ve created and arranged and get out — which is what we’ve always done,” said Baker. “But we could move sort of beyond that.”

Rather than rushing to complete songs as per their past records, the slower, exploratory approach and unique perspectives from Paquin brought a different experience.

Another cause of inspiration for the album struck last May, when the band packed their gear and traveled to the artistic and magical Fogo Island, located off the coast of their native Canadian province, Newfoundland, to record songs and create a short film based around Second Sight.

Now with the Communion tour underway, the complexities of this current album has has every member of the band being more multi-instrumental than before.

“This record, because it was so dedicated to letting certain sounds direct the song, we’ve had to work kind of hard to replicate it and capture those sounds live,” Baker said. “Trying to get the whole palate from the record and to do it live has been kind of tricky.”

From playing to crowds of thousands to performing on smaller stages, Baker said the shows on the Communion tour will “kind of just be the seven of us on stage doing it — getting into the character of the songs.”

Growing up as far-Eastern Canadians, their experience performing across borders, particularly in the Twin Cities, would flatter any Saint Paul-Minneapolis local.

“I personally, and I think everyone in the band, really loves Minneapolis and was really surprised by how awesome Minneapolis is,” said Baker. “You just don’t think about it as what it is, which is this great, big, important, cultural city full of awesome music.”

Floozies Will Funk Up First Avenue on 9/30

The Floozies will bring their fun and funky circus to the First Ave. Main Room on Saturday, September 30th.  Just outside the jazz mecca of Kansas City springs liberal oasis Lawrence, Kansas—separated only by the […]

Ed Sheeran playing here in the Twin Cities isn’t a particularly uncommon occurrence, but that didn’t stop fans of all ages from flooding the XCel Energy Center in St. Paul last night. Sheeran is currently […]