Last night was a show I was looking forward to since ticket became available back in April. I knew it was going to sell out and quickly. With that in mind I bought three tickets for myself and two friends. It had been three weeks since my last show and I about jumped out of my skin when we received approval for the lovely multi-talented singer, songwriter, director, actress and choreographer (and the list goes on) Hayley Kiyoko. This twenty-seven years old had accomplished some much in her young life and has done so with all her heart and passion, which is clearly noticeable on stage.

If any of you have younger children that name might sound familiar. I first came across Hayley when she landed the role of Stella Yamada from Disney channel’s Lemonade Mouth. Let me tell you ladies and gentlemen she is no longer then same girl. Over the last few years Kiyoko has flourished and is undeniably one of the most confident young ladies I have ever seen. The singer knows who she is and where she is going.

Tuesday night’ show at The Varsity Theater was part of her 2018 Expectations Tour which was in support of her debut album Expectations which came out on March 30th of this year. In all honesty, I, like many of her fans anticipated the release of Expectations for months and had it pre-ordered the moment it was available.

For the first leg of the tour Jess Kent was the opener, but as Monday was her last show, I was excited to see who would be joining the lineup. After talking with the dedicated fan at the barrier I was excited to see what Canadian singer-songwriter Allie X had to share. Little to my knowledge I had already heard of Allie X as I have been jamming out to her track “That’s So Us” with no end in sight. Promptly at seven the light dimmed and the keyboard on stage lit but as a blonde woman in a large dressing gown floated on stage. I was immediately intrigued as I could tell she was wearing some form of a mask.

The mysterious woman opened her set with “Bitch”. It was clear that Allie X had some hardcore fans in the audience as they were screaming the lyrics along with her. The singer’s vocal range was quite impressive as she hit many high notes without missing a beat. As she strode across the stage her costume disappeared piece by piece, slowly revealing her true look. Allie X had the crowd eating out of the palm of her hand as she pulled her voluminous blonde wig off.

If you walked into The Varsity without knowing who was performing you would have been easily convinced Allie X was the headline. The singer even commented, “You guys I’m blown away! I feel like I’m the headliner.” With the most sparkly boots I had ever since, Allie X had a connection between her band and the audience, giving off an intimate feeling.

After a quick change and a rise of excitement from the crowd as they chanted “Lesbian Jesus”, a nickname bestowed on Hayley as she often comments, “it’s quite an honor”, the light dimed. Clips from Hayley’s music video appeared on the background of the stage as the band took their places. Coming from Los Angeles, Hayley Kiyoko was erupted like a volcano and for good reason. Her music is an instant earworm, with songs like “Pretty Girl” that will have you singing them in the shower for the next week straight.
Kiyoko’s set was at high volume with no low points even during her more emotional tracks. She had no need to command the crowd as the crowd was already in her grasp, with many holding signs and wearing pride flags with #20GAYTEEN (a Hayley Kiyoko original slogan) printed on them as capes.

The LED screen behind her wear almost as eye catching as popstar herself, displaying a variety of trippy colors flowing around making it look like the stage was alive. Her performance and the visuals worked hand in hand to bring the crowd to their tiptoes for a better view.
With two EPs and an outrageously popular debut album, Hayley Kiyoko would be called an up and coming artist to an average listener. But her true fans know Hayley has been working hard since 2013 to perfect her sound and message. With multiple tours already behind her and strong streaming on both Spotify and YouTube, I won’t be surprised when I see Hayley headlining tours at larger venues next time she rolls around.

With that in mind, if you missed out on seeing Hayley Kiyoko this time around, you can catch her opening for Panic! At The Disco at the Target Center this July. I highly recommend you give her a listen if you haven’t. I promise you won’t be disappointed.

Setlist: Under the Blue, What I Need, Girls Like Girls, He’ll Never Love You, Molecules, Mercy, Ease MY Mind, This Side of Paradise, Palm Dreams, Wanna Be Missed, Pretty Girl, Sleepover, Curious, XX, Feelings, Let It Be, and Gravel to Tempo (encore) 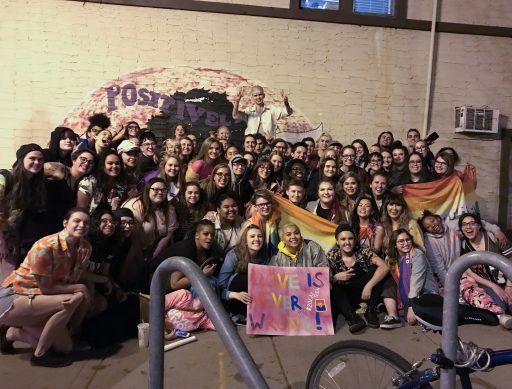 My gateway drug into New Wave was an Austrian band none of our readers will ever have heard about: Chuzpe. Somehow their cover of “Love will tear us apart” made it in the Austrian Charts […]