When last we saw young Halsey she was opening for the Kooks at First Avenue to a few hundred people most of whom knew little of her. 8 months later she is back and playing to a crowd of thousands at the Xcel opening for Imagine Dragons. And she had her fair share of fans in the audience who were ready to see her. 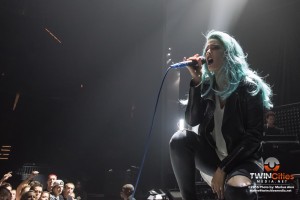 Some technical problems cut her set short but did not impact her intensity. As the told her fans “I am going to do the best I can for you”. Her voice and stage presence were great,  but as a photographer, I would like to sit down with the tech who decided to driwn the woman with the blue hair in solid blue light for most of her first 3 songs.
Her debut album “Badlands” is set to release in August and can be pre-ordered here

Photos by David Rubene I knew that this week was going to be an amazing week of show. It will night after night of some favorite both old and new. I am expecting each show […]

Marty Stuart And His Fabulous Superlatives pack The Fine Line

Five time GRAMMY-winner Marty Stuart And His Fabulous Superlatives have been touring the U.S. in support of “Way Out West“, Marty’s 18th studio album. Mississippi born Marty Stuart was obsessed with learning the guitar and mandolin as […]