Your chance to catch Halestorm is coming up fast.  They will be bringing the “Halloween Scream Tour” to the Mayo Civic Center in Rochester, MN on Tuesday, September 26th. 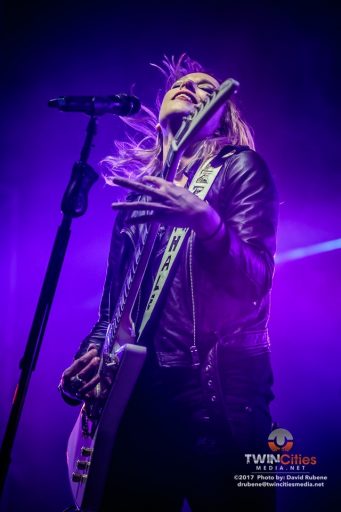 Widely acknowledged as one of modern hard rock’s most explosive live acts, Grammy Award winning band Halestorm recently released their third studio album INTO THE WILD LIFE. Recorded last year in Nashville with GRAMMY-nominated producer Jay Joyce at the helm, “INTO THE WILD LIFE” is highlighted by the historic new single, “Apocalyptic”. The track recently ascended to the top at Active Rock radio outlets nationwide in an astounding 9 weeks – the first time a female-fronted band has scored #1 hits at the format three times as well as the first to have #1 songs from two consecutive albums. Furthermore, “Apocalyptic”has hit #1 at Mainstream Rock radio, marking Halestorm as the fourth-ever-female-led act to top the format more than once.

Joining on this tour stop will be Starset and New Years Day.

Despite the rain, cool weather, Art-a-Whirl and dozen other events happening around the Twin Cities this weekend, Tall Heights and Henry Jamison pulled a crowd to 7th Street Entry on Sunday. Even my favorite bartender […]

So I drove through this (insert expletive HERE) show storm to get to this show…………. That’s how half of our reviews seem to start the past weeks. Like the rest of Minnesota the TCM team […]

Dope, a Nu Metal / Industrial Metal hard-driving band straight out of Illinois, are out on the road on their Revolver Magazine sponsored “Die Mother Fucker Die” Reunion Tour, featuring support from the bands Flaw […]