Go 96.3’s Go Fest ’19 will be an unforgettable night of music at the Cabooze Outdoor Plaza on Friday June 28th. The show is co-headlined by British indie rockers Catfish And The Bottlemen and soulful NY alternative trio X Ambassadors. The evening will also feature performances by buzzing singer-songwriter Allan Rayman, the cool sounds of Wild Belle, plus local music by the winner of Go 96.3’s latest Go Local Battle of the Bands, The Usual Things. Doors open at 5pm for this all-ages event. Both general admission and VIP tickets are still available HERE.

CATFISH AND THE BOTTLEMEN

Defining undimmed ambition as the flag bearers for energetic, arena-filling alternative rock, Catfish and the Bottlemen recently released their third album, The Balance, on April 26th via Capitol Records. Their third album after a wait of almost three years, following 2014’s The Ride and 2016’s The Balcony (selling over one million copies between them), The Balance hits the playlists of a growing, ceaselessly passionate community of young fans worldwide. The album’s first single “Longshot” fanned the flames of expectation from its release and swiftly climbed the charts, recently cracking the Top 5 at Alternative radio. “Longshot” has also amassed over 30 million global streams, as the band approaches 900 million global streams overall.

In the breaks between electrifying outdoor and festival shows in 2018, Van McCann (vocals, guitars), Johnny Bond (guitars), Robert “Bob” Hall (drums), and Benji Blakeway (bass) retreated with Irish producer Jacknife Lee (U2, The Killers) to carefully craft The Balance over a 12-month period. Recorded in seclusion at two locations – Grouse Lodge in Moate, Republic of Ireland, and The Chapel in the countryside of East Lincolnshire – the band lived and breathed the album while residing together in rural isolation. The album was mixed by Craig Silvey (Florence + the Machine, Arcade Fire).

“We loved living in the same place,” says McCann. “We were staying there the whole time, so we were waking up around each other and working until we needed to go to bed. Jacknife was always up. He was the first up and the last awake. It’s good when you’re completely engulfed in recording in a place like that, living together, because every day and all day it was about the songs. We had fun too; they were the funniest album sessions we’ve done.”

The eleven-track album features the new single “Longshot,” which has amassed over 6 million global streams since its January 8 release, as well as the live fan-favorite “Fluctuate.” Fans will be able to hear these new songs live during the band’s current tour. In addition to the album name and familiar one-word song titles, the creative bridge between 2014’s platinum-certified debut, The Balcony and its gold-certified follow up, The Ride, has been reinforced by the band returning to San Francisco-based graphic artist Tim Lahan to provide cover artwork for a third time.

Practically of no fixed abode, Catfish and the Bottlemen have toured constantly since their formation, now over a decade ago. The past eighteen months have seen the band claim their place as a bona fide arena band at home, adding a sold-out UK arena tour in February 2019 to an impressive list of already conquered stages. Significantly, it also invited more quality time with global fans on tours to South America, Australia, Japan, and the United States, culminating in an electrifying main-stage performance at Lollapalooza in 2018. “Longshot” hints that the band’s rapid ascent to “big hall” players has crossed over to influence their time in the studio. 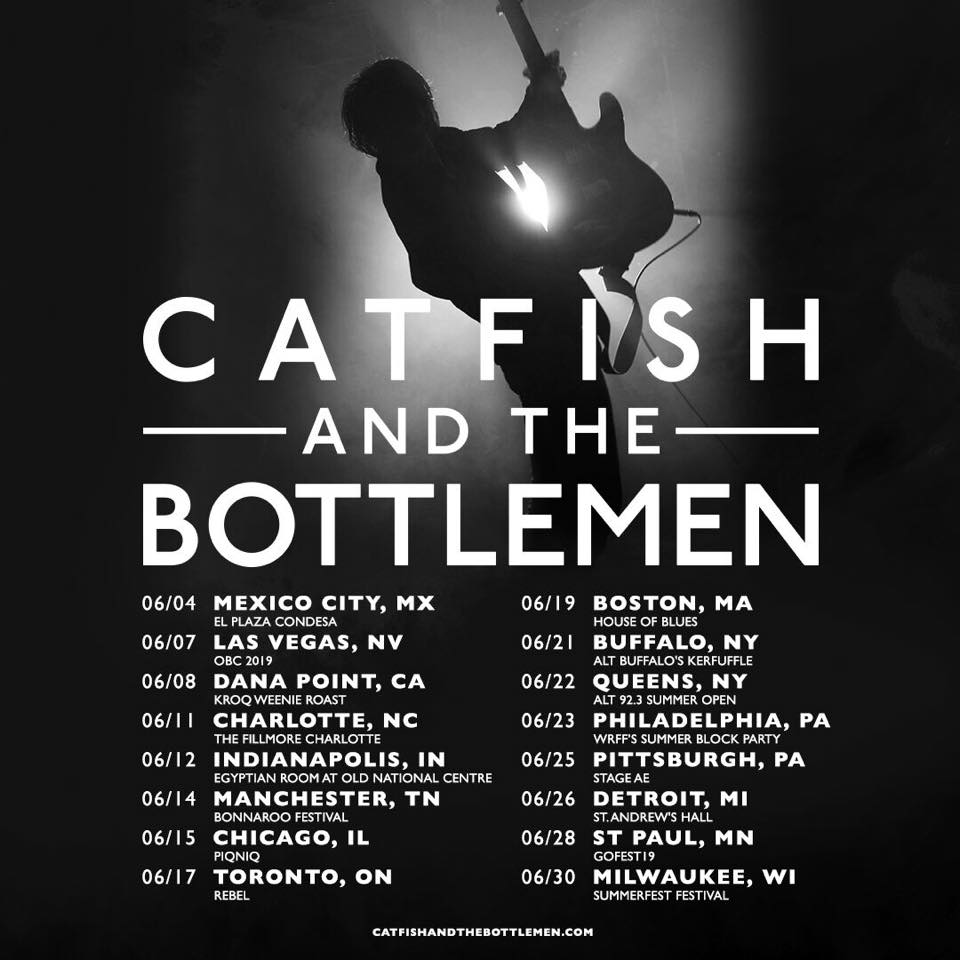 In the past few months X Ambassadors have not only been putting the finishing touches on ORION, working closely with producer Ricky Reed, but have branched out and written and produced for others. The band co-wrote and produced three songs on Lizzo’s new album including the title track “Cuz I Love You” and lead singer/songwriter Sam Harris has written and produced eight songs for the recently released For The Throne- Music Inspired By The HBO Series Game Of Thrones soundtrack.

X Ambassadors’ debut platinum selling album VHS saw the band transition from Ithaca alt-rockers and Brooklyn indie scene outsiders, to Billboard stalwarts. The album was an intimate insight into Sam Harris and his brother Casey Harris’ youth studded with audio snippets from home movies, and early recording sessions and sound checks. With it, came the genre-defining hits “Unsteady” and “Renegades,” a three-year global touring odyssey and a string of high-profile festival performances. Harris’ songwriting became increasingly personal resulting in the shattering, shimmering 2018 singles “JOYFUL” and “Don’t Stay” followed by a North American headline tour. Always looking to give back to the community that raised them X Ambassadors returned to Ithaca for the second annual Cayuga Sound Festival this past September creating and curating two days of musical performances and raising money for local charities.

In 2019 X Ambassadors released “BOOM,” a quick-fire anthem for emphatic recovery and personal revolutions. The artwork for “BOOM” is written in Braille and designed in a yellow-on-black colorway. For Casey Harris, the band’s keyboardist and Sam Harris’ brother, who was born blind, it is the first physical manifestation of his work that he has been able to experience visually. He has just 10% of his vision.

Below is a list of album release shows for X Ambassadors:

Allan Rayman is a singer/songwriter. He is a young man. He has released four projects – Hotel Allan, Roadhouse 01, Courtney, and most recently Harry Hard-On which have given him somewhat of a cult following. The young man has played sold-out headline tours in the United States and Canada and has made a name for himself at major festivals including Bonnaroo, Lollapalooza, Ohana, Austin City Limits and Osheaga. Allan will play more festivals one day. Allan has seen success internationally with several European tours under his belt. Allan recently completed headlining European and North American tours.

Rayman’s critically acclaimed album Harry Hard-On was released late last year via Polydor UK/ Republic Records/KIDindaKorner/Universal Music Canada. “Rose,” the album’s debut single found a home on alterative radio both in Canada and the U.S where it quickly climbed the charts. Along with success on the airwaves, Harry Hard-On has been met with critical praise from the press with Time Magazine heralding the track “Crush”, writing, “Rayman’s voice contains multitudes: a rough ache, a smooth hum, a rock star’s confidence.”

Since the release of their critically acclaimed debut album, Isles, the band has not stopped. They have toured the world, playing Coachella, Lollapalooza, Corona Capital, and Austin City Limits. They have appeared on the Tonight Show with Jimmy Fallon and Conan. They’ve had their music in dozens of television shows and films, and Natalie recently sang the opening theme for the HBO show “The Deuce” with Elvis Costello.

Everybody One of a Kind is the bold new record from Wild Belle. It’s a freaked-out sonic collage of all the things that brought us into their universe: The breezy reggae feelings on Isles, the darker edges of Dreamland, and a vibrant new energy that marries past and future. The album bends genres and busts stylistic boundaries. Dub Reggae, Soul, R&B and Pop are all fair game, as the band lovingly explores this fertile ground. The message that runs through the songs is clear: we’re all “freaks,” we all need love, and we’ve got work to do. As Natalie boldly proclaims in the rallying cry of “We Are The Future,” “This is a revolution.”

An early meeting during the making of the album with producer Max Martin brought some things into focus for the band. He felt that there we three elements that made something a Wild Belle song: Natalie’s voice, Elliot’s baritone saxophone, and a reggae rooted rhythm. He asked them to make a number of songs with only these core elements. With this in mind, the band set out to make the most focused and stripped-down record they’ve produced to date. Natalie’s vocals sit front and center in the eclectic world of Elliot’s production.

The impact of their new sound is immediate. Album opener “Rocksteady” hits hard. A pulsing Buchla synthesizer, Natalie’s lilting vocal melody and Elliot’s baritone saxophone ripping through the wall of rhythms. “Mockingbird” is an up-tempo reggae stomper that moves bodies and feet (check their ecstatic backyard dance party meets old school cop chase video-filmed in the backyard of legendary painter and friend Mark Grotjahn.) The song, produced by John Hill started by mining his South American jungle field recordings for bird and animal sounds. Check it out below. 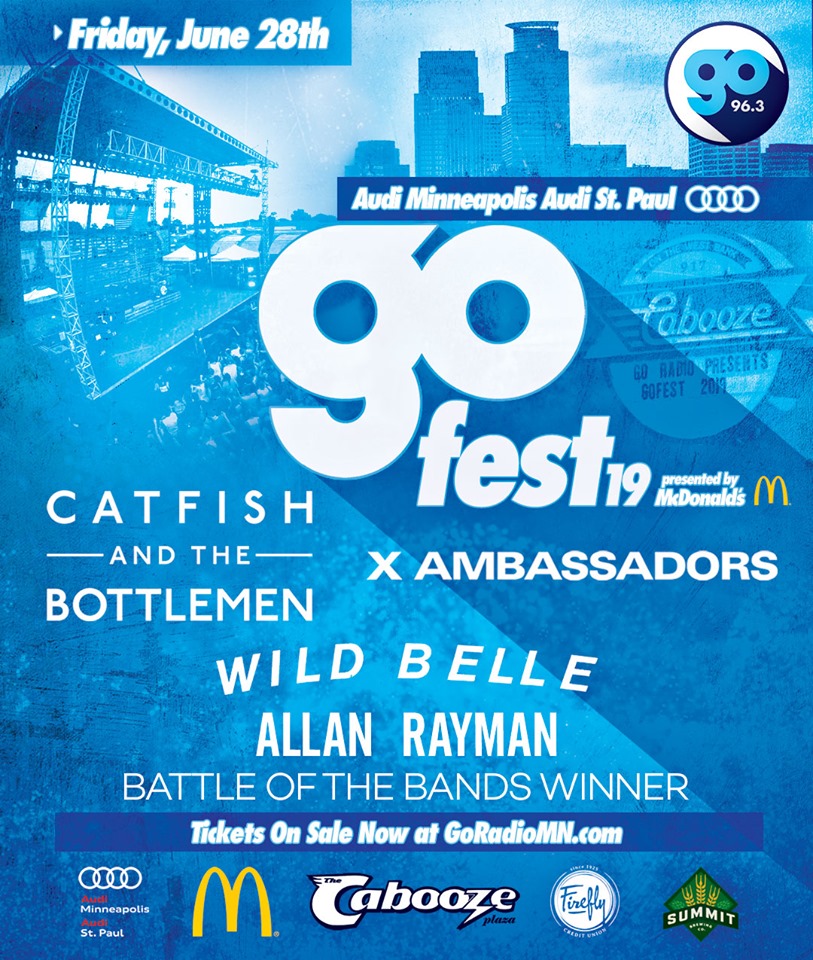 Get ready for the ULTIMATE DANCE PARTY! The Varsity Theater is throwing a Winter Beach Bash featuring PopRocks on Friday, January 11 and they want YOU to party with them! Pop ROCKS is not just […]

Summer is the season of music festivals around the Twin Cities.  There are big ones and there are small DIY type deals.  Obviously, when attending one of the big ones, you have a chance to […]

Some nights are exactly what you expect and others are the opposite. I was expecting to roll up to a completely sold-out, packed Triple Rock on Saturday for Nightly and Urban Cone, but rather I […]