Being a sucker for Irish Punk I had been looking forward to yesterday’s Flogging Molly show since it had been announced. Add Frank Turner and Chuck Ragan to the mix and it was going to be an interesting evening. Little did I know, how interesting…………
On my way to the show, a semi mistook my car for a Pokémon and crunched its rear. So instead of Chuck Ragan, I got to fill out paperwork. Then right as Frank Turner’s set ended dark clouds and the first lightning bolts filled the sky followed by a tropical downpour that forced Flogging Molly’s set to be cancelled. They did play indoors to a smaller crowd much later, but by that time I was at home drying off my cameras and then myself (One has to have priorities). 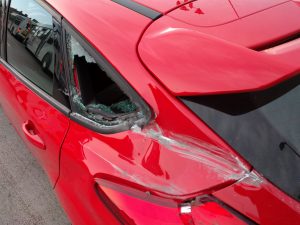 That left Frank Turner to fill my Rock’n Roll needs for the evening, and I am happy to report, he did his job, and then some. For me Frank is one of those musicians whose songs I like, but who just blow me away with their live show. Starting their set with the theme song to Jurassic Park as walk on music Frank and The Sleeping Souls kicked off a high energy set with “I still believe” that included a harmonica duo guest appearance. Turner is a bundle of energy on stage and it is infectious. Mid set featured an acoustic version of “Glorious You” before he took it into overdrive for the last few songs. He had the crowd sing along and commented on their first effort: “That was a solid 6 out of 10, maybe you’re ok with that, you can look your kids in the eye tomorrow morning and say: 6 out of 10 was good enough for me”
Closing with “Four Simple Words” Frank Turner went off stage and into the crowd of fans, he actually had to convince a security guard that he really wanted to go there. Overall, he lived up to everything I heard about his live shows. For the record: This was Frank Turners 1,946th show – I guess practice does make perfect. 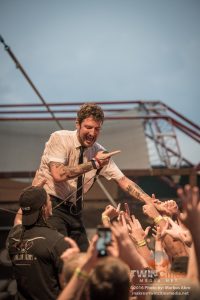 Too bad about Flogging Molly, but that’s the risk one takes with outdoor shows. Here’s hoping that they will be back soon.

“An evening with They might be Giants” is more accurately described as “An all-niter with TMBG”. The band did not play one but two generous sets and 2 encores. Not that anyone in the audience […]

Dope, a Nu Metal / Industrial Metal hard-driving band straight out of Illinois, are out on the road on their Revolver Magazine sponsored “Die Mother Fucker Die” Reunion Tour, featuring support from the bands Flaw […]