If only Prince Harry would have been in town last night, we could have enjoyed a perfect trifacta of English redheads. Alas we had to make do with Ed Sheeran at US Bank Stadium and Florence & the Machine at the Target Center. I for one was headed for the latter with my daughter in tow. 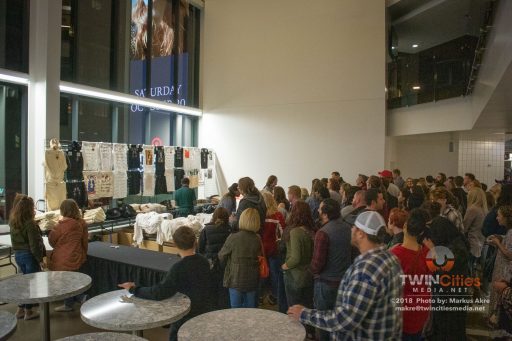 The evening started with a set by Seattle’s Perfume Genius – or as his passport says, Mike Hadreas. The intro to “Otherside” his first song was a slavic women’s choir piece that got  everyone’s attention quickly. Not that Perfume Genius needed much help with that. His engaging set was well received by the audience. I have seen opening acts that rattle around on an empty stage seeming a bit lost. Here the lighting tech actually used the shrouded equipment of the headliner to play with light patterns, creating some cool effects. We enjoyed his set and will be keeping an eye out for him when he comes to Minneapolis again.

The stage design had man layvers, curves, and steps reminiscent of a topographic map made out of cardboard. “June” the opening song started slow and let the fire build until Welch exploded into dance and the first of many wild runs on stage, her soft flowing dress accentuating her movements. The 8 piece backing band (and not they are not called the machine – check out her wiki page for that story) included a harp – the first I recall seeing on stage at a rock show.

To call Welch’s stage persona magnetic would not give her proper credit. A softly spoken “Hello Minneapolis” would have been a simple greeting from anyone else. Here it was a promise of things to come, an invitation.

She made use of space available to her on stage, getting close to fans, staying out of reach at first. Her hand reaching out to them across the pit, fingers moving and dozens of hands reaching back out to her in return, yet not quit touching defined the first part of the set for me. I liked her music but feeling the buildup that many of her songs have and the release to soaring heights that is her signature in person was something entirely different. We loved the lights, they were warm and simple but very well suited to the performance enhancing it rather than trying to overpower with a single color. 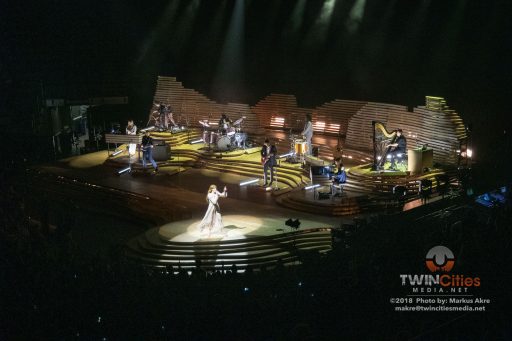 As the show went on Welch chatted more with the crowd, at one point asking them to hug the person next to them. She went out in the audience a couple of times and stood on the barrier held up by security. During the last song “Shake It Out” a fan threw a pride flag on stage that promptly became a cape as the moved on stage. After the encore, Florence remained at the edge of the stage talking with fans.

Ed Sheeran may have had more fans that night (there is a ton of completion for our entertainment budget this week), but 8,000 fans, my daughter and myself loved every minute of Welch’s performance. A thank you goes out to Kara, my daughter for contributing to this review. I had to leave 2/3s through the show to catch Jain at the Fine Line – stay tuned for that review 🙂

Encore: Big God \ Shake It Out

As someone who writes about live concerts, I am supposed to have a clue about major Minnesota artists, right? Turns out, I suffer from a bit of tunnel vision when it comes to music genres […]

Decisions, decisions! It was a very busy year of concerts for me. Not quite Langen-esque, but definitely the most shows I’ve ever attended in a year. Between shows I reviewed, photographed, or just attended for […]