It is not often that I cover an artist and leave at the end completely speechless. Tuesday night was definitely one of those special evenings. My journey to downtown Minneapolis was complicated by the remnants of winter’s first real freeze and snowfall that occurred just 24 hours earlier. However, the weather and the crazy traffic were not going to deter me from covering a long time favorite. For the first time back in the Twin Cities in many years and after a 3-year music hiatus, Evanescence treated their fans with a stylistic re-imagining of their past music in their Synthesis Tour stop at the SOLD OUT historic State Theatre.

Synthesis, Evanescence’s 4th studio album, released on November 10, 2017. Synthesis presents listeners with a reworked take on their music that is still uniquely Evanescence with a fusion of orchestra and elements of electronica, but still retaining the heart of the sound they’re so well known for.

I am not sure the crowd really knew what to expect from the concert, especially with this level of divergence and depth. However, as the lights dimmed, they enthusiastically greeted the band with cheers, screams, and loud excitement. Appearing in a stunning black and red gown reminiscent of an opera singer, accompanied by a 18-piece orchestra and the other members of Evanescence, lead singer Amy Lee wowed the audience with her powerful and (at times) haunting vocals. Switching between a standing center stage and sitting at the piano, Lee solidified her competency as not only a compelling vocalist, but as a classical pianist. Her attack on the piano was anything but a somber, mellow performance. Lee’s excitement to perform shined through brilliantly, putting her all into every song, backed up by her talented band and visually accompanied by a brilliant light show reminiscent of classic rock performances. 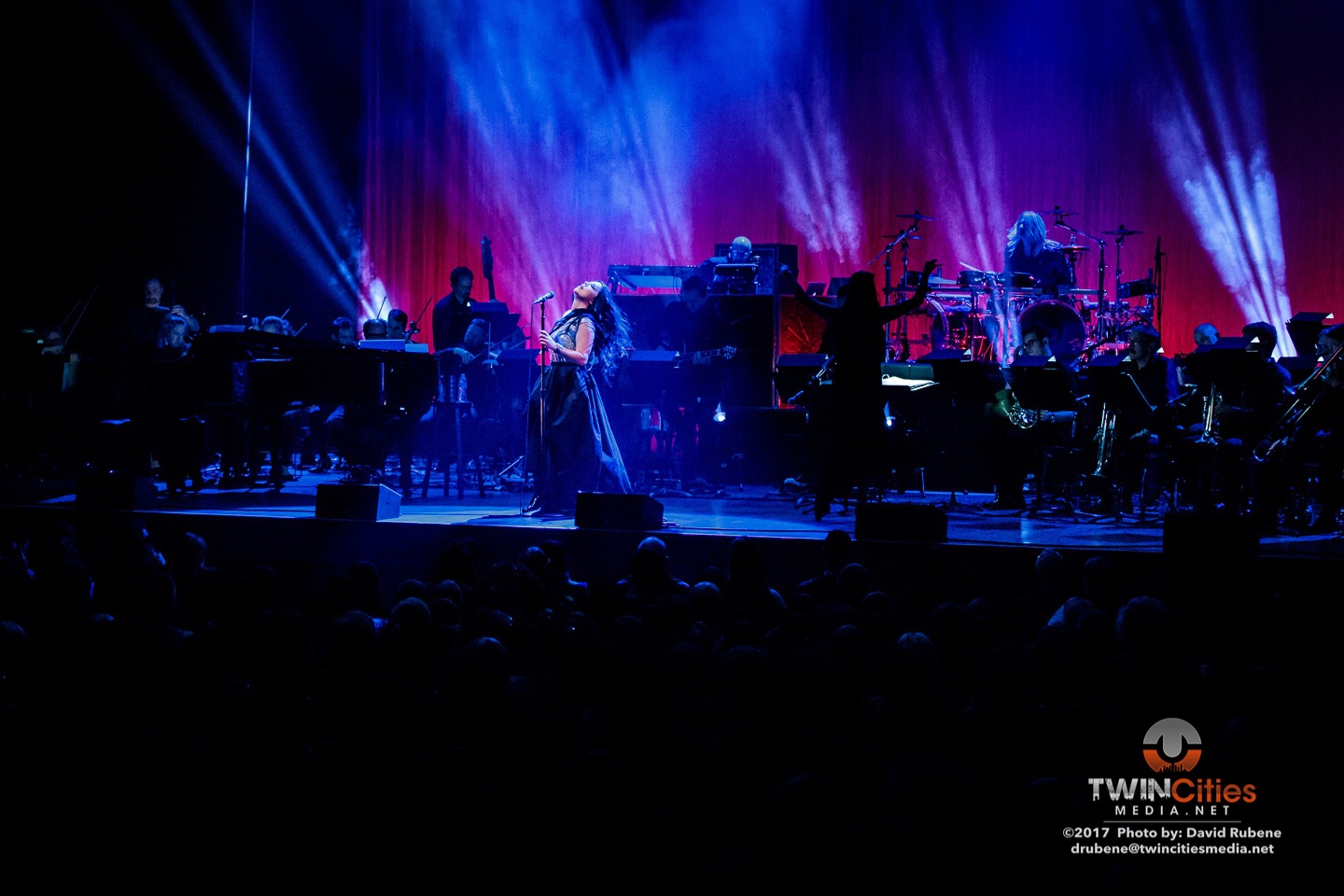 The set-list was incredible, ranging from their newest single, Imperfection, all the way back to the song that launched Evanescence into the public eye, Bring Me to Life, with the arrangement being performed without the heavy drums and guitars and instead replacing both those and the male vocals with a gorgeous string arrangement and allowing Lee’s astounding voice to ring clear. This one truly sent chills throughout my body. The set-list also included many songs off the Synthesis album such as the classic My Immortal, the haunting Lithium, and the lamentful Lacrymosa. Lee also surprised the audience with her solo song Speak to Me and Good Enough from the band’s 2006 album, The Open Door. The performance wrapped up with the Weight of the World.

The performance was incredible and heartfelt on many levels, with the audience’s energy and enthusiasm hard to contain. As I left the venue and drove home, the time was spent in constant reflection of a beautiful and epic evening.

Eels Bring Their Brand Of Deconstruction To First Avenue

There is something to be said for downtown Minneapolis at the end of a beautiful early summer day.  The air is a little softer limbs move a bit more freely.  Downtown fans, be they baseball […]

It’s been a very long time since I’ve been to The Garage for a show; so long that I honestly can’t remember what the last band I saw at this venue was or even what […]

Saving Abel returned to Minneapolis and played the Cabooze

Friday night’s show was a highly anticipated Saving Abel event at the Cabooze. My wife is a huge Saving Abel fan and always is a must see when in Minneapolis. There were four Minnesota bands […]