Fresh from a nationwide tour supporting Greta Van Fleet, Los Angeles-based rock band Dorothy has announced the final leg of their Freedom Tour this winter with special guest Spirit Animal. The band will perform songs from their second full-length album 28 Days in the Valley, which is available worldwide. See below for complete tour dates.

“I’m very excited to get back out on the road with Owen, Eli, Jason and Eliot in January,” says Dorothy Martin. “We will be supporting our album 28 Days In The Valley and our single “Who Do You Love.” This is the final leg of the Freedom Tour so I expect it to be magical.”  The Freedom Tour stopped in Minneapolis back in January 2018 and now returns 13 months later. That is a long tour. Spirit Animal is the opening band. Tickets for the February 1st show (7pm doors, 8pm show, 18+) at the Varsity Theater are available HERE 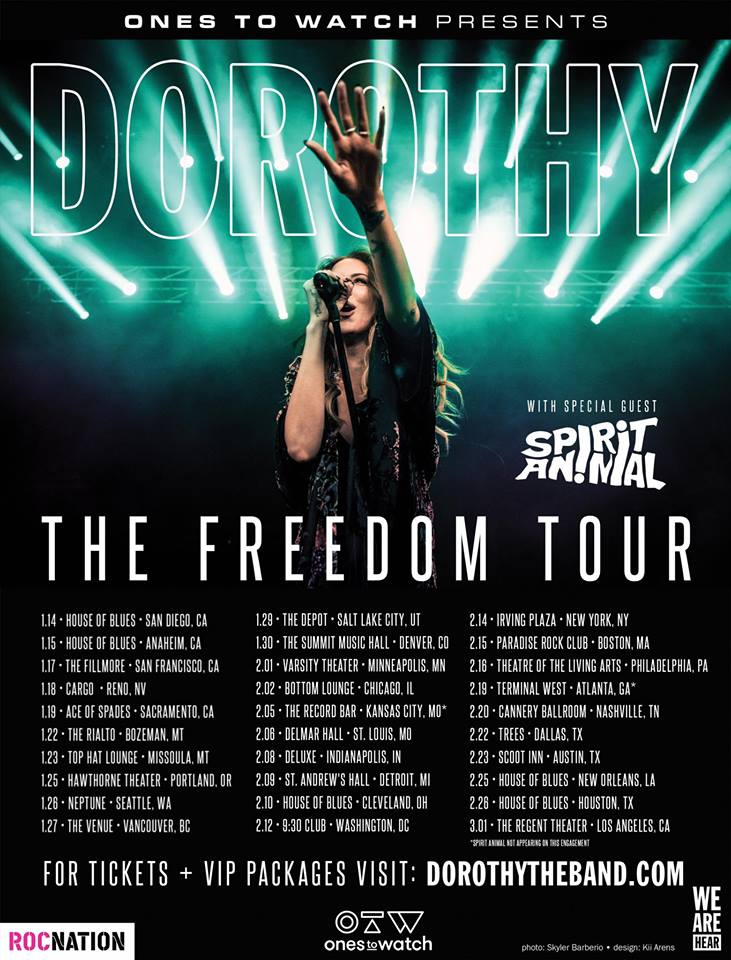 Dorothy was built around Dorothy Martin, a singer who was born in Budapest but raised in San Diego. As a child, she started singing early and eventually made her way to Los Angeles. Rolling Stone named Dorothy one of the best 50 Best New Artists of 2014 and soon after, JAY-Z’s Roc Nation signed Dorothy. Martin recently put together a new, high level, and powerful band including guitarist Owen Barry, guitarist Leroy Wulfmeier, bassist Eliot Lorango, and drummer Jason Ganberg. The band is managed by We Are Hear and represented by Roc Nation.

Standing there in her full rock regalia, messy hair, leather boots, and that glimmer of confidence in her eyes, Dorothy Martin, singer/songwriter and namesake of the Los Angeles rock band Dorothy, takes the microphone in superstar producer Linda Perry’s studio and goes into full rock star mode. She was on fire. She thought she nailed it. Not quite.

“I was like, ‘I don’t know what’s up with you,” recalls Perry (P!nk, Christina Aguilera, Gwen Stefani), who produced, engineered, and co-wrote several tracks on Dorothy’s second full-length album, 28 Days in the Valley, for Jay Z’s Roc Nation. “You just made this incredible band sound like fucking shit and there’s not one vocal I can keep here. Are you drunk?”

The singer was up partying until 5 a.m., so when she rolled into the studio at 11 a.m. the effects of the night were on full display. So Perry, who also manages the band, kicked Dorothy out of the studio with this firm warning: “If you feel you can’t do this, tell me now because you’re wasting my time. You are better than this. Call your sponsor, go to a meeting, get your shit together because these songs are great and we are going to make a fucking great record.”

It was a major turning point, for sure. “I hit my rock bottom that day,” admits the Budapest-born, San Diego-raised artist. I sounded like shit. I felt like shit. I looked like shit. I was making my band suck. I was erratic. I was crying. Linda sat me down and handed me my ass.”

It was the wake-up call the artist needed. It was that of a phoenix rising from the ashes moment. Martin began to look inside for the answers and found the strong, confident, empowered woman that she had been hiding. Not only did she make an evolutionary turn as an individual and artist, but the band
— which also includes guitarist Owen Barry, guitarist Leroy Wulfmeier, bassist Eliot Lorango, and drummer Jason Ganberg — made that “fucking great record” Perry had hoped for.

“It was very humbling, but necessary,” says Martin. “This was a spiritual journey and very healing, and because of that it’s an unapologetically honest record. Somehow Linda knew I had more to give as a singer and writer. I used to hide behind the tough girl sound, but she taught me that there is power in my vulnerability and that’s what you get on this record.”

“Flawless,” the first single, is one of those vulnerable songs. The boot-stomping rocker kicks off the 13-track album with the heartbreaking lyrics, “You said you loved me, but you threw me out in the garbage/Now I’m starting to stink but everybody thinks I’m flawless,” but by the end of the song Martin’s pain turns to an uplifting feel-good anthem of love as she sings, “Coming out of all my darkness/Now that I’m flawless/ Can you feel it?/Can you feel it?”

“It’s about an ex who really did a number on me,” reveals Martin. “This one came fast to me. It was very subconscious… like I’m channeling them. Linda pulled the lightness out of me, both personally and musically. This record is definitely still bold, but it’s happier. It’s kind of like the butterfly coming out of the cocoon, which is why the band logo now is a butterfly.”

The bluesy rocker, “Pretty When You’re High Boy,” dives further the emotional rollercoaster of her bad romantic choices. “We’ve all dated that beautiful boy who likes the ganja too much. He looks like an angel, but was anything but. It’s kind of an ode to those surfer stoner boys and girls of the world. I worked out a lot of stuff on this record,” she laughs.

Even with more tender moments, 28 Days in the Valley still has the in-your-face bluesy, gritty rock and roll fans loved on 2016’s ROCKISDEAD, and their recent standalone single, “Down To the Bottom,” which hit No. 35 on Billboard’s Mainstream Rock chart and which Rolling Stone called the “perfect mix of blues thunder and alt-rock guitar crunch.” But, added to that thunder this time around are more layers of emotion fueled by less metal, more California desert rock vibes.

The powerful ’60s-tinged “Who Do You Love” takes you down the fast lane of psychedelic desert rock perfection, while “Ain’t Our Time To Die” harkens back to the band’s trademark dirty rock sensibilities. The record takes several uplifting turns as heard on “Mountain,” “Freedom,” and “White Butterfly” where it’s hard not to feel the spiritual journey and awakening Dorothy has embarked on.

It’s the kind of record that has a pulse and beckons to be played live from beginning to end… and there’s a good reason for that. “We recorded the old-school way like the Stones did. After writing, we did a good amount of pre-production and worked out the energy and vibe of the songs and then we went in and recorded live, usually in just a few takes. Nothing on this record is programmed. It’s raw and real and honest,” explains Martin, who led meditation sessions with her band before each session to set the right intention and loving energy.

Coming off an album with as much critical acclaim and fan love as ROCKISDEAD — which hit No. 1 on Billboard’s Heatseekers Chart, No. 5 on Top Hard Rock Albums, and featured two songs (“Raise Hell” and “Dark Nights”) in the Top 40 on Billboard’s Mainstream Rock chart — can be intimidating for most bands going into their sophomore record. Critics compared Martin to some of the greatest female artists of our time, such as Amy Winehouse, Patti Smith, and Grace Slick, even calling her “a revved up Adele teetering on the brink of chaos.”

The praise was equal for the band as Rolling Stone magazine named Dorothy one of the best 50 Best New Artists, while Billboard likened the group’s “Wicked Ones,” which was featured in Levi’s and Gatorade spots, to a blend of Black Sabbath and the White Stripes, and Vice’s Noisey dubbed “After Midnight,” which featured actress/model Suki Waterhouse in the music video, “the perfect modern rock concoction.”

Those kind of accolades are enough to make any young band shake in their boots. But, not Dorothy.

“I had no fear coming into this record,” Martin proudly states. “We were in capable hands and I finally felt empowered to be even more of a songwriter than I was before. I finally learned to trust my intuition and my heart, and to get out of my head. You know, the main message of this album is to not live in fear; it’s to transform everything in your life to be on the frequency of love, which is so powerful and all healing. That’s what this record is all about.”

Wielding airtight songcraft and a genre-defying sound that proves 808s and guitars can coexist in harmony, Spirit Animal make music that both bottles and transcends the moment. The Brooklyn, NY-based band – singer Steve Cooper, guitarist Cal Stamp, drummer Ronen Evron, and bassist Paul Michel – made a striking debut with 2013’s viral smash, “The Black Jack White,” quickly earning them more than a million plays on Spotify alone. Relentless touring followed, as did 2016’s debut EP, World War IV, highlighted by another hit single, “Regular World,” which drew more than 3 million Spotify streams worldwide. As a result, Spirit Animal has received major attention from a variety of high profile media outlets, including Consequence of Sound, Entertainment Weekly, and The Washington Post. Spirit Animal released their debut full-length album Born Yesterday on August 3rd, 2018.  Check out the video for their cool song “YEAH!” below.

Track By Track: Symphonic Metal Band AfterTime Talks About The ‘World We Lost’

When you hear about the music genre Symphonic Metal, you immediately think of European bands. It seems that the Nordic countries in Europe have a stronghold on the genre, and do so with extreme pride. […]

Sometimes you go looking for nostalgia, and sometimes nostalgia finds you. I felt this way when I saw singer-songwriter William Ryan Key (formerly of pop-punk band Yellowcard) play a solo show last Sunday night at […]

Culture Club Sends a Packed House Back To The 80’s

Boy George made Culture Club a vital part of ’80s pop culture. Alongside Culture Club, he produced some of the era’s most recognizable hits. Treasure Island Casino in Welch, MN stood as a true testament […]