Don’t miss the power trio, The Winery Dogs, when they are at First Avenue on Monday May 20th.  The Who Let The Dogs Out Tour 2019 is the supergroup’s first tour in nearly three years.  Vocalist and guitarist Richie Kotzen made his mark with Poison and Mr. Big.  Bassist Billy Sheehan has been rocking for decades with Steve Vai, David Lee Roth, Mr. Big and others. And drummer Mike Portnoy was the co-founder of progressive metal superstars Dream Theater.  Damon Johnson is the opening act. Doors open at 7pm and music begins at 8pm for this 18+ show. Get your tickets HERE.

You know what they say: Familiarity breeds creativity. Just witness the aptly named Hot Streak, the supercharged follow-up to the self-titled rabidly rocking 2013 debut of the three-piece musical dynamo known as The Winery Dogs. Hot Streak shows the powerfully pedigreed trio’s initial burst of collective chemistry was no accident, from the sturm und headbang of “Captain Love” to the propulsive uplifting vibe of “The Bridge” to the introspective acoustic harmonic convergence of “Fire.” If these three Dogs thought they captured lightning in a supper dish the first time around, Hot Streak barks ups the aural ante into exciting new territory.

“We elevated the band to the next level,” says vocalist/guitarist Richie Kotzen. “I wasn’t nervous about it at all. There’s always that worry with a follow-up record when you have a first one that’s so well received, but I believed in it from Day 1. I knew in my heart if we made a record that wasn’t as good as the first one that we wouldn’t release it, but I know I did my best on every song. I also like the fact that there’s a commonality between the first and second records — and there’s also an evolution too, as we’ve dug a little deeper.”

Adds drummer Mike Portnoy, “The mission of this band is to write catchy songs, and not have the musicianship overpower them. That’s the icing on the cake — but the cake itself is always the song and the vocals. Every song on this album is memorable and catchy, and you’ll wake up whistling them all the next day.” For a drummer accustomed to having superstar status in the progressive music realm, Portnoy feels he’s done some of his best work with The Winery Dogs. “It’s been refreshing to play music that’s so easily digestible all across the board by any listener, whether they be a metal fan, a prog fan, or a classic rock fan,” he admits. “I think The Winery Dogs have something to offer for everybody.”

Some of The Winery Dogs’ intrinsic universality has to do with the way each band member understands how to serve the song first and play off each other, rather than showboat their own chops. “It’s the great advantage of this three-piece band,” observes bassist Billy Sheehan. “We always have each other on our radars pretty tightly. I can see when Richie’s going for something or if Mike is going for something, and I can either lay a path down for them and get out of the way, or get behind them and help push them towards it.” Sheehan clearly relishes his role as The Winery Dogs’ anchor. “As a bass player, I’ve always been aggressive in my playing, but my job is to lock in with the drums,” he notes. “If you’re aggressive and you’re all over the place, it’s a mess. So I’ve always tried to use that as my focus point — and the point is to play as an ensemble player, as opposed to an individual. Fortunately, I’ve worked with Richie a lot in the past [in Mr. Big], and I love his playing. Same with Mike. If you’re willing to step back and get out of the way and enjoy what those guys do, it’s a lot of fun being a supportive member of this band.”

Kotzen heartily agrees. “These two guys are playing in a way that not many people can play,” he marvels. “I mean, there’s no one else who approaches playing the bass guitar like Billy Sheehan. The thing that’s unique about us is that we are obviously playing real songs with real lyrics and real melodies, but we have these moments of musical chaos where we go crazy and play these things the average musician wouldn’t be able to play.”

On Hot Streak, The Winery Dogs have found themselves sniffing around outside their comfort zone to expand their musical horizons while staying true to their power-trio roots, as songs like the subtle whirling dervish “Spiral” and the aforementioned “Fire” easily attest. “‘Fire’ is a great example of Richie’s ability to create something that’s very poppy or very mainstream, something that you could hear Sting or Sade doing,” observes Portnoy. “It’s an unusual left-turn for us,” concurs Sheehan. “I’m glad we’re not playing it safe and just doing songs that automatically fit in the category of what we did on the first record. Some of the songs are a little different, and we definitely took chances. But you have to do that — otherwise, you don’t grow.”

The album’s funky, hard-driving title track is fine evidence of such growth. “That one came from a bass lick I did sitting around and warming up,” reveals Sheehan. “It was something I did for years — my adaptation of a Stanley Clarke move. I did that lick with a little tag on the end of it, and Mike just played along to it. It caught Richie’s ear and he said, ‘Oh, what’s that? What’s that?’ And I said, ‘Check it out,’ showed him what key it was in, and he jumped right in.” Recalls Kotzen, “I remember being in the studio hearing Billy’s riff and thinking, ‘That’s cool.’ So I started riffing over it vocally; I wasn’t even playing guitar on that original jam session. There are so many little spots on it where we could have stepped on each other. But I was able to go in and play key parts that elevated the song’s progress and, at the same time, leave space for Mike’s drums to do the things that made the song even more special.”

After playing over 100 shows in support of the first album, The Winery Dogs are eager to head back out on the road to get behind Hot Streak. “We’ve now been all over the world, and you have to put those hours in up on the boards to make things grow and evolve,” Sheehan points out. “All that adds into how well we can read each other’s minds onstage, so when you get back to actually performing as a band, the songs all have a greater depth to them.”

As far as Portnoy is concerned, the more original material to cull from live, the better. “This time around, I’m looking forward to having two albums and 25 or so of our own songs to choose from,” he says. “We can even keep the set completely, exclusively Winery Dogs material if we want. That’s the sign of a real band. When the first album came out, a lot of people were writing us off as a supergroup or whatever, but we wanted people to understand this wasn’t just a ‘project.’ It’s a legitimate band, and we want to make many albums together in the future.”

Sheehan relishes the thought of playing a lot of Hot Streak onstage. “The original material opens up the set list quite a bit,” he notes. “We can pull from both records to make the live shows a little bit less formulaic and predictable, because sometimes we’ll play three or four shows within a 100-mile radius, and we have people coming out to all of those shows.”

Kotzen loves having the broader set list option as well. “I always like the idea of not doing the same thing, so I very much like bringing the new songs into the set,” he says. “That keeps the whole thing turning. You don’t want to keep playing all the same songs every time we go on tour. In the beginning, the question was, ‘Is this a real band?’ And I thought to myself, ‘Well, we’re not a mirage! We’re three real people, discovering and making music together.’ So yes, it is a real band. As long as we’re inspired and excited about making music, we’ll keep going.” The more time The Winery Dogs play together onstage, the sharper the band will become. “That’s something that comes with playing together over time within the trio, and also the knowledge you acquire in playing with other people,” Kotzen theorizes. “There was a world of difference from the first time we got onstage versus the last show of the last tour. And there’s still room for more growth to move beyond where we are now.”

Portnoy feels the future of the band looks quite bright. “I may be in 46 different bands right now, but The Winery Dogs are my priority and my home base, and everything else revolves around that,” he confirms. “It’s the same with Billy and Richie. It’s something that all three of our hearts and souls are fully into.”

That level of commitment ultimately leads The Winery Dogs to reaching higher ground. “The thing that resonates the most with me is that I feel we’ve taken the band to another level,” Kotzen concludes. “The compositions are stronger on this album. I feel more connected lyrically and musically to what I did on this record than on the last one. I feel we’ve stretched the parameters the band operated within on the first record. We’ve widened the musical scope of the band on this record and moved it forward. That’s what I’m most excited about.” 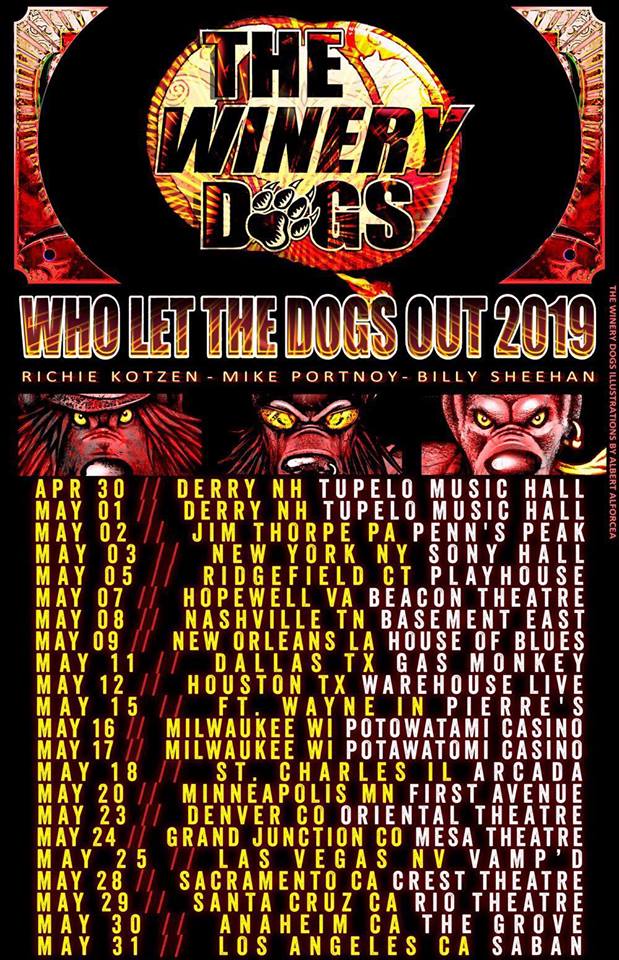 Damon Johnson has been a triple threat…guitarist, singer, songwriter…since his early days of fronting Brother Cane and scoring three #1 singles at U.S. Active Rock Radio in the 90s. Since then he has co-written songs for Stevie Nicks, Carlos Santana, Steven Tyler, and Sammy Hagar. He toured the world for several years as guitarist for Alice Cooper and in 2011 he joined legendary Irish rock group, Thin Lizzy. In 2013 the core of that band morphed into a new group, Black Star Riders, and has released three well-received albums. Johnson’s latest solo album is Memoirs Of An Uprising, released on his own Double Dragon Records label in 2019.

Friday was St. Patrick’s Day and, like every other year, there were dozens of shows I wanted to check out on top of my desire to join my friends in downtown St. Paul for the parade […]

Let me get straight to the point. If you missed The Struts and The Glorious Sons concert Saturday night at the Palace Theatre, you missed not only the top show of the weekend. You missed […]