The Regrettes bring their How Do You Love Tour to the Amsterdam Bar & Hall on Saturday, October 12th.  Unfortunately, if you don’t already have a ticket, you may be out of luck. This all-ages show is already SOLD OUT.  Doors open at 6:30pm with music at 7:30pm.  The opening act is Greer. Check HERE for more information or in case more tickets are released.

How Do You Love?, the sophomore LP from L.A. power-pop outfit The Regrettes, is a an album about the most universal of emotions: love. Throughout the record, 18-year-old frontwoman Lydia Night details the rise and fall of a relationship—from that first rush of butterflies, through a destructive break-up, to ultimately finding peace and closure.

The album arrives on the heels of a few explosive years for The Regrettes. In 2018, the band— currently rounded out by members Genessa Gariano (22, guitar), Brooke Dickson (24, bass) and Drew Thomsen (22, drums)—released their critically acclaimed Attention Seeker EP, as well the passionate standalone anti-Kavanaugh anthem “Poor Boy,” which ELLE deemed “a feminist call to arms.” The group also dominated the year’s top summer festivals, from Coachella to Reading + Leeds, landing on the covers of LA Times and LA Weekly and earning praise from the likes of Rolling Stone, Billboard, USA Today, Variety, and The Guardian. Together, the group has graced the stages of CONAN and Jimmy Kimmel Live!, toured extensively across North America and Europe, and garnered widespread acclaim from NPR, Vogue, Entertainment Weekly, Consequence of Sound, and many more since the 2017 release of their breakthrough debut album, Feel Your Feelings, Fool!

Taking that momentum in stride, The Regrettes are excited to move into their next era. Night, who wrote the vast majority of lyrics on How Do You Love?, came up with the idea after writing a group of songs about her experiences in various real-life relationships. From there, she says, she “realized that they all fit together and tell a story.” This story begins with a spoken-word poem, as Night diagnoses the listener as being “infected” with a “love disease.” From there, the album is off to the races: the first song is the recently released standout “California Friends,” a danceable track about the excitement—and the nerves—that come with meeting someone new. “[It’s about] not knowing your feelings towards that person, really,” Night says, “but your gut is telling you that you like them, or love them, but you just know that it’s not what’s easiest [for you].”

A little less than halfway through the record, with the sauntering “Stop and Go,” Night pumps the breaks a bit: “Stop before we lose control,” she sings, “Let’s take a breath before we go, go, go.” She explains that the song is about realizing that her new relationship isn’t perfect: “A lot of times,” she says, “at the beginning of a relationship, there’s just nothing wrong. But then the problems start popping up. [You discover] there’s a lot you don’t like about the person—a lot of [qualities] you don’t think you can be with.”

By “Dead Wrong,” these problems have become insurmountable for Night. And in the last quarter of the record (“Go Love You,” “Hasn’t Hit You,” and “Here You Go”), she makes the decision to leave—and she’s not looking back. “I feel strong in this decision and I am right,” she says of the emotion that inspired those latter songs. “I’m doing what’s best for myself—have you learned that yet for yourself?”
Although Night ends up alone in her story, the tone of the album’s closer (and title track), “How Do You Love?” is hardly bitter. Instead, it’s a self-reflection on the journey of falling in and out of love—with hope for the future: “It’s about finding bravery through [love],” Night says. “It’s about learning and accepting that, yes, you went through a shitty breakup, but that’s amazing—because all that means is next time you’re in a relationship, you know so much more about yourself and about what you want.”

Returning to Night’s original diagnoses of the listener being “infected” with love, the record makes it very clear that The Regrettes are infected, too—but that’s not a bad thing. The band hopes that the album will provide “the cure,” by showing listeners that no matter how they’ve experienced love—whether it’s romantic, platonic, or self-love—they’re never alone.

This Orange County indie band’s name is a dedication to their friend Emma Greer, the Vine star, who sadly died at age 16 after a long battle with cancer.  The five-piece band is comprised of Josiah (vocals), Corbin (lead guitar), Niko (rhythm guitar), Seth (bass), and Lucas (drums).  Their first two released songs were “Song For Me” and “Bittersweet”.  Watch for more from the band soon. 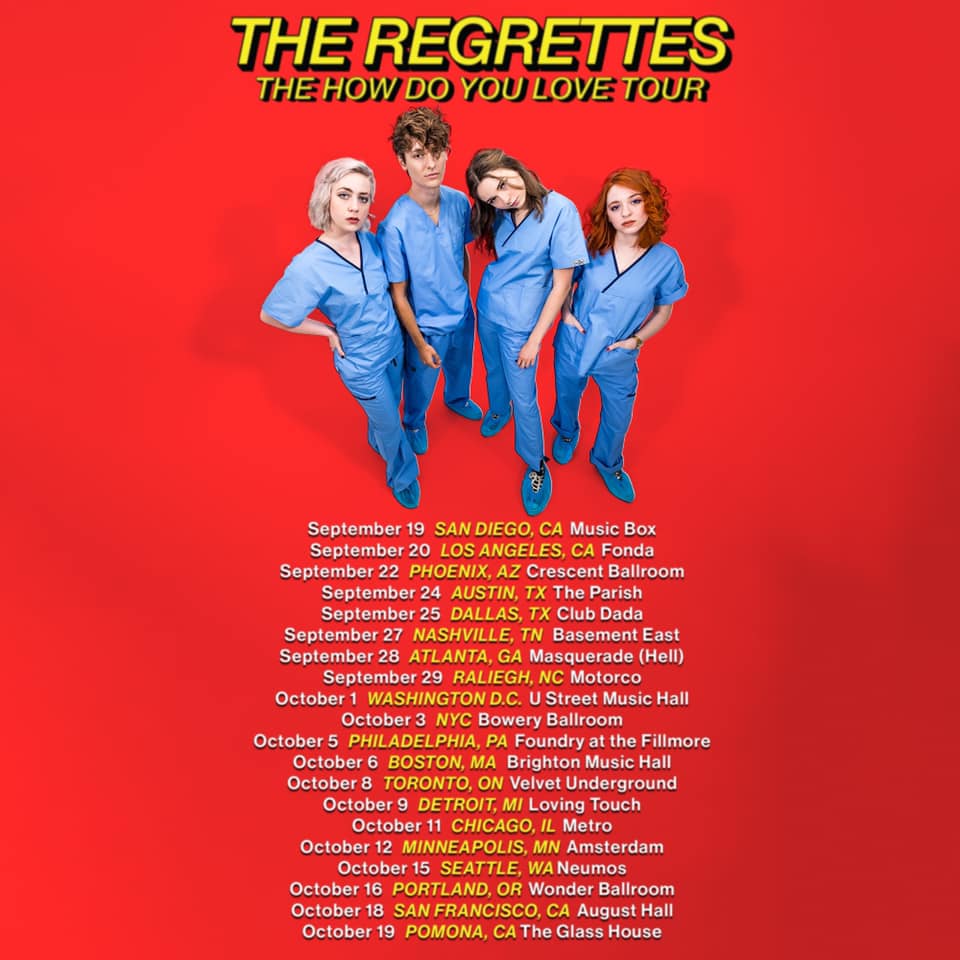 Marah in the Mainsail triumphantly release “Bone Crown” at the Amsterdam

No matter how many or few shows you get to see music fans know the real thing when they see it, and that’s how I felt the first time I experienced Marah in the Mainsail […]

My long, drawn out, Minnesota goodbye to the legendary Triple Rock Social Club continued last night. I can not put into words how devastated I am that this city will be losing such an amazing […]