Some people will say that pop punk is dead. Those people weren’t at the show last night. 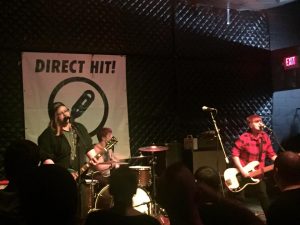 The night started with a great local pop punk band that I had never heard of, 83 Wolfpack. Their sound was something straight out of the early 2000’s and it was everything I could ever ask for. The trio played through their thirty minute set that was filled with smiles and laughs from the stage. The members of the band truly seemed to love what they were doing and, judging by the warm-hearted heckling that was happening between the growing crowd and band, so did the audience. Their set was the perfect warm-up for what was to become a truly great night of music. 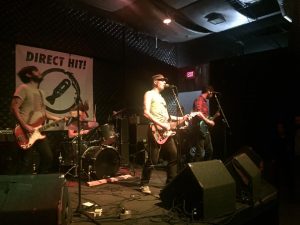 Nato Coles & The Blue Diamond Band were up next. To say that these guys know how to entertain would be an understatement. I’ve seen them a couple of times and, each time, I am blown away by their realness and talent. Their music has a much more just classic rock feel to it than the other bands but it was a nice addition to the line-up last night. Like usual, these guys really connected with the crowd. I love the way singer Nato Coles feels like your best friend when he’s on stage performing even though you’ve never met him before. He’s just that type of guy that makes you feel comfortable.Their music is fun and watching them is even more fun. It doesn’t matter how crabby you are when you walk into one of their shows, as soon as Nato Cole & The Blue Diamond Band take the stage, there’s a smile on your face.

They look like a hodge-podge of people. My friend and I were talking after the set trying to figure out what the string is that pulls them all together. We couldn’t come up with anything other than music. Being able to watch such a mis-matched group of people play great music with smiles on their faces is one of the most uplifting things you can experience. It doesn’t matter where they come from, what type of music they typically like, what they’re wearing… they are together as one when they are on that stage and that is beautiful. 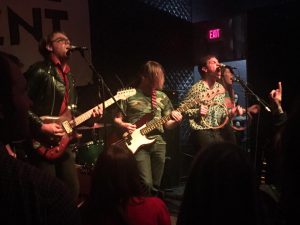 The next band to take the stage was the one that ended up stealing the show and stealing my heart. Tenement. To say these guys were fun would be the understatement of the century. I don’t even know how to explain what happened during their (all too short) twenty minute set. I can’t help but smile ear to ear while trying to write this because it was just that much fun.

Their music was upbeat and poppy with an attitude to match. Watching the two auxiliary instrument players flawlessly switch between tambourine, shaker, violin, saxophone, and back to the tambourines was nothing short of amazing. I thought that three tambourines being played at once would give me a headache but I learned last night that the only thing it causes is a good time and an urge to dance.

Much like Nato Coles & The Blue Diamond Band, Tenement looked like just a hodge podge of people that really have nothing in common but, as soon as they took that stage, it all made sense and came together perfectly.

I wish I could say more about these guys because I fell so head over heels for them but I really don’t have much more to say. Typically I stand in the crowd and take notes on my phone so I have something to write about the next day but that didn’t happen last night. I was so captivated by Tenement that I forgot I would have to write this today, hell, I think I forgot I even owned a phone. Long story short, make sure you go see Tenement (along with all of the other bands that played last night). They’re more than worth your time and support. 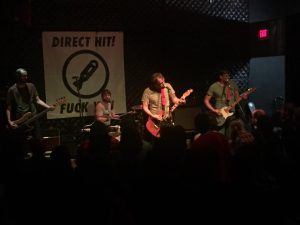 I had already chalked my night up to being one of the better concerts I have been to recently but there was still one more band, Direct Hit!. I’ve been addicted to these guys for awhile now and was super pumped to finally get a chance to see them live. These guys are very much a pop-punk band but seem to lean a bit more towards the punk side of things. Seeing them live last night was exactly how I wanted it to be after obsessing over their recordings for some time.

They were full of energy and, even though it was way beyond my bedtime, I somehow got my third wind during their set and didn’t want it to end. They trucked through their set playing every song I wanted to hear and some new songs I hadn’t had the chance to memorize yet. Their set was fun and powerful and it was obvious that the crowd was loving it as a small, friendly mosh pit opened up in the crowded venue.

I just wanted to have a drink with a friend, enjoy some music, and get home at a decent time last night. That all changed because I was so captivated by each band that took the stage last night.

Death Metal took over Skyway Theatre Sunday night with 4 bands headlined by Morbid Angel. Show goers found an escape from the cold that felt like the 9th ring of hell. There was a sea […]

The day started off on the wrong foot, I woke up late, my car needed repairs and it was pouring rain. I worked the day away counting down the hours until it was finally time […]

I recently found out the Blaine Velodrome was closing and jumped at the chance to get inside the oval and shoot the action. I have wanted to shoot a bicycle race for a while and […]