When I first noticed Diamante’s show on our schedule a few weeks ago, I did a double take looking at the venue. The Piggy Bank? A quick search got me some basic info and I reached out to Diamate’s PR folks to get approval for our photographer. Fast forward to yesterday and the photographer had strep throat. Our number 1 unwritten rule: “Don’t infect the audience or the artist” so I found myself covering the show.

Turns out the Piggy Bank is run by the company behind Crave and Union and by the looks of it just recently just added live music booked by LiveNation. There was a bit of confusion about door time but once that was sorted out, everyone filled in for the first set to start on time. We are spoiled by First Avenue’s smoothness and it takes a bit of trial and error to get the complexity of running a music venue right. Piggy Banks biggest challenge is probably the low ceiling, so don’t expect high jumps (unless the performer is wearing a helmet). Sound was great, and as an added bonus the food was quite good as well. There numerous vegetarian and vegan options. With a bit of luck, the Piggy Bank will turn out to be a great smaller venue. 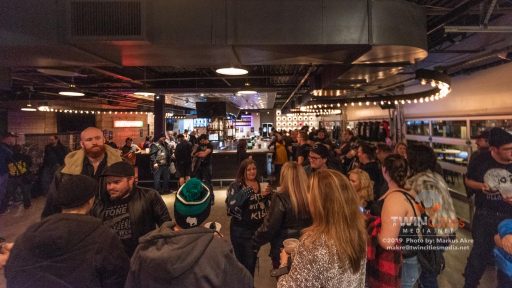 Caster Volor was the first band on stage. This was my first time seeing (or honestly even hearing about them). The band describes themselves as Industrial Theatre. Even on the small stage their set was a wild spectacle. Caster Volor channels everything that’s great about hair metal bands into one tidy package. There’s not a single moment where at least one member of the band is not doing something that’s over the top Rock. Guitar poses, devil horns, tongues, hair flips it’s a never ending visual barrage. If you are looking for a band that will get your show started in a hurry, book those guys, just make sure to step up your game, because they will give 110 %.

The next band, Cold Kingdom has been a staple of the Minnesota Rock scene since 2014. I first saw them at Northern Invasion a couple of years ago and since then their lead singer Dani departed amicably last year. So I was curious to see the band’s new singer Elissa Pearson. I am happy to report that Cold Kingdom struck gold twice in a row. The connection between fans and the band was evident from the first moments and remained through their 30 minute set. Diamante started her first headlining tour last night and is headed to numerous US cities in the next couple of weeks. Aptly named the “Blue Balls Holiday Tour” it matches her hair as well as her middle name (Azzura is blue in Italian). Earlier this year she became known to many as opener for Breaking Benjamin. That level of stage presence hit the small venue like a ton of bricks. As a photographer I may grumble a bit about working small venue where I don’t have the luxury of a pit, but nothing beats the connection between artist and fans when they are close enough to touch. And somehow small venue shows dominate my favorite sets at the end of each year. Her high energy songs combined with her personal magnetism made this a memorable night for everyone in the crowd.

Considering the amount of concerts I attend, it’s rare for me to be surprised by the band. Lord Huron turned out a rather positive surprise. I had heard a couple of their songs on The […]

When the World’s Loudest Month announced their 2015 Rock festivals, they introduced a new Festival to the month. The upper Midwest have always been a stronghold for rock bands and until this year a festival […]

Tech N9ne Proves He Can Still Kill It At Myth Show

Tech N9ne’s tour this time around was called the “Independent Grind” tour. To say that he has been on a grind would be an understatement. He is constantly touring (although last night was my first […]