To sum up yesterday’s Culture Club show in one word: Effortless. Boy George and the band looked relaxed, natural and every single person at a packed Myth had a great time. Starting the show was LA band Groves, a trio consisting of Stephen Salisbury (Vocals/Guitar) Reid Guidry (Bass), and Will Smith (Drums). We only got a chance to see the last part of their set and found them lively and they certainly did get the crowd in mood. 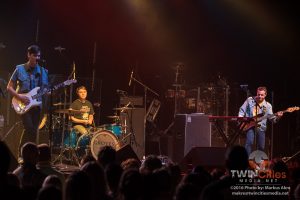 After being one of the most iconic bands of the 80s Culture Club went through a series of short reunions (in various lineups) before getting back together for good in 2014 in its original form with Boy George, Roy Hay, Mikey Craig, and Jon Moss. They began working on a new album and a series of sold out shows led them to a World Tour this year.

Even though the tour left Boy George, in his own words “A bit woozy” we got Culture Club at its best. The set started with “Church of the Poison Mind” and George, dress in a suit that can only be described as loud, was all over the stage interacting with fans and band members. Sound and lights were quite good. Fans were clearly excited about the show with several of them dressed up in their best 80s fashion and one quite credible Boy George copy in the front row. Culture Club played most of their hits and a few of their new songs. George was chatty introducing songs.  He explained Culture Club as “happy, sad music, and that’s called an oxymoron”.  Even with 3 backup singers and a horn section the vibe from the stage was casual, focused on having fun and a great time. Overall a great show by a band that put their stamp on a decade.

Set List: Church of the Poison Mind / It’s a Miracle / I’ll Tumble 4 Ya / Move Away / Human Zoo / Everything I Own (Bread cover) / Black Money / Interlude / Time (Clock of the Heart) / Like I Used To / Different Man / Miss Me Blind / The Crying Game (Dave Berry cover) / Do You Really Want to Hurt Me? / Victims / More Than Silence / The War Song Encore: Runaway Train / Karma Chameleon / Get It On (Bang a Gong) / Purple Rain

MarchFourth Brought A Night Of Joy To The Cedar

The Cedar Cultural Center was surprisingly not as full as I expected upon arrival with only 10 minutes before the opening act. The empty hall quickly filled up though as the local Eastern European Folk […]

With a holiday weekend in full bloom, we had a special opportunity to cover Adam Levy’s CD Release Performance for his first solo album Naubinway. Being very familiar with Adam as the front man for […]

The Fine Line music cafe will transform from a sleepy building by day into a rousing meeting place for metal heads by night as Windhand and Satan’s Satyrs will be playing on November 8th. Earlier […]