Last night brought us the last show of this year at the State Fair’s Grandstand closing out 13 shows that spanned a range of styles and audiences. Trying to create that lineup must have been one heck of a challenge. There’s increased competition for artists that can play a 17,000 seat venue as the Casinos in Minnesota have stepped up their efforts made for some interesting choices. The reporter sent by City Pages called it “The marching spectacle of B-listers, has beens, and almost was-es“. I for one,  beg to differ: The artists matched well to the audience at the State Fair. And the crowd consistently seemed to have a great time. You have to accept the bands for what they are, yes some are past their heyday, but they still put on a good show and a bit of nostalgia never hurt anyone. Oh and Hairball? C’mon Dude, how can you not like an over the top, tongue in cheek spectacle like that? So, if you saw a fellow with a frown on his face scribbling in a notebook, that was probably the City Pages guy – pretty much everyone else had fun.

Alas, back to Monday’s show. The Life Tour has been crossing the US for the past several weeks.

Opener Tom Bailey was one of the founding Members of the Thompson Twins. That band varied in member count through the years but 2 things hold true – There never were any Twins and none of their group members had that last name. At their most popular they were a trio of Tom Bailey, Alannah Currie and Joe Leeway.

In 2014 Bailey began performing Thompson Twins song solo and gathered an all female backup band. He just released his debut solo album “Science Fiction” in July and included the title song as part of his set.I never had a chance to catch the original band so seeing the songs performed live for the first time was a treat.

Unlike the two other bands on the Life Tour the B-52s only took a short hiatus over their storied career. I had seen them in Munich in the late 80s when they were just starting to move from underground band to main stream. Even though it’s been a few decades since then there’s still the funky vibe that made the band stand out. With a couple of their members pushing 70 it wasn’t as wild and crazy on stage as the sound may suggest, and as artist get older, photographers get pushed back further and further from stage. But fans turned the grandstand into a giant party singing along and dancing to every single tune.

But one impression defined their set for me: As I was headed to my seat after the photographing the first 3 songs, I passed the line for the porta-potties: Pretty much everybody in line was dancing and moving to the music, nuff said.

Culture Club was headlining the evening. If I had to wager on which broken up 80s band was most unlikely to retired my money would have been on Culture Club, yet they reunited a few years ago. When i caught them at Myth Live a couple of years ago I was impressed by their playfulness and the fun factor of the show. They did not allow press photos this time (the photo is from their show back in 2017) and added a few cover songs to their set. I was surprised when they opened with Bowie’s “Let’s Dance”. Boy George was his usual gregarious self, chatting between songs. They closed with another cover, “Purple Rain” and with as many covers of that song I have seen, it was one of the better ones.

Did last night’s show change anyone’s life? Most likely not. But about 10,000 fans stuck it out in the rain and had a great time. And by my standards, anyone who can entertain a crowd of that size has a long way to go before they can be classified as a “Has-been”

Set List: Let’s Dance / It’s a Miracle / I’ll Tumble for Ya / Let Somebody Love You / Time / The Truth Is a Runaway Train / Do You Really Want to Hurt Me? / Everything I Own / Different Man /

Miss Me Blind / Church of the Poison Mind 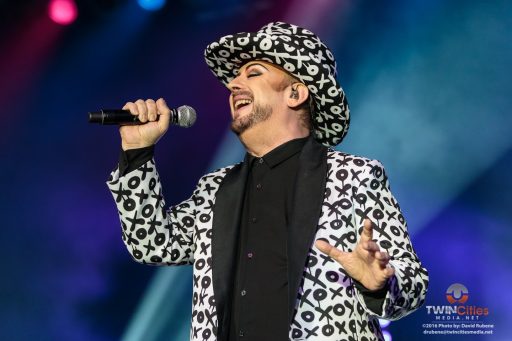 It was the eve of the holiday weekend and celebrations were in full swing at The Entry. On this night, the band XIII Arrows were taking the headlining spot for the release performance of their new […]

Portland sister Trio Joseph is well known to listeners of The Current with their distinctive voices and harmonies demanding your ears’ attention whenever one of their songs is played. They turned out to be my […]