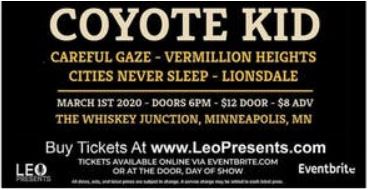 Coyote Kid will be at Whiskey Junction on March 1st with a pack of (luckily not Coyotes of the less-musical descent) bands; You can’t miss out on this night of not one, or two, but rather 5 bands total, all of similar origins as the home-grown headliner that we’re starting to realize isn’t going anywhere, anytime soon – not if their promising-yet-already-awesome music has anything to say about it.

Minneapolis based “aggressive story music” band Coyote Kid will be leading a wolfpack of howls from Careful Gaze, Vermillion Heights, Cities Never Sleep and Lionsdale. Listen: these bands will get a ton of love in our review, but if we gave rundowns of everyone here you’d be reading this come the time your coffees done tomorrow, so I can’t wait to tell you all about them when the time comes, but our headliner will take the stage after they all perform, as well as now in this article.

Coyote Kid is known for their large-scale concept albums that rely heavily on “narrative and cinematic elements” to create their music, they call for anyone that might be interested in hearing their hybrid sound/style that is considered to be that of “My Chemical Romance… with a spaghetti-western, Tarantino twist.” The group consists of Austin Durry (vocals and guitar), Cassandra Valentine (vocals and keyboard), Austin Wilder (bass and vocals), John Baumgartner (trombone), and last but surely not least Kian Dziak on the drums. Their debut album, “Thaumatrope,” was released in 2015 and since then the group has been aiming to take things to the next level.

If you’re busy that night but still want to see Coyote Kid, they’ll be downtown to play this Sunday – come say hi! As for this show, though, you can get tickets HERE and get a taste of what is to come while you open a new tab to find your tickets:

Pretty (Spectacular) In Pink: A Sunday Night Felt Like A Saturday with Motherfolk and Coyote Kid

It was a normal (cold as folk) Sunday night in Minneapolis, but howls and folking awesome jams were erupting from the Skyway as Coyote Kid and Motherfolk took to stage, in that respective order. As […]