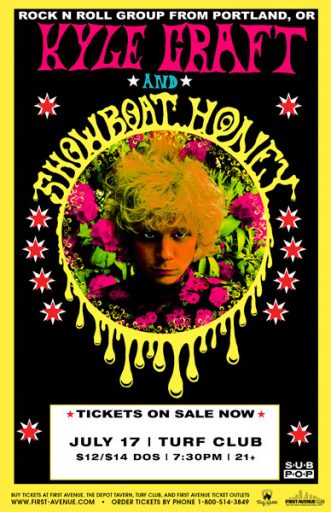 There is this curious equilibrium to existence: In order to create balance, the universe must giveth, and the universe must taketh. Kyle Craft, along with his now solidified backing band dubbed Showboat Honey, know this all too well. And this is why their self-titled album, the contemplative yet restless Showboat Honey (Sub Pop Records, July 12, 2019) reflects that sturm und drang. “This is basically an album centered around bad luck and good fortune hitting at the same time,” Craft explains “Then, out of nowhere, I find love. Everything went to shit except that. I guess that’s how life works.”

No track better captures this duality than the sweeping “Sunday Driver,” about sticking to your guns, despite a universe of blowback. “At this point, you get baptized by certain fires and start to walk with the dead a little bit, like nothing can harm you anymore,” says the Portland-based musician. “That’s what self-love sounds like to me, as aggressive as that sounds.” The sticky-sweet title of the album is lifted from the brightly choral “Buzzkill Caterwaul” (“Once you were the showboat honey/ But your ship sailed out”). “I wanted to make something that sounded like a raucous collision of Leon Russell and Patti Smith,” he says, “But ‘Buzzkill Caterwaul’ was the only tune that ended up showcasing that vision.”

Though aesthetics veer from song to song, Showboat Honey’s steadfast formula remains the same. Drummer Haven Mutlz holds down the machine with a ’60s/’70s fast-molasses groove that locks in with the slinky rolling bass of Billy Slater. When Kevin Clark isn’t bouncing across the piano, his mellotron strings swell in and out of frame. Jack of all trades Ben Steinmetz’s organ parts well up from the deep of the songs, while lead guitarist Jeremy Kale’s solos rip through them like electricity. On top of it all, sits the tongue-in-cheek phantasmagoria created by Craft’s lyrics.

Velvet Negroni at the Icehouse – TICKETS 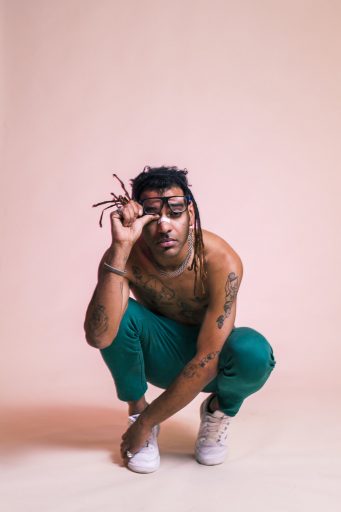 On Neon Brown (out summer 2019 on 4AD), Velvet Negroni is a griot relaying the life and times of his own island—it’s a singular place, with the squeak and thrum of guitar strings looped over drum machine beats accented by steely marimbas, all creating a pocket for one of the most authentic and original artistic voices ever committed to tape.

You follow his voice as it rhymes in double time, or hiccups and la-las through a break, or croons from a room down the hall, as it unfolds into another story of lost love, or another joke about lost drugs, as he tries to make sense of a life spent in the (sometimes harrowing) pursuit of communion.

Turns out what sounds like a lonely island is in fact the city of Minneapolis. Velvet Negroni grew up in an outer suburb of the Twin Cities as Jeremy Nutzman, a black kid adopted into a white evangelical Christian family. His fundamentalist missionary of a mother drove him to virtuosity, both as a classically trained concert pianist and a competitive figure skater, but he had to climb out his bedroom window to play guitar in his first band.

In 2016 after years of performing under a schizophrenic rotation of various aliases, Nutzman finally landed on a persona that he felt he could be proud of. It was in a fancy cocktail bar in Austin, Texas that he hatched Velvet Negroni. A tour opening for Bon Iver followed, as well as a writing credit on Kid Cudi and Kanye West’s “Feel the Love” off their 2018 album Kids See Ghosts. That same year, he released his first singles on B4 sounds, “First Time” and “Crybaby.”

It was in the summer of 2018, together with his friends, producers Psymun (Future, Young Thug, Dua Saleh) and Tickle Torture’s Elliott Kozel, that Velvet Negroni composed the stories on Neon Brown, stories he’s been waiting a lifetime to tell. 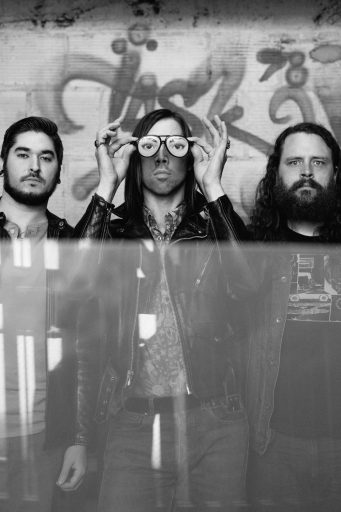 “Dark Matter” follows Savage Moods’ debut record, “Death Ray” released in 2016. On “Death Ray”, the band committed to the 3-piece formula, forgoing layers of overdubs in favor the distinct sound of just 3 instruments and a voice. On “Dark Matter”, however, Savage Moods has added the studio as a 4th player. Mix engineer Eric Martin (Jillian Rae) and guest synthesizerist Doug Deitchler (Beasthead) add textures throughout the record, creating a rich sonic environment for Hovorka’s storytelling.The title “Dark Matter” refers to all that life offers us in between. People out of place, ways of life off the beaten path. Seeking the obscure knowledge and experience.

Minnesota Waldorf School’s 4th annual music festival is a celebratory exploration of many great musical styles, including folk, bluegrass, the blues, and more.

Audience favorites, The OK Factor and The Sawtooth Brothers are returning, along with beloved soloist, Ellis. Joining the mix are Red Yarn, and rising star, Annie Mack. Another returning act is afternoon headliner, The Okee Dokee Brothers. Closing out the night is Nicholas David, a fan favorite from the hit TV show, The Voice.

Excellent music is not the only thing planned for this all-day, kid-friendly event. A craft beer garden, food trucks, curated vendors selling a broad scope of merchandise, and plenty of kid activities, will be set up on the school’s 8-acre campus.

DO RE #METOO: A Night of Sexist Songs Sung by Righteous Feminists at the Cedar – TICKETS 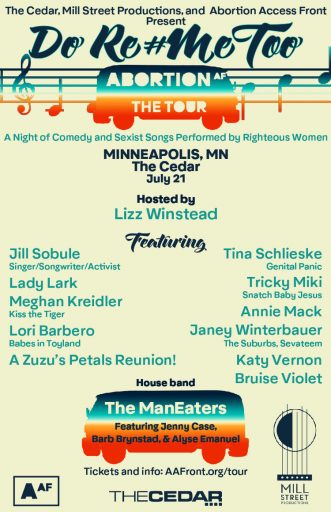 Daily Show Co-Creator Lizz Winstead and her reproductive rights juggernaut Abortion Access Front (formerly Lady Parts Justice League) are back at The Cedar Cultural Center on July 21st as part of their national Abortion AF Tour. This is the second year they have brought  “Do Re #MeToo: A Night of Sexist Songs Sung by Righteous Feminists” to Minneapolis. This incredible evening will be an extravaganza of the most horrifying and hilariously sexist songs performed by some of your favorite national and local musicians including Jill Sobule and Tina Schlieske!

Do Re #MeToo is a fun and powerful evening that reminds folks just how pervasive sexism and misogyny are in our culture. This power line-up of women and non-binary musicians will cover some of the “classic hits” with all the irony they so richly deserve. What better way to get folks dancing and inspired to fight back against sexism, than with righteous women musically burning it all down!

The power line-up of women and non-binary musicians for the Minneapolis stop of the tour will include Jill Sobule, Tina Schlieske (Tina and The B Sides), Lady Lark, Lori Barbero (Babes In Toyland), Annie Mack,  Janey Winterbauer (The Suburbs, Wits, Sevateem), Danielle Cusack and Emily Schoonover (Bruise Violet), Meghan Kreidler (Kiss The Tiger), Katy Vernon, Triki Miki, and a Zuzu’s Petals reunion all backed by The Maneaters! What better way to remind folks of all the ways popular songs have so horribly demeaned women than by listening to badass performers belt them out?

Hosted by Lizz Winstead, this show will feature her hilarious banter about these songs in between sets, putting the evening into a feminist context.