Delilah Daybreaks at the Cabooze – TICKETS 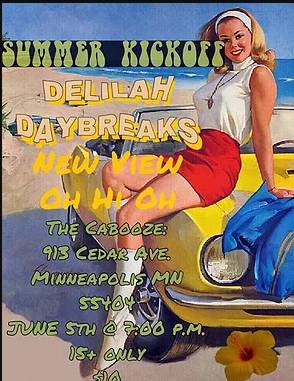 Delilah Daybreaks started back in 2015 are a skate punk and head banging band. There’s three of us in the band, not including our manager Liz. Doyle Alexander who is the lead guitarist and vocalist (17), Owen Hiber who plays the drums (16), and Mycah Rapoport who plays bass (16).

Her Crooked Heart at the Icehouse – TICKETS 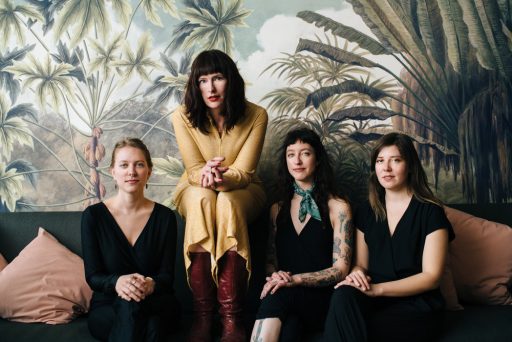 With To Love To Leave To Live, Minneapolis-based Her Crooked Heart presents a debut record unique in form, made up of cyclical narratives and intertwining histories, each informing the next. The result is a transformative song cycle, led by a charismatic personality, wholly indifferent to expectations of genre and instrumentation. Rachel Ries, the writer, multi-instrumentalist and producer behind Her Crooked Heart, demonstrates immense vulnerability and multifaceted musical craftsmanship to deliver a personal and profound musical soliloquy on love, leaving and the life that follows after burning it all down.

To bring these songs and this record to the stage, Ries has enlisted a powerful group of women; women who can, in their way, take on the feminine, humanist mantle of Her Crooked Heart and make it their own: Siri Undlin (Humbird), Adelyn Strei (Adro), Hilary James (We are the Willows, Bathtub Cig). The quartet blends classical and electric guitar; piano and vintage synths; cello, woodwinds and drum triggers. This merging of acoustic and synthetic sounds is all in service of the voice: four part vocal harmonies that shift from ethereal to an elemental wail, always telling a story of transformation.

In 2013, after two and a half years of marriage, Ries found herself touring a record around the world, accompanied by a stack of divorce papers in a pocket of her suitcase. She had left her marriage and a good man in New York City and leapt into the untethered unknown. What transpired was in turns euphoria and despondence; old lessons learned in new ways. The songs on To Love To Leave To Live are a compassionate and at times wry catalogue of those tumultuous years, unflinchingly captured in the studio with co-producer Shane Leonard. Several collaborators, some of whom Ries met while touring with Anaïs Mitchell, helped create the vast and varied soundscape: Brian Joseph (Sufjan Stevens, Paul Simon), Rob Moose (yMusic, Alabama Shakes), Mike Lewis (Bon Iver), Alec Spiegelman (Cuddle Magic), Pat Keen, John DeHaven, Ben Lester and Rachel’s own siblings.

Brownmark Nation at the Muse – TICKETS 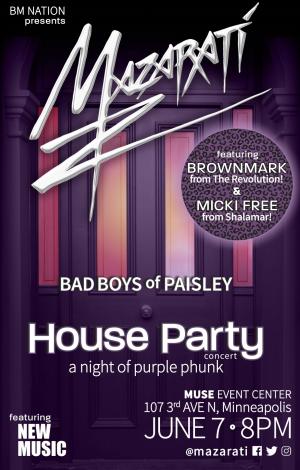 After reuniting with The Revolution two years ago, BrownMark felt there was more unfinished business in his musical past.  Reaching out to members of the original 80’s group he helped found, the newly reformed Mazarati will now hit the road with their dual cohesive Funk Rock Show.  The debut performance will take place where it all began, in Minneapolis. Mazarati/BrownMark Nation re-defines contemporary Funk. The live show will consist of both new material from Mazarati and music that Brownmark has previously written and produced for the collaboration.

“Mazarati has always been a group that represented me. While I was touring with Prince, I always had the thought of one day being part of Mazarati in the future, but it fell apart in my absence,” explains BrownMark.  “ I have been wanting to put my band back together for decades but life happens. Only now have I finally found the time to live out my dream and put Mazarati back on the road with me in it.” 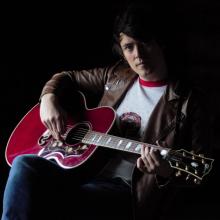 Trapper Schoepp is a young man who’s befriended a strange and diverse cast of characters during his 2​7​ years. That small army of rogues and rebels, drifters and dreamers, soldiers and schemers populate his songs, their tragedies and comedies, their lives and deaths recalled in his finely etched musical vignettes.

The Minnesota-born, Wisconsin-based tunesmith and teller of tales (both tall and true), just returned​ ​with his second effort Rangers & Valentines (Xtra Mile Recordings). The record follows his critically acclaimed 2012 debut Run Engine, Run. That LP earned notices in Rolling Stone, American Songwriter and Paste, with the folks at Huffington Post calling him a “master storyteller” and PBS hailing his “sto

On Rangers & Valentines, Schoepp defies the limitations of the standard-issue Americana platter, hopping genres – you’ll hear lots of brass, backing singers and B-3 — as the songs build to delirious musical highs. His narratives, meanwhile, find subjects in the narrow margins of society, the strange twists (literal and metaphorical) in the weather, and the vagaries of a troubadour’s transient life – with lyrics that flash a lacerating wit and humanist streak that’s at the core of his craft. 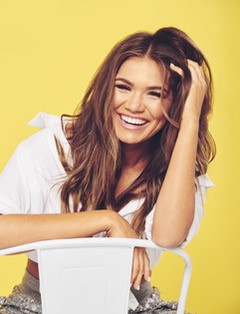 Already earning more than 25 million streams worldwide, the Texas-bred musician — who “is as ultra-gregarious in personal conversation as she is sensitive in her recordings” (Billboard) — kicked off 2019 making her international debut at C2C in London. Anderson has toured with Bobby Bones, Russell Dickerson, Brett Eldredge and Chase Rice, and she recently joined fellow country singer

Jimmie Allen for a “radiant” (Billboard) rendition of the award-winning song “Shallow.” The cover was praised by The New York Times, noting the two R&B-inclined vocalists “harness the song’s raw power and shellac it with a layer of controlled cool.”

“Armed with a big voice and exuberant stage presence” (Rolling Stone Country), Anderson will open for Rob Thomas as direct support on his 44+ date Chip Tooth Smile Tour across the US

Ocean Alley at the Entry – TICKETS

Ocean Alley have captivated audiences around the world with their infectious melody lines and memorable blend of psychedelic-surf-rock. Their acclaimed second album Chiaroscuro debuted at #15 on the ARIA Chart in Australia, and was awarded the coveted triple j Feature Album, going on to be nominated for Australian Album of the Year by the station. The album has also been praised as one of The Music’s ‘Top 30 Albums of 2018’, with lead single ‘Confidence’ being certified gold in Australia having moved in excess of 35,000 units.

2018 was the year where Ocean Alley continued to carve their place in the international music scene with their relentless touring schedule in support of the new album. The year saw the band play 96 shows around the world, visiting 10 countries to perform in 60 different cities. Back on home soil, Ocean Alley sold over 25,000 tickets to their Australian shows including 15 sold out dates – the six-piece using their growing profile for good, partnering up with the Cerebral Palsy Alliance to raise over $17,000 to increase awareness of the disability and encourage public support.

Rounding out their biggest year yet, Ocean Alley wrapped up their final North American shows supporting Tash Sultana, before returning home to bring in the new year at Falls Festival. The band look forward to bringing their sun drenched tunes to North America once more in 2019!