Kevin Garrett at the Entry – TICKETS 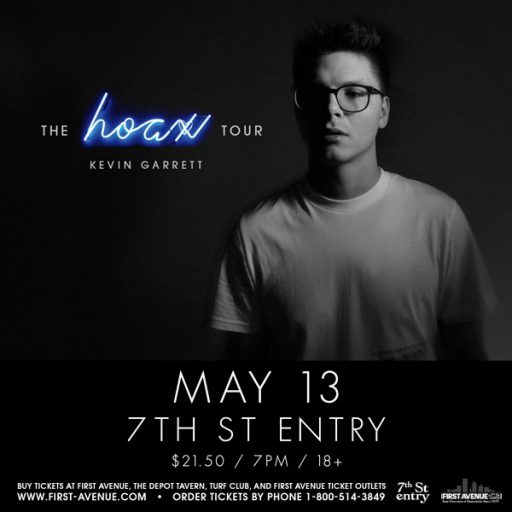 Kevin Garrett twists up soulful tradition with singer-songwriter spirit, lush instrumentation, and alternative adventurousness. The Pittsburgh-born GRAMMY®Award-nominated artist, multi-instrumentalist, and producer echoes the kind of grit meant to be smoothed out only on vinyl and emanates the ambition of a 21st century festival draw on his 2019 full-length debut, HOAX [AWAL].

In 2015, Kevin hit the road with Irish sensation James Vincent McMorrow and unveiled his debut EP, Mellow Drama, which attracted acclaim from The Fader, Complex, Vibe, and Billboard. It also yielded a hit with the singles “Coloring” racking up 30 million-plus streams.

Beyond gigs alongside everyone from Alessia Cara to Mumford & Sons and electrifying festival performances at Bonnaroo, Latitude & Longitude, and Sasquatch, he contributed “Pray You Catch Me” to Beyoncé’s blockbuster Lemonade, sharing co-writing and co-production with the superstar and James Blake. 2017 saw him sell out his first headline tour before spending 2018 recording the new album. Now, his brand of bold and blunt soul unfolds on HOAX and singles such as “In Case I Don’t Feel” and “Faith You Might.”

Mogli at the Entry – TICKETS 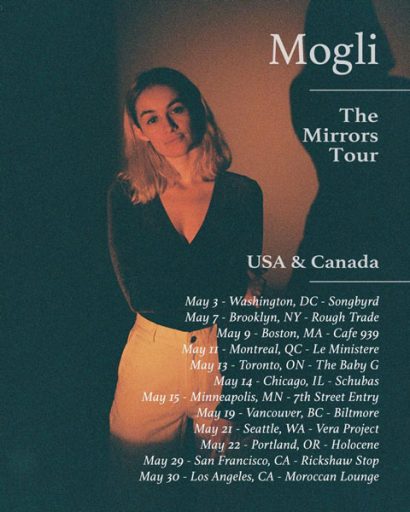 To say Mogli’s curiosity is unparalleled is an understatement. If she’s not making music, she’s crafting films, acting or designing clothes. She believes in female empowerment, sustainability and talking about mental health. “I’m reaching people through my music and I want to use the voice I have to talk about other topics I think are important.” At 25, the German artist has always nurtured a creative and fiery spirit — something that was first born at home.

Instead of jumping jacks, her two mothers referred to them “jumping janes.” Free from gender norms, Mogli was encouraged to believe she could achieve anything a boy could. “I had lots of freedom to explore and was encouraged to learn, just do and not overthink.” Singing before she could speak, Mogli inherently knew that music was her calling. At 11, she auditioned at an opera house where she would sing for 7 years. She spent her teenage years at an acting school, where she landed parts in two shows in the London West End. Growing up in the city helped foster Mogli’s exploration, which has remained a constant in her life.

That exploration helped her gain international recognition in 2017 with the global Netflix release of her film Expedition Happiness, which chronicled the adventures she and her ex-boyfriend had traveling North America for 8 months in a school bus they turned into a tiny house on wheels. During their adventure, she sought inspiration from nature, and penned the album Wanderer, which became the soundtrack to the movie, which she also directed. 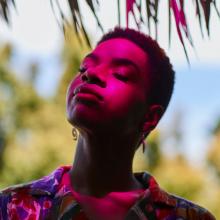 The Harmony of Opposites is a recurring theme in Eastern philosophy, that life’s highs cannot come without its lows. Singer-songwriter Aisha Badru has lived that duality—which is why she devoted an entire album, Pendulum (Nettwerk), to exploring how that which once haunted her now empowers her. “A major theme of every human’s experience is that we’re constantly swinging between good and bad,” she says. “We can’t avoid it. By realizing that the swings aren’t permanent, you begin to develop the ability to control how you feel about the unfortunate events that may arise in your life.”

Though elegantly spacious and radiantly harmonic (often with nightingale vocals), Pendulum reverberates with strong will. Here, humbled pensiveness can erupt at any moment into transcendent battle cries. Pendulum delivers a universal message. But it’s also the sound of Badru revealing how she’s never let any disadvantages or heartbreak destroy her.

The album’s first single, “Bridges,” is about the latter. An atmospheric piece, it manages to make a vocoder seem ethereal. Badru sings: “There”ll be mountains for us to climb / There’ll be days when the sun won’t shine / But I’ll stick to it.” Its video chronicles a couple violently kept apart by doppelgängers, representing the man’s demons. “Those mountains are personal demons. They can rip you apart from the person you love most,” she explains. “It takes perseverance to stick with someone through times where you know they need to fight their own battles without you.”

The world first met Badru through a very different love song. In 2016, Volkswagen licensed the exquisitely hushed, plaintive “Waiting Around”—one of her earlier compositions—for an advertisement. “When I secured that ad,” she says, “my whole life changed.” It finally put money in Badru’s pocket, and enchanted listeners across the globe. 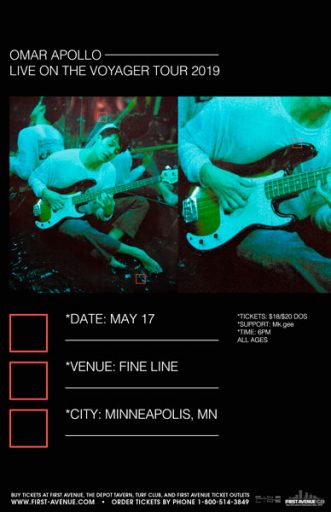 After dropping out of college only 2 weeks in, Omar Apollo, a 20-year old, first generation Mexican-American singer from Indiana, began writing and recording his own mix of jazz, R&B, funk, alternative, soul, and pop music. His parents moved to the US to give their kids a better life and the opportunity to go to college; however, Omar always knew this route wasn’t meant for him.

He began playing guitar at 12 years old, but quit soon after because he got bored of only playing in church. At age 18, Omar began listening to new styles of music and fell in love with the guitar again. His biggest influences are Benny Sings, D’angelo, Los Panchos, John Mayer, Elliott Smith, Cuco Sánchez, Paul Simon, Gary Numan, and João Gilberto. Omar is going to release his debut EP this summer featuring songs in both English and Spanish.