Liz Cooper & The Stampede at the Turf Club – TICKETS 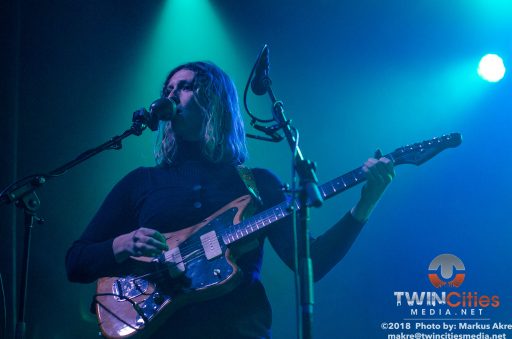 There is a collective energy in Nashville, one that Liz Cooper has poured herself into for the past six years. Liz remarks that the energy in Nashville today is akin to that of Greenwich Village in 1960s New York or the Laurel Canyon days in the 1960s and 1970s and is a product of a collaborative approach to music and art. This community has allowed Liz to be a part of many magically haphazard nights, where the movers and shakers of the Nashville music world, such as Okey Dokey, Becca Mancari, Rayland Baxter, Desert Noises, Morning Teleportation, Erin Rae, Brittany Howard, Cage the Elephant, Michael Nau and many more converge to make music and art and lose track of time. Her latest album is a product of that pulsating energy in Nashville that has had some of the greatest influence in her work.

Window Flowers is the culmination of a year where Liz made a purposeful effort to do something creative every day. Whether it was directly related to music or not, this creative process challenged and inspired her to continually put herself in new situations and pushed her to become a better songwriter and guitar player. The tentative newcomer that is present in her early recordings was all but gone in the making of the album.

Her absorption into the collaborative community is evidenced by guest appearances on Window Flowers including Will Brown (Michael Nau) on the keys, Michael and Ben Ford (Airpark) bgv’s/ guitar and songwriting, Gianni Gibson (Future Thieves) percussion, Leah Blevins on BGV’s, Emily Kohavi (Kacey Musgraves, Eminem etc.) on violin and Steve Dawson on pedal steel. Liz Cooper & The Stampede and their guests spent five days tracking Window Flowers at Welcome to 1979 in Nashville, Tennessee. TJ Elias, who co-produced the album with the band, sparked the relationship by approaching Liz one night backstage at The Ryman Auditorium after hearing her songs through a mutual friend and musician, Cody Huggins.

The Infamous Stringdusters at the Varsity – TICKETS 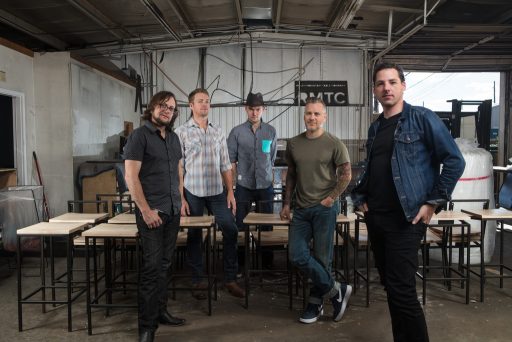 A band should never stop progressing.

Forward motion belies creativity and evolution. A staunch and unwavering commitment to progression is how an unassuming group of five friends can collectively become a GRAMMY® Award-winning force of nature. That’s exactly how it happened for The Infamous Stringdusters. Within thirteen years since their 2005 formation, the band—Travis Book [bass, vocals], Andy Falco [guitar, vocals], Jeremy Garrett [fiddle, vocals], Andy Hall [dobro, vocals], and Chris Pandolfi [banjo, vocals]— have consistently forged ahead, relentlessly exploring the musical possibilities of a “bluegrass ensemble” and breaking down boundaries in the process.

In a genre known for traditionalism, the ‘Dusters have consistently covered new ground, inspired fans, and redefined what a bluegrass band can be. 2018 represented a high watermark for the quintet as they took home a GRAMMY® Award in the category of “Best Bluegrass Album” for their 2017 release Laws of Gravity. Even with such milestones, the members feel like they’re only getting started.

“I’m most inspired by the evolution of the music,” agrees Book. “The band is reaching new heights with our exploration and jamming. The repertoire is deep, and our crew is so entwined in the music and presentation of the show. It’s all come together in the last year or so.”

Max Frost and UPSAHL at the Entry – TICKETS 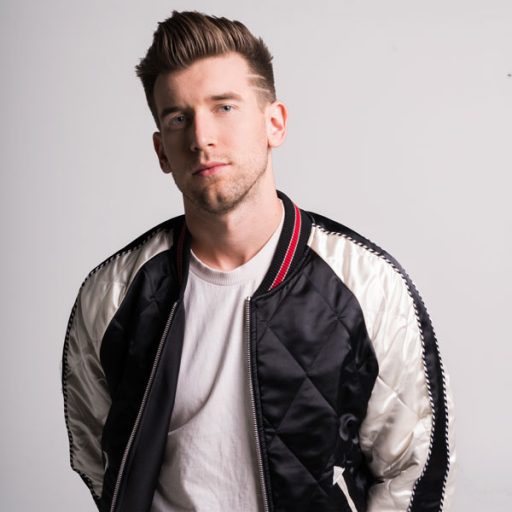 Last year, Max Frost had a creative awakening. Since becoming a professional musician and scoring genre-mashing hits including “White Lies” and “Adderall,” the forward-thinking pop maestro felt he hadn’t shown his true colors. “I realized I needed to completely change what I was doing and what I was trying to create into something a little bolder, a little bit more honest and less controlled,” he says. “I needed to take the veil off and let myself be a little more naked and a little more direct.”

He’d spent nearly his entire life in Austin, Texas, so moving to Los Angeles in 2017 “was about having a fresh start — reinventing myself as much as a person as an artist.” Once he touched down in LA, he immediately got to work creating what turned out to be some of the most inventive songs of his young career. “I finally had the balls to be vulnerable,” says Frost, who once in LA teamed up with Michael “Fitz” Fitzpatrick (Fitz and The Tantrums) and began constructing the songs that would comprise Gold Rush, his major-label full-length debut LP, executive produced by Fitz, with major help from Mick Schultz (Rihanna, Jeremih). 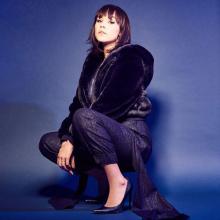 Indie-Pop sensation UPSAHL has every right to celebrate. Last year, she released her first proper single, “Can You Hear Me Now,” a bouncy, rhythmic, and poignant track that set the internet positively abuzz. “It’s a message to someone on the other end of a failing relationship,” UPSAHL says of the song. “It’s the kind of relationship that has been dysfunctional for a long period of time to the point where one person decides it isn’t worth the stress, time, or energy anymore.”

UPSAHL went on to release “Kiss Me Now” and “Rough” (the former produced by Max Frost and the latter produced by Tim Pagnotta & Brian Phillips) that seamlessly blended elements of Indie Rock, Pop, and Electronica. Now, UPSAHL is gearing up for the release of her new single, “The Other Team,” a cheeky, autobiographical track that she wrote about falling in love with her male gay best friend.

“I wrote ‘The Other Team’ on the last day of a month-long writing trip,” says UPSAHL. “A few minutes into the session, the concept just sort of came to me: ‘I think we should write a song about falling for a gay guy.’ Everyone can relate to being into someone that they know they can’t have, whether it’s sexual orientation, or just plain disinterest in you (haha). My best friend Zack is gay, and he and his friends always talk about crushing on straight guys. It’s just something that everyone deals with in one way or another: someone is always swinging for somebody else’s “Other Team,” so I wanted this song to be a playful spin on that.” 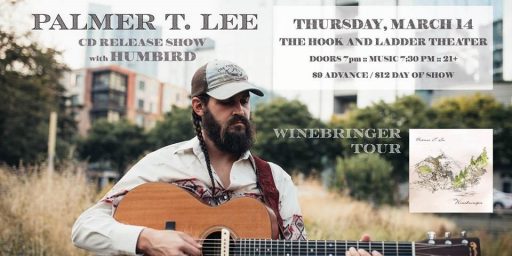 Palmer T Lee was born in Minnesota. As a boy, he liked stories, built fantasy worlds, and to stay awake in math class, he wrote poetry. When he showed his poems to his mother, she connected him with a Native Youth newspaper in Minneapolis, which published his work. The youth writers met once a month with mentors from the community, and there he met Winona LaDuke, and was encouraged to participate in his very first poetry reading. At his second (and last) reading, Palmer decided he did not like the form. Soon he picked up his first guitar for $35, complete with a Save the Whales sticker on the back, and he learned that he preferred to give his words shape through music, with the added bonus that he could hide himself behind the guitar as he shared his thoughts.

A close friend introduced him to the music of Neil Young and Bob Dylan, and he was inspired by Jerry Garcia and Dave Grisman to explore classic folk and bluegrass. His family helped out again by supplying him with two banjos, and he immediately switched his focus to writing and playing songs. He describes his passion for the voice of the instrument: “it felt more natural than most other ways to sound one’s blessed and rare living moments.”

He formed a string band with him buddy called The Boys and the Barrels, and they played together for five or so years in the upper midwest until the band disintegrated, death by natural causes (job promotions, new babies). Palmer went the other way, got divorced, and committed himself to playing music full time. He ran into Kendl Winter at a folk festival and together they started The Lowest Pair. He started playing guitar again, too. Since 2013, the band has released five albums on Team Love, and in 2018 they each took time to pursue their solo work.

His debut album, “Winebringer,” is an intensive look at love and longing that follows the end of a relationship. Here he returns to writing with the guitar, and saves the banjo for only one track. The title was inspired by the writing of the Sufi poet Hafiz, and his collection of poems The Book of the Winebringer. He is attracted to the inclusiveness of Sufi poetry, that it seems at times as if any noun can be switched out with any other noun, that the work will hold its point, that love is always the goal. It’s a raw, emotional album, his resonant voice buoyed by delicate playing, and some help from his friends on mandolin, fiddle, and bass. Palmer says, “This album is me laughing while shake my fist, mourning while I am dancing, grappling with bitter gratitude.” 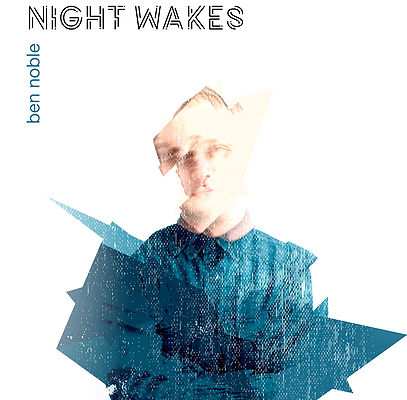 Around this time, Noble also began seeing a professional counselor to face demons that had plagued him his whole life. The re-opening of long-scabbed-over wounds mixed with intense writer’s block caused Noble to enter a season of “night wakes”, or episodes of sharp anxiety that kept him up at night. A miscarriage in the winter of 2018 is what finally drove Noble to write the lyrics for what would become Night Wakes.

It is the lead single from his forthcoming record, which is on track to debut in the fall of 2019. Originally titled “An Open Letter To My Anxiety” it is an attempt to call out and fight against the darkness. We all face our demons when we wake at night.

Mike Mains & The Branches at the Garage – TICKETS 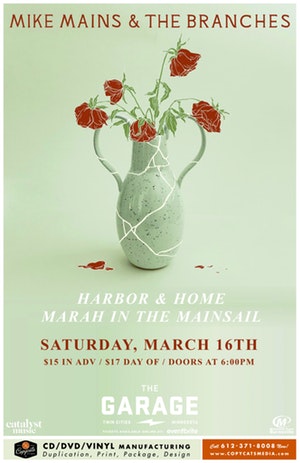 Mike Mains & The Branches will be touring in support of their upcoming third album When We Were In Love, due out 4/5 via Tooth & Nail Records. With Shannon and Mike Mains as the focal point of Mike Mains & The Branches, the new album is an extremely personal account of the heartache experienced during a marital rough patch and the journey to rebuild said relationship. The writing and recording process was a therapeutic one for Mike, who was recommended by his therapist to write songs as a way to work through his pain: “I finally felt brave enough to explore that pain, and a lot of this record feels like someone eavesdropping on my counseling sessions.”

The Black Queen at the Skyway – TICKETS 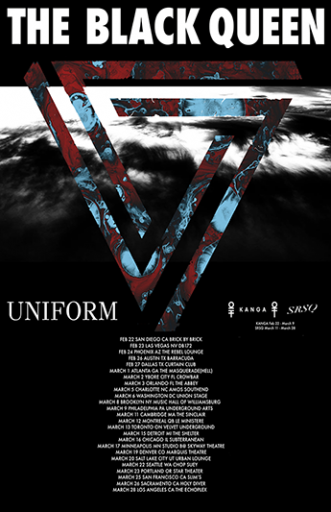 A kind of power synth pop trio, The Black Queen began in casual fashion and developed into a full-blown band treated by its members as much more than an extracurricular project. In 2011, Greg Puciato, Dillinger Escape Plan’s vocalist, and Steven Alexander, a seasoned tech (DEP, Nine Inch Nails, Ke$ha), began working on material with one another that deviated significantly from the former’s main band.

Later in the year, Joshua Eustis (NIN, Puscifer) was added to the fold, after Puciato crossed paths with the multi-instrumentalist, producer, and songwriter at a Puscifer gig.  Puciato’s interests had long involved electronic music — his primary band had covered songs by Massive Attack, Depeche Mode, and even Aphex Twin — and he admired Eustis’ output with Telefon Tel Aviv. The two also shared a love for R&B, a genre detectable throughout Eustis’ recorded history.

Within a couple years, Puciato, Alexander, and Eustis were deeply involved in The Black Queen, living with one another in Los Angeles, and supporting each other through bleak personal matters.

In 2015, they debuted The Black Queen with the ballad “The End Where We Start” and quickly followed it with the relatively uptempo “Ice to Never,” a pair of singles that were closer in construction to Telefon Tel Aviv’s Immolate Yourself than anything by Dillinger Escape Plan. Additionally, these songs featured some of Puciato’s most melodic and restrained vocal performances without sacrificing any feeling. Fever Daydream, their debut album, was released in January 2016.