Joan / Ralph at the Entry – TICKETS 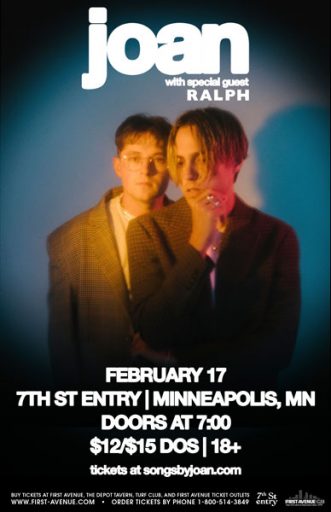 joan creates SUPER infectious alt-pop (think: ‘slow dancing with your crush at prom in the 90s’ meets ‘John Cusack holding a boombox outside of your bedroom window, circa the movie Say Anything’). 2019 was an amazing year for them, their debut EP portra has already been streamed well over 25M+ times and the guys spent time on the road with Flor and Jeremy Zucker. Definitely a must see live show, the guys have honed their craft playing major US tours over the past two years with the likes of The Aces, Alice Merton, MisterWives, courtship and COIN and have played festival shows across Asia where they’re already blowing up.

Born and raised in Toronto, Ralph (Raffa Weyman) personifies real glamour, dancing in the intersection between the contemporary vision of artists like Solange and Kali Uchis, and the allure of yesteryear that iconized David Bowie, Cher, Prince and Stevie Nicks. Ralph’s music is no different; it’s catchy but cool, sexy but smart, edgy but evocative. With an emphasis on lyrics and storytelling, pulling from her personal life experiences, Ralph’s songs are special because they are honest and relatable. 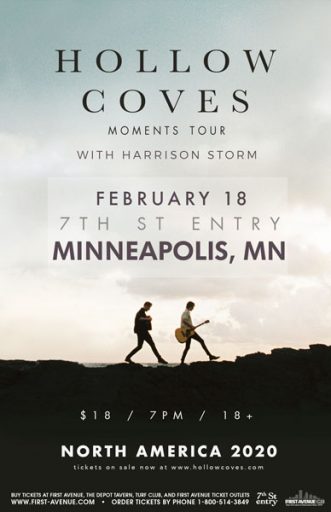 Nothing refracts light quite like music does. Even in the darkest of times, melodies change moods, and harmonies lift hearts. As affirmed by nearly 200 million total streams for the 2017 debut EP Wanderlust and praise from Indie Shuffle, Clash , and OnesToWatch , Hollow Coves carry light within an eloquent, engaging, and entrancing take on indie folk. The Brisbane duo— Ryan Henderson and Matt Carins —strengthen a powerful two-way dialogue with listeners worldwide on their full-length debut, Moments.

Songs act as milestones. Life before and after never quite looks the same. Harrison Storm catalogs life in similar fashion. His music signifies a turning point as change, growth, and evolution follow on the other side of the song. The Australian-born singer and songwriter once again details a transformation on his Falling Down EP and forthcoming 2020 full-length. That transformation ultimately unfolds by way of honest lyrics and bold musical experimentation. 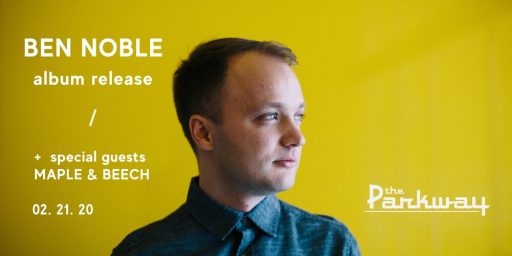 Ben Noble is a Minneapolis-based singer-songwriter who released his debut album, “Whisky Priest,” in the spring of 2017. Fully self-produced and recorded in a cabin, “Whisky Priest” is a journey of exacting introspection. Noble loves the contrast of serene, innocent melodies with a haunting chorus of falsetto voices. Live, he blends delicate melodies with electronic elements for a truly unique sonic experience.

Slow Hollows at the Entry – TICKETS 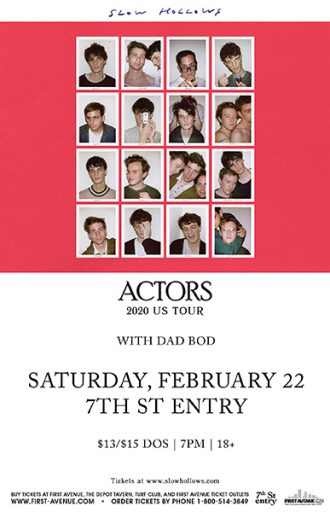 Los Angeles genre-benders Slow Hollows’ third album Actors is the sound of a band and its songwriter unburdening themselves of their previous restraints—the fears and insecurities knocking around in any creative person’s head while making work that will eventually be consumed by others. A lush, complex album spanning the dusky warmth of indie, the rubbery bounce of dance music, and R&B’s soft-focus sensuality, Actors also carries an immediate streak imbued by songwriter/lead singer Austin Anderson and his compatriots, a wide-open exploration of sound as generous as it is intricate.

Star Parks at the Entry – TICKETS 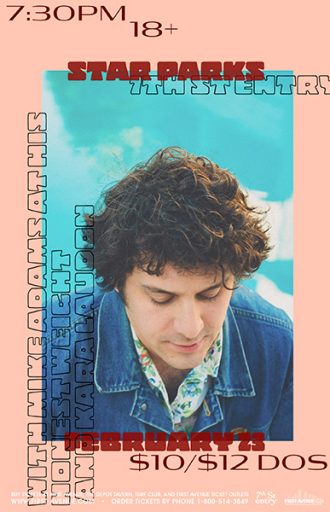 Star Parks is hard to pin down. Since the release of their 2016 debut Don’t Dwell the band has grown into a 7 piece mini-orchestra, a far throw from its beginnings as a solo act of the group’s principle songwriter, Andy Bianculli. Touring France and Ireland as a solo artist in early 2016, Bianculli caught the attention of Dublin based label, Paper Trail Records when a mutual friend heard the then unreleased album and passed it along to Jack Rainey and Dan Finnegan at Paper Trail. In April of 2016, the band released their first single Theoretical Girls. A somber ballad of unrequited love and disrupted fates.