Marika Hackman at the Entry – TICKETS 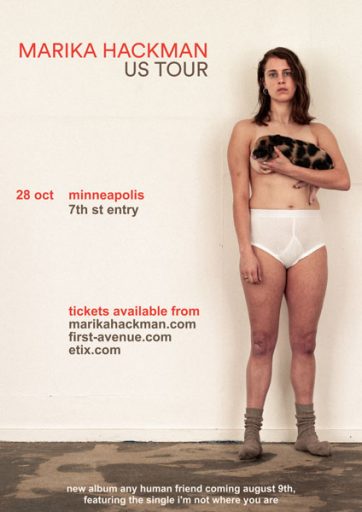 “hand solo,” “blow,” “conventional ride”—these are just a few of the cheeky offerings off Any Human Friend, the new album from rock provocateur Marika Hackman. “This whole record is me diving into myself and peeling back the skin further and further, exposing myself in quite a big way. It can be quite sexual,” Hackman says. “It’s blunt, but not offensive. It’s mischievous.” There’s also depth to her carnal knowledge: Any Human Friend (out via AMF Records and Sub Pop Records in North and South America) is ultimately about how, as she puts it, “We all have this lightness and darkness in us.”

Hackman lifted the album’s title from a documentary about four-year-olds interacting with dementia patients in senior homes. At one point, two little girls confer about their experience there, with one musing on how it’s great to make “any human friend,” whether old or young. “When she said that it really touched a nerve in me,” says the London-based musician. “It’s that childlike view where we really accept people, are comfortable with their differences.” 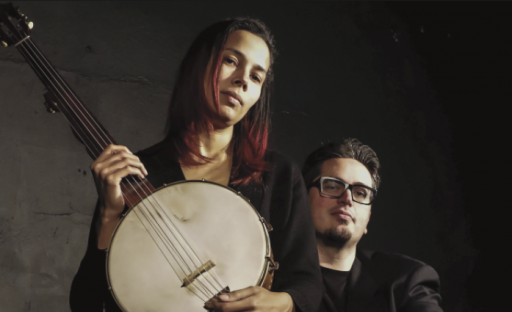 Rhiannon Giddens, a celebrated American artist of folk and traditional music and a MacArthur “Genius” Grant recipient, has performed for the Obama’s at the White House and acted in two seasons of the hit television series Nashville.

Blimes and Gab at the Amsterdam  – TICKETS 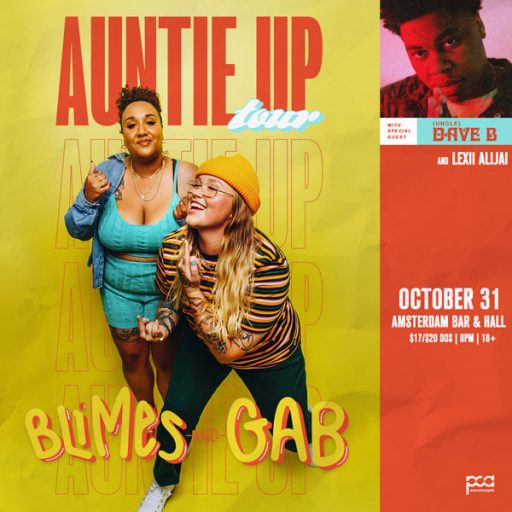 Blimes (SF) and Gifted Gab (Seattle) breathe life back into the game with this classic back and forth. The witty duo play off each others words effortlessly and their chemistry is undeniable on “Come Correct”, which has gained 10 million views across platforms & counting.

Gabrielle “Gifted Gab” Kadushin was born and raised in Seattle, WA’s Central District. Growing up in the church and singing in the choir, she was composing melodies and playing instruments at a young age. As well as music. Freestyle rapping in elementary school turned into Gab professionally showcasing her skills in major venues and festivals across the US. She’s opened for legends such as DJ Quik, Rakim & Slick Rick as well as write ups in major publications like XXL, VH1, Dope & TIME magazine. In 2016, she curated & headlined her own 8 city tour.

From the heart of San Francisco, Blimes Brixton is an MC and vocalist armed with an unmatched passion for artistry. Her musical background extends two generations to a blues musician father and jazz musician grandfather which could justify her keen attention to musicality. Her distinctive voice is globally appreciated; early on in her career, the lyricist joined the likes of Too Short, Adam Vida, & France’s Scratch Bandits Crew on various releases and co-headlined a 25 city European tour with LA rapper Gavlyn. Blimes’ undeniable talent and unique history as a battle rapper sparked collaborative efforts from hip-hop icon Method Man on their release of “Hot Damn”. In 2016, Blimes established her own imprint label, Peach House Records, which is focused on highlighting talented women in the industry. 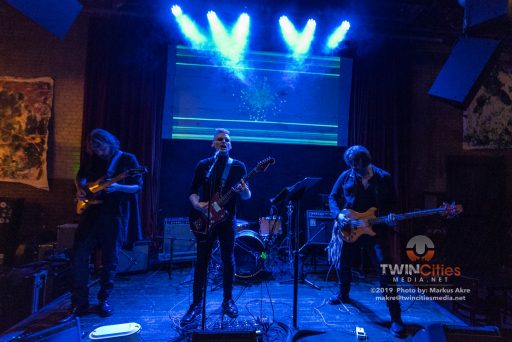 Remember that local band a few weeks ago we couldn’t shut up about? Here’s your chance to see them.

SYM1, Daark, shadingthesun, d’Lakes, LILItH Music, and OF COURSE Count Spookula are all ready to give us the dark and scary vibes we’ve been begging for. Let your inner monster out, howl at the moon, bite somebody, but most of all, shake that BOOty!

HE’S BACK!! Joseph Antognoli is gonna be providing us with hypnotic visuals ALL NIGHT!

Frogleg – Halloween Night Fever at the Hook and Ladder  – TICKETS 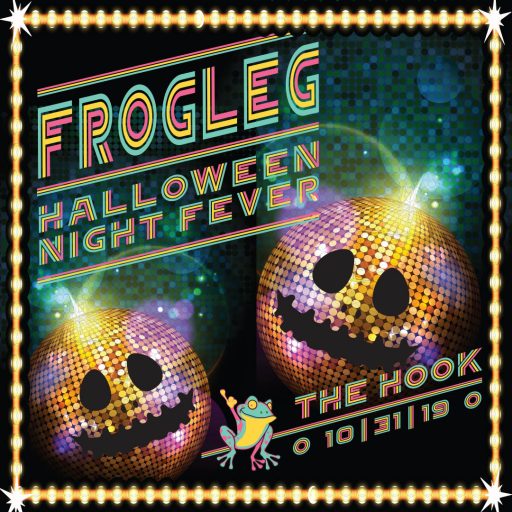 Known for their songwriting and improvisational live performances, Frogleg would be best described as a soul band, as their influences are not drawn from one specific genre. A typical Frogleg show usually features a unique blend of Funk, Reggae, Rock and Jazz exploration. Frogleg has expanded their touring circuit considerably, now including many of the friendly mountain states as well as the greater Midwest.  Frogleg has shared the stage with Steven Tyler, Jeff Austin Band, New Orleans Suspects, Devon Allman, Orgone, Raw Oyster Cult, Samantha Fish, Allie Kral, Robert Randolph and has played multiple dates with Melvin Seals and the Jerry Garcia Band. 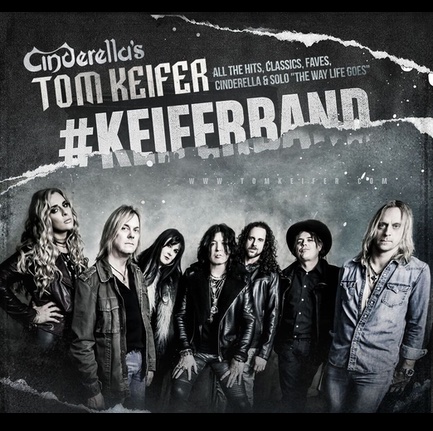 Best known as the singer/songwriter/guitarist of Cinderella, TOM KEIFER and his bandmates #keiferband–Savannah Keifer (Vocals, Percussion, Piano), Tony Higbee (Lead & Rhythm Guitars, Vocals), Billy Mercer (Bass, Vocals), Kendra Chantelle (Vocals, Percussion), Jarred Pope (Drums), Kory Myers (Keyboards, Vocals)–are ready to RISE to yet another peak in their ongoing music journey with the release of KEIFER’s second solo album on Cleopatra Records. It came out September 13 on all formats at TomKeifer.com/RiseBuyItNow, including CD (digipak), vinyl (in your choice of red, blue, or green) and digital.

Devendra Banhart at the Varsity – TICKETS 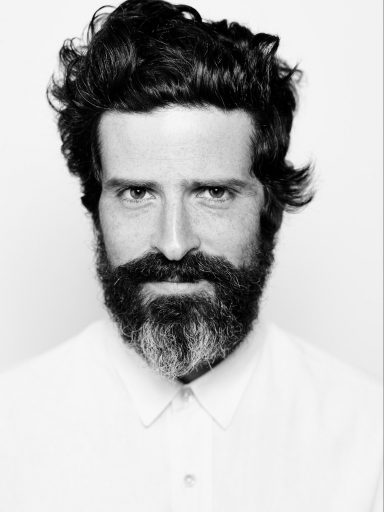 Devendra Banhart released his new album, Ma, September 13, 2019 on Nonesuch Records. This is Banhart’s first album since 2016’s Ape in Pink Marble. Ma, bursting with tender, autobiographical vignettes, displays a shift from the sonic experimentation of his previous albums to an intricate, captivating story-telling and emotional intimacy. Banhart favors organic sounds to accompany his voice and guitar, the arrangements bolstered by strings, woodwinds, brass, and keyboards. He also debuts a fantastical, surrealistic video for the first single, “Kantori Ongaku.” Ma is available to pre-order here. Nonesuch Store pre-orders include an exclusive, limited-edition print, created and signed by Banhart.

“Kantori Ongaku” translates from Japanese to “country music” and is a nod to experimental pop legend Haruomi Hosono, a founding member of the influential electronic band Yellow Magic Orchestra. The song’s video features a full circle journey of vignettes that play on the dream-like quality of intimate activities. The video, colorfully directed by Giraffe Studios, also features guest cameos anda brief infomercial requesting donations to the I Love Venezuela Foundation.

Blacktop Mojo at the Skyway – TICKETS 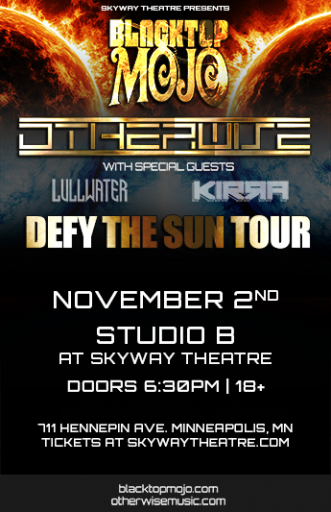 A hard-driving Southern rock unit based out of Palestine, Texas, Blacktop Mojo’s fiery blend of post-grunge, classic rock, and metal falls somewhere between Soundgarden, Black Stone Cherry, and Lynyrd Skynyrd. Founded in 2012 by frontman Matt James and drummer Nathan Gillis, the band eventually morphed into a five-piece with the additions of bass player Matt Curtis and guitarists Ryan Kiefer and Kenneth Irwin. They released their debut album, I Am, in 2014, followed by a heavy bout of touring that saw the group sharing the stage with a wide array of heavy hitters, including Bon Jovi, Sammy Hagar, Candlebox, Darryl “DMC” McDaniels, Black Stone Cherry, Shaman’s Harvest, Pop Evil, Puddle of Mudd, and Drowning Pool.

In 2017, the band teamed up with Muscle Shoals producer Jimmy Johnson for their highly anticipated sophomore outing Burn the Ships. The album was released via the band’s label, Cuhmon Records, in March of that year to critical acclaim, and it’s first single, “Where The Wind Blows” reached #27 on the Billboard Mainstream Rock chart, while the band was on its first U.S. tour that fall. Through that tour, they landed a slot on 2018’s Rock Fest, featuring headliners, Disturbed, Incubus, and Godsmack, among many other industry leading hard rock acts.

At the beginning of 2018, the band has started work on its third full length release, as well as touring to support the second radio single from, “Burn The Ships”

Janiva Magness at the Dakota – TICKETS 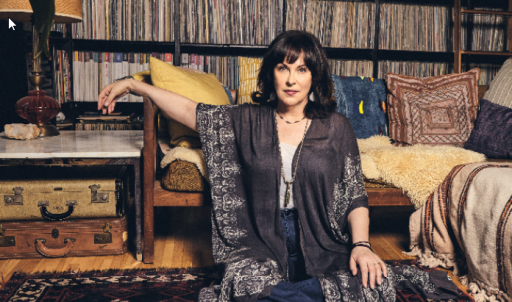 “One of the most fiery and original vocalists in contemporary blues and soul…Thoughtful, inventive and almost unerringly on the money.” – MOJO

On the heels of both her 15th album release, and highly anticipated memoir, Janiva Magness shows no signs of slowing down. With her new album, Change in the Weather: Janiva Magness Sings John Fogerty (9/13/19), reframing 12 songs curated from the Creedence Clearwater Revival leader’s catalog, the Grammy-nominated artist is at the nexus of re-invention and tradition.

Audience members can anticipate hearing Magness’ top notch touring band performances of songs from the newest John Fogerty-related release as well as tunes covering the span of her 40 plus year recording career.