Cold War Kids return to First Avenue’s Mainroom on January 24th for a Friday night show. This frequent Mainroom performer is touring in support of their new album New Age Norms 1, which is the first of a three-album trilogy. Opening the show will be Overcoats. Doors open at 8pm for the 9pm 18+ show. Tickets are available HERE.

Over their career, Cold War Kids have fielded music’s seismic shifts while simultaneously sticking to their own game plan. Over the course of a dozen releases – including seven studio albums, multiple EPs, and 2017’s live collection, AUDIENCE – on majors and indies alike, non-stop tours and the festival circuit’s biggest stages, massive radio and streaming successes as well as a few lineup changes of their own, Nathan Willett and his band have become a major part of the modern landscape.

Coming off of the high water marks of 2014’s HOLD MY HOME – with its smash single, “First” – and 2017’s acclaimed LA DIVINE, Willett began to hone in on what was most exciting and integral to him in both the Cold War Kids recipe as well as in the current music climate. While on tour in the summer of 2018, he and the band obsessed over the seemingly never-ending stream of Kanye West-produced records being released (particularly gravitating to those by Pusha T, Teyana Taylor, and Kid Cudi), enamored of their breezy compactness and fresh feeling. Willett became excited to explore a working relationship with his longtime producer of favor, Lars Stalfors. Upon Willett’s return to Los Angeles, the pair entered the studio to write a very specific type of album.

“The idea that those Kanye records were coming out every month felt so cool, very of the moment,” Willett says. “Eight songs, a very digestible amount of music that just keeps coming. And it really sunk in how fun it was to experience those in real time with all of us together. I wanted to do that with Lars-to make a record with just a writer and a producer. So it began a whole new chapter, what I would call Cold War Kids 2.0. I think the approach, sonically, was in taking apart the idea of what the band is and just trying to take the doors off a bit to see where it can go.”

“Complainer,” the first song written for NEW AGE NORMS, is a call to transcend and do something constructive rather than dwell on all the things that might drag us down, its message inspired Willett throughout the recording process. “4th of July,” with Willett’s falsetto delivering a laid-back but withering chorus as the beat pops smoothly around him, is a song about the mixed feelings Americans can encounter on patriotic holidays spent in celebration but without a context of appreciation.

“For me, the songs are always the most important piece of Cold War Kids,” Willett says. “And in them, having a strong message and maintaining a positive energy and output-and not just rage and conflict-is so important, and what can set us apart. But at the same time, we’re doing an old thing: rock ‘n’ roll! I don’t want to completely intellectualize it, because we don’t have this liberal, politically correct agenda.

We set out to make a rock and roll record. But, the person that I am, the band that we are, the values that we have are in these songs. They’re not tropes of rock and roll urges; they’re in pursuit of a new value, a better world. And it’s not so clear cut what those are, but these are the new age norms.” NEW AGE NORMS 1 was released on November 7, 2019 and marks the first volume of a remarkable three-album trilogy from Cold War Kids.

In other recent news, Cold War Kids have made history as “First,” the band’s RIAA gold certified 2015 single, has been named by BDS (Broadcast Data Systems) for earning the most spins at Alternative radio outlets nationwide this decade. The track tops BDS’ “Alternative Top-500 Airplay For Decade (January 1, 2010-December 31, 2019)” with 214,342 spins in less than five years, besting blockbuster hits by AWOLNATION, Arctic Monkeys, Portugal. The Man, and Milky Chance, among others. “First” follows the previous decade’s most played Alternative track, The White Stripes’ “Seven Nation Army.”

Overcoats fight by bucking trends, overturning expectations, and cranking out sticky sweet pop subversion tightened up to Swedish standards under a Seattle grunge haze—all born out of a D.I.Y. Brooklyn “laboratory.” Since forming in a Wesleyan dorm room during 2015, Hana Elion and JJ Mitchell quietly molded provocative pop into power.

Their full-length debut Young stood out as “one of the Top 5 bestselling albums from a debut artist on an independent label in 2017,” bowed at #4 on the Alternative New Albums Chart, and landed at #12 on the Heatseekers Chart. Not to mention, they generated 50 million-plus streams, sold 30K albums, and regularly averaged 1 million-plus listeners on Spotify. Billboard touted Young among “The Best Albums of 2017 – Critics Pick,”and NPR Music named it the “#4 Album of 2017” in addition to praise from New York Times, NPR, Entertainment Weekly, and more. Additionally, they toured alongside Mitski, Tennis, Rhye, Matt Corby, and Joseph. 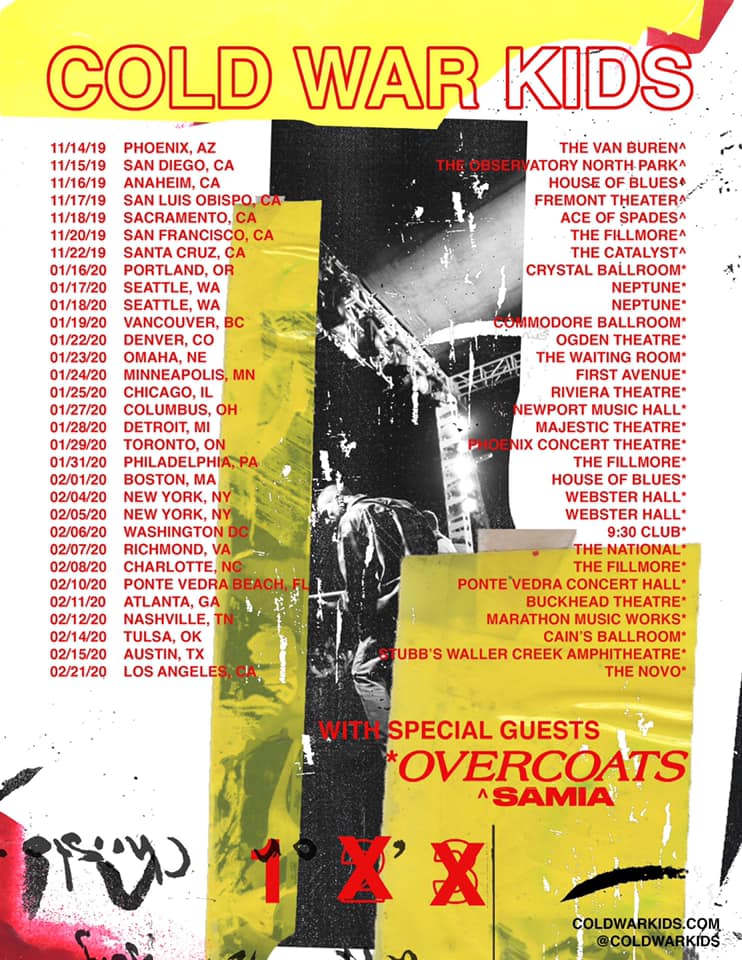 The Portland-based band The Dandy Warhols, entered the stage on a cold Saturday evening welcomed by the fans’ screams and cheers. The near capacity crowd at Fine Line Music Cafe was prepped, fully hydrated, and […]

It was nearly two hours before show time and there was already a line in front of The Varsity Theater for Tuesday night’s show. My friend and I cracked a couple of jokes as we […]