The music world is concerned about the future of rock and roll. The youth of today often seem uninterested in this genre and instead are engaged by hip-hop, rap, or random songs they find by Lil’ somebody-or-other. Twenty-one-year-old best friends and bandmates, Luke Gruntz and Ian Fraser, are so concerned that they have tried to avoid being labeled a rock band, despite the awesome rock music they write and perform. They admit to being huge hip-hop fans themselves and have proclaimed that hip-hop artists may be some of the only current artists that aren’t afraid to share their feelings in their own words. Rock and roll was the music known for this in the 70’s. The boys fear it is now so over-produced that even a song that starts with deep meaning gets reshaped into the factory mold. Or lyrics are just about the same old stereotypical rock star lifestyle. That type of rock music is not what the pair are interested in. Neither are kids these days. They see this type of rock as “old people music” or “boring.” Even when they like rock they are ashamed to admit it to friends. You can see why cleopatrick doesn’t want the rock anchor fastened to them. But give them credit for forging ahead with making honest, transparent, rock music and challenging the youth of today to “f___ (or substitute “forget”) what you think rock is. It’s different now.” They are asking young listeners to be open-minded and check them out.

Although I’m equal parts hockey and music fan, tonight, I had no problem giving up my Wild season tickets to attend the cleopatrick show. Downtown St. Paul was abuzz this Saturday night with the Wild playing at the Xcel Energy Center and a public party kicking off the outdoor skating season in Rice Park. Fireworks from the Winter Skate party were cracking in the sky as we entered. I was curious how many young fans, if any, would be at the all-ages show. Shortly after entering the Amsterdam I had the good fortune to run into two young rock fans from South Minneapolis. Eli (11) and James (10) told me they make up their own two-piece band like cleopatrick, with Eli on guitar and James drumming. More on these two later. I promise. But first on to the show.

Northern National, an alt-rock band from Dallas, Texas, kicked off the night telling the late-arriving crowd that there was plenty of room up front. Move up closer! The four-piece band’s sound is on the pop side of the alt-rock scale with the smooth vocals of Rossi and plenty of keyboard/synthesizer by Kanne. Dylan’s bass gives the band a heavier sound live than what you may hear on recordings. Anthony was using much of Ian Fraser’s cleopatrick-emblazed drum set but didn’t look worried about breaking a head. Rossi did a great job of engaging the fans, teaching them the chorus of a few songs so they could join in at the right time. He also jumped down on the floor and had the crowd gather tight around him. Like all opening acts, their set came to an end too quickly, but not before Luke and Ian from cleopatrick snuck into the crowd to watch a bit. No one seemed to recognize the unassuming stars as they look like they blended in with other fans and were event clapping along and taking some video. 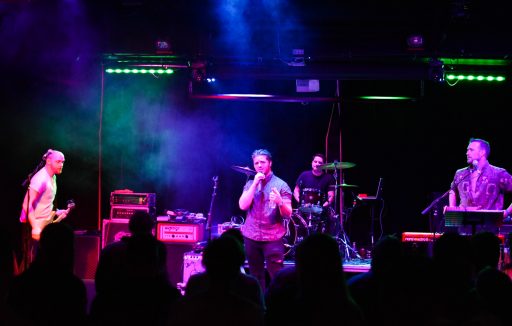 Next up was Minneapolis’ own The Push which was a pleasant surprise as Live Nation had only indicated Northern National was supporting. The music of The Push was right up my alley, a grunge-y, alt rock sound that coordinated well with singer-guitarist Anthony Jones’ torn jeans and long flowing hair. He even joked as he started a song that he would play it with hair down his throat. Anthony asked the crowd, “How many of you have seen us before?” Only a handful raised their hand, so I didn’t feel too bad about being in the dark about these promising local rockers. After asking the crowd to make some noise for the other two bands playing tonight, the local musician said, “They both drove a long way to get here. Please buys some of their stuff after the show so they have gas money!” Spoken like a true starving artist. Talking with Anthony after the show, he has played together with drummer Mark for years and they added a rotating bass player to perform as a trio. Their new album, Oh, Victory, has been recorded and will be released , but you can already find their songs on Spotify.

A more dense crowd filled the room as Ian and Luke worked on getting the stage re-set and their gear ready for cleopatrick’s set. While the duo has been termed “the boys,” tonight that title is reserved for our young fans, Eli and James, attending their first rock concert. The boys turned to smile at each other as they could hardly believe they were standing in the front row, immediately in front of Luke as he started in on guitar and added his emotional vocals. The band’s sound is most closely compared to Highly Suspect, Royal Blood, and Catfish and the Bottlemen. But they have crafted their own heavy, ringing sound and write raw, honest lyrics that dig deep into their feelings. Being best friends for nearly twenty years now, and having played so many shows together, they can communicate by just looking at each other. Ian may not be the frontman, but his thundering, rhythmic drumming is key to the sound. It’s really quite amazing how much music just two guys can crank out. Luke has figured out how to send both bass and guitar parts from his Les Paul through his board and tweaks it between songs. Young Eli told me he wanted to ask Luke what kind of set-up he uses to do this. Just your typical question from an 11- year-old, right?

I didn’t recognize the first song “Sanjake” but when the band kicked into “Daphne Did It” for the second song the crowd recognized that one right away. Next,”Hometown” proved it was the most well-known song with the majority of the crowd singing along with Luke. He described it as being about their hometown of Cobourg, Ontario. In case you haven’t yet heard, the two have been best friends since age four when they met at St. Michael’s pre-kindergarten. They started playing music together with matching acoustic guitars when they were about eight. cleopatrick was formed when they graduated high school. Now the boys (oops), young men, are 21 and two of the most friendly and polite gentlemen I’ve met. I’m sure they have their fun, as any 21-year-old should, but in this setting they are welcoming, caring, and appreciative young stars. Great role models. Their parents should be proud of them for that, over and above the rest of their success.

During “City Kids” Luke has been known to crowd surf while continuing to play his guitar during the end of the song and did not disappoint the St. Paul fans and launched himself on top of the supporting fans.  I’ve witnessed plenty of crowd surfing, but not by a guitar player continuing to play a song without missing a bar.  After the mass passed Luke back to the stage he tested the extent of Minnesota nice when he slipped up and told the crowd, “It’s great to be in Minneapolis.” Someone corrected him, “Not Minneapolis. St. Paul!” “That’s not a big deal in the Twin Cities, is it?” Luke asked, realizing it kind of was. “Take it easy on us for that mistake and we’ll slip in an extra number.” Deal.

After “Bernard Trigger” the band kicked into “Chromeo” which is an oldie (not really) but a goody (my favorite). Just has that catchy hook. “The Depths” with its psychedelic sound also was a crowd pleaser. When pausing after its completion, Luke explained there would be no stereotypical “leave the stage, wait, and come back for an encore.” Instead they would just continue right into the extra songs as they had to leave quickly tonight. Since the two are Canadian citizens, they had to obtain work visas for their US tour. “Our visas expire at midnight tomorrow night,” he explained. “So we need to leave right after the show to make sure to get back into Canada. I’d miss my mom too much if I got detained here.” I wouldn’t believe that from most rock stars, but I believe these guys.  They are taking a brief tour break before resuming their Youth Tour: Part Two in Brooklyn, NY on November 29th.  With new visas of course.

Launching into “Youth” as their second-to-last tune, the party continued as many sang along to the verses about regret and wasting youth. The crowd was even bouncing to the rowdy ending of the song. As Luke took a breather to re-tune and adjust his board he said, “We are going to dedicate the final song tonight to someone special in the crowd. Eleven-year-old guitarist Eli and his drummer friend, James.” You see Eli had earlier sent the band a video of the two youngsters playing “Belly Button Blues.” It hit home as Luke genuinely said, “We were so impressed!  Really the coolest thing we’ve seen.” He quietly told the boys to stick around after the show to talk. The band finished their ten-song, hour-long set in grand fashion with the exploring guitar of Luke and the forceful drumming of Ian proving this was a great closing song for more than one reason.

While most fans exited, the night was not over for our featured guests. There were Eli and James up on stage with Luke showing them his soundboard and providing other advice to the “mini- cleo” duo. Ian joined Luke in posing for photos with the boys and Northern National and The Push also adorned the celebrated youth with parting gifts. I myself had a great day, seeing an awesome rock show, but more importantly witnessing how respectful, welcoming, and appreciative cleopatrick and the other bands were. Now if you think I had a great day, how about Eli and James? It will be tough to top their BEST DAY EVER!  I feel much better about the future of rock and roll if it’s in the hands of fellows like Luke and Ian, and Eli and James.

I posted the full set list for cleopatrick HERE

With their sleek yet gritty brand of alt-bluesy garage rock, Toronto-based five-piece July Talk create rock & roll that’s both boldly intimate and wildly confrontational. Each track in the band’s repertoire is a conversation in […]

The last time I had the opportunity to see Ed Sheeran was in 2013 during his first U.S headlining tour, and I was immediately impressed with his ability to capture an audience with nothing more […]