It was a weekend chalked full of great music at the Basilica Block Party – from local up-and-comers to massive national acts and everyone in between. One of those artists “in between” is 19-year-old Julia Brennan. There is something different about Brennan from other artists I’ve talked to. She’s not brand new to the world of music but she’s not (yet) a national touring artist. She’s confident and self-aware in a way many “up and comers” aren’t. Yet at the same time, she’s personable, down-to-earth, bubbly in a way that many of the huge headlining artists aren’t. In many ways, she’s a walking dichotomy. She’s young, but mature (and seemingly wise) beyond her years. She speaks with beaming possibility in her voice of what may be ahead for her career, but is tethered with a realness and  levelheadnesses. She’s signed to Colubmia Records but still living with her family in Plymouth, Minnesota. I caught up with Brennan to learn more about her journey to the headlining Basilica Block Party stage and what’s ahead for this singer/songwriter on the rise.

I met up with Brennan backstage at the Basilica Block Party a few hours after her set. Greeted at the security gate by her manager, we were walked about a block away from the main stage, to the catering area. Tucked away behind the industrial park, we were greeted by Brennan. She emerged from the Catering Tent where she was hanging with family and friends with a thousand-watt smile. As the golden hour fell on the Twin Cities, that was honestly the first thing I noticed about Brennan, her bright beaming smile, dressed head to toe in white, beaming with a freshness to her presence. Our photographer snapped a few portraits against a near by catering truck. I watched Brennan as she laughed and joked with our photographer, with her entourage watching closing nearby. “Give her a flower, she needs some color!” a woman (I’m guessing mom, but not 100% sure) said jokingly. Brennan took the sunflower and leaned against the truck for more photos. She seemed no stranger to the camera, confident in how to stand, how to smile, responsive to the photographers direction. But at the same time – she seemed to be genuinely having fun. There is doe-eyed excitement, tempered by a realness and maturity to Brennan’s presence – something tangible even in the first few moments on meeting Brennan. 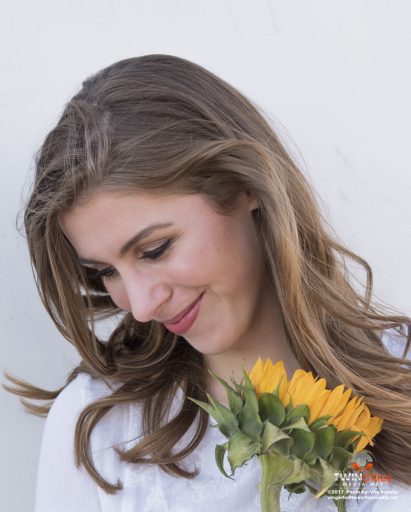 After a few photos, Brennan and I sat down in the corner of the tent. The ease and poise Brennan carried herself with, I felt like I was sitting down with any one of my girl friends. She was comfortable, easy to talk to – not jittery with nerves, but not aloof, rather focused. We chatted back and forth, I asked her how she thought her set went. “I think it well…but I was super nervous about it because I had no expectations about it, but it went so much better than I could have imagined,” her face lit up as she spoke. “And now, it’s like, I don’t want to play by myself anymore,” she went on, smiling as I could see her reliving that performance in her head. During our conversation I learned that Brennan, though a Minnesota native, had never been to Basilica Block Party before. Yet, here she is, first time at the Basilica, playing the main stage to hundreds of people.

As we moved past pleasantries and how the set went and small talk, I was so curious to learn more about Brennan and her story. How did a college-kid from a suburb of the Twin Cities end up playing the Basilica Block Party? Where did Brennan get this voice that snagged the attention of Columbia Records? “I was put in a really musical school. I mean, I sang forever. I started piano at like 4 or 5. And then my mom was a singer – she was a wedding singer. Her mom was a singer in a quartet. And then my dad’s mom was Miss Minnesota 1951. And her talent was singing and playing the piano. She’s why I played piano. She sang with Bob Hope and sang with all these crazy huge people. So I kind of have musical inspirations on both sides.” Brennan’s connection to music and particularly music in Minnesota run deep. “The older I got, the more I wanted to see ok what twist can I put on this,” Brennan said. It’s clear from her piano-driven pop/ballads she’s doing just that.

We dove more into her musical inspirations, which once again showed these unique dichotomies that exist within Brennan as a person and as a artist, “I LOVE Adele. I love John Legend. I love Sam Smith. I love ballads. I love that like that raw, emotion in music. But then at the same time I love Justin Bieber and just pop, you know?” Talking to Brennan, her music starts to make more sense to me. This young but wise, youthful yet mature, fun yet serious, bubbly yet well spoken and astute tension made more sense. Her old-soul from her grandmothers and mother, her girlish charm from being just 19 and part of Bieber-mania. There was a depth as Brennan spoke, a maturity that was in one word – captivating.

Someone else Brennan has captivated is Columbia Records. It wasn’t overnight magic for Brennan and her Columbia deal however. “Originally, I had gone down, my mom helped me, and my mom and I went down to Nashville. We recorded three songs – Inner Demons being one of them. And we kind of just started doing it on our own. We set up social media accounts, started doing photos, cover photos. And then 9-months went by, and I broke my collarbone. And they were like don’t do anything, don’t do anything – so I was like I’ll just be online all day, everyday with music.” After putting her music on iTunes and YouTube and trying to promote herself, something interesting happened. “So then I kind of went on a limb and sent it to KDWB because they have that Make My Monday segment. And most people ask for concert tickets or whatever but I sent them an email and was like, hey I’m a local singer/songwriter will you Make My Monday and play my song?” Brennan went on to say that she never thought she would hear from them, and tried to forget she even did it. “And then, like two days later I got a text message that they wanted to Make My Monday and so then they called me at 8:00 am on Monday, right in the middle of the segment, I had no idea I was gonna be on air, and they played my song.” As Brennan retold this story, one I am sure she has told plenty of times now, she just beamed, as if experiencing it for the first time. That surrealness of hearing her song on the biggest radio station in the Twin Cities, “We had all the radios on in the house,” Brennan laughed. Within days of playing her songs so had calls from a handful of record labels before eventually signing to Columbia Records. 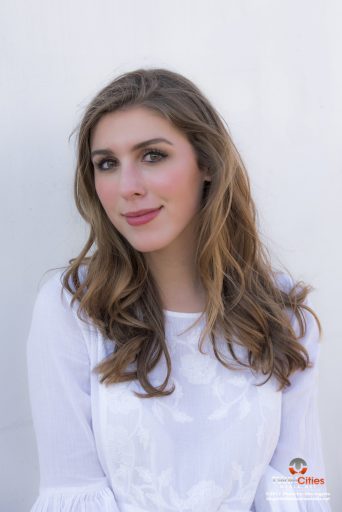 We went onto speak about what that time after signing with Columbia was like. “It’s weird, I like to say that everything has changed but at the same time nothing has changed,” Brennan so astutely put it. She ended up taking a year off of school to focus on her commitments with Columbia. “My parents are actually the ones who encouraged me to take time off. School will be there,” she said confidently. She is still living with her family here in the Twin Cities. “It all happened so fast. But then I would go away and do all these recording trips, and photo shoots and meet all these exciting people and do all these exciting things, and then I’d come home and play with my dog, and go with my sister and have fun. And my friends are here. And it’s like nothing has changed. There at Basilica today and they want me to come hang out with them after this actually,” Brennan went on.

With a record deal under her belt, a slot on the Basilica Block Party, one million streams on Inner Demons, Brennan has quite the resume for a singer/songwriter of just 19. I asked Brennan what he has in the works for the rest of the year. She spoke adamantly about hoping to have her debut record out by the end of the year and getting some more shows on the books here in the Cities and beyond. After spending sometime with Brennan, away from the noise and energy of Basilica, I have no doubt we will be seeing plenty more from her in the coming months. Her zest for this opportunity that is in front of her is refreshing to say the least. The zeal she speaks with about her music, her family and friends, and her deal with Columbia give a glimpse into Brennan, beyond just her outer beauty and poise. Still waters run deep they say. There’s a quiet confidence about Brennan. A focus and steady drive in her pursuit of music and what can often be a competitive and challenging industry. But at the same time,  a fun loving energy you can’t help but soak in, it’s contagious and we can only hope will continue to take her far.

Check out our photos from her live set at Basilica and be sure to give her a like on Facebook to stay up to date on what we can only expect to be a big few months from the lovely and complex Julia Brennan.

Track By Track with Colin Campbell & The Shackletons

TCM’s Jessica Bolt sat down with Colin Campbell from Colin Campbell & The Shackletons at the TCM Studio for the latest installment of Track By Track. The bands newest EP release, The Horizon Lines, is […]

After the excitement of Monday night’s Peelander-Z show, I was ready for something a bit more calm and something that would get me in bed at a reasonable hour. I walked into The Varsity Theater […]

Destroyer Pulled Me In At The Turf Club Last Night

Talk about night and day, I left an all ages K-Pop show at the Palace filled with teenagers that screamed for each song of the house music, drove a couple of miles to 21+ show […]