What stage of life were you in during the early 90’s? Still in high school or college? Or maybe you were already in the working world in 1993 when Seattle rockers Candlebox burst onto the scene as one of the first bands tabbed as “post-grunge”. Were you one of the millions of fans who bought their 4x platinum self-titled debut album 26 years ago? If so, it would explain the gathering of excited 40 and 50 year olds crammed into the Cabooze on Saturday night for the sold out Candlebox show. We were sure lucky to have Candlebox throw together their little four-night, mini-Midwest tour and bring it to Minneapolis? Plus, we were fortunate to be one of the select cities in which the band performed their debut album in its entirety as they continue to celebrate its 25th anniversary.

This upstart grunge trio comprised of frontman Paul Wandtke, drummer Rob Lerner, and bassist Sean McCole were the perfect opening act for this music crowd. I didn’t make it in time to catch their set but everyone I talked to at the show said they were impressive, with Wandtke mirroring Kurt Cobain and even doing an in impressive Nirvana cover. I have heard their song “Fade to Light” and like it. But I loved their concert tees with the slogan “Make America Grunge Again”. Now that’s a campaign I would back. Plus their “World Tour” t-shirt listed just these four stops in four nights opening for Candlebox in such worldly destinations such as Milwaukee, WI, West Dundee, IL, Clear Lake, IA, and then of course Minneapolis, MN. Clever stuff guys. 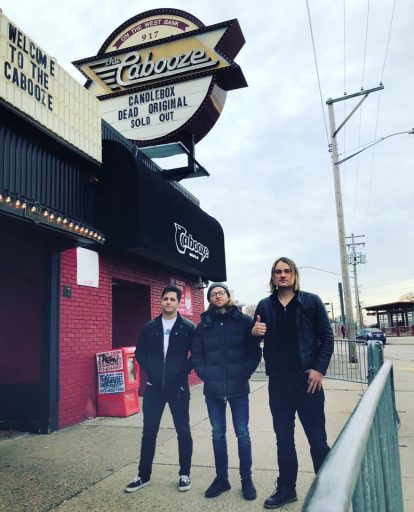 If you haven’t been to the Cabooze, you may not be familiar with its horizontal layout with the stage at one of the long edges. Tonight it was as packed as I’ve seen the place and with a heavy-drinking crowd it made for challenging beer and bathroom runs through the tightly congested bar. Candlebox took the stage to a big roar and started with one of my favorites, the energetic guitar-heavy song, “Arrow”. From this I deduced that although they would be playing Candlebox in its entirety, they would not be in order. After this first song, Martin surprisingly said, “I don’t know how it sounds out there, but it sounds like shit up here.” It turns out there was a problem with the singer’s monitor. While that was getting fixed, the revved up frontman asked, “Do you guys want to go to jail tonight? If this shit’s sold out, let’s go to jail. We are going to play you that first f…ing record then sprinkle in some other shit from the records you didn’t know that we recorded.” What they would do is start with five from the first album, shift to a middle group of newer songs, then conclude with the remaining six from Candlebox.

They quickly got to one of their top hits, “You”, which got the excited fans singing along and shouting the “f… you” part. Based on these first few songs, we would quickly learn this was no sentimental tour of musicians going through the motions. Candlebox is on top of their game and Martin’s distinctive voice sounds just like it did back in 1993. While Martin is the only original member remaining, the current lineup of guitarists Brian Quinn and Mike Leslie, bassist Adam Kury, and drummer Dave Krusen have been together since recording their last album in 2016.

As Martin put on an acoustic guitar for the next song, he asked the folks in the balcony at the far end of the bar how they were doing, and joked, “Those are the worst seats in the place.” He asked how many God-fearing folks were here and after not getting much of a response, joked we must be a bunch of Pagans. “I firmly believe I will see you in hell in about 20 years. I wrote this song when I was 18, about organized religion. I was raised Roman Catholic and think it’s an awful place. “Cover Me” is about those who like to sin.”

“This bar is crazy,” Martin said. “It feels like we should be in a Gun ‘n’ Roses tribute band or something,” he said, as Quinn pulled a quick riff out of thin air. Finishing this first group of debut album songs with two more popular hits, “Don’t You” and “Blossom”, Martin dedicated the first to all of the scientologists in the house, after explaining his ex-wife was one. It would come in handy in teleporting to the bathroom tonight.

“This is the point in the show when we play other songs from our career that you don’t know, “Martin explained. They played basically one from each of their other albums. First, “Simple Lessons” from 1995’s Lucy. Leading into the furious tune, Martin said, “If you want to break some stuff, now is the time. Remember, we are going to jail.” “Sometimes” was a lighter song from 1998’s Happy Pills, and “Stand” from 2008’s Into the Sun was another wild one that earned a huge roar from the crowd after Martin ended it in screaming fashion. The singer accepted a beverage from a fan and joked, “I like this White Claw, but my husband doesn’t know.”

“She Come Over Me” from 2012’s Love Stories & Other Musings was dedicated to all of the ladies. It has a recent-Soul Asylum sound to it. I love all of their strong 2016 album Disappearing In Airports.  “Vexatious” from the album is a faster paced song and features a great guitar solo by Quinn. Their new music is not grunge, but straight ahead rock and the new song that Martin said will be on their new album in 2020, was called “Nothing Left To Lose”.  Martin dedicated it to Lemmy, which should give you a hint as to the direction their music is heading. Martin said, “For those of you who care, our new album comes out in February. And for those of you who don’t care…….. our new album comes out in February.”

“Back to 1993?” Martin asked as they returned to the remaining half-dozen songs from Candlebox. They resumed first with “Mothers Dream”, which he dedicated to his grandma which sounded sweet until he added, “She was a rotten bitch. Really, she was.” And then told us the next song was for those of us who like to get high on mushrooms, saying he wrote “Change” while high on shrooms. And “No Sense” was for those who like marijuana (sensing a theme here) and told us we need to work on getting it legalized in Minnesota so they can buy some weed next time they are here. Following “He Calls Home” Martin complimented the opening band, Dead Originals from Chicago, and asked us to help them out by buying a shirt or CD as they need enough gas money to get home. Getting a bit serious, Martin asked us to remember all of the great musicians and friends we’ve lost in recent years before playing Candlebox’s most successful single, “Far Behind”. This had most of the audience scrambling to record it on their phones while probably just recording themselves singing along. Martin let the crowd finish the well-known song on their own.

Martin at first joked that their final song was dedicated to the strippers in the house. “You know who you are!” Then he got more serious. “Rain” was the last song but it started with a little “Purple Rain” tribute to Prince, with Martin asking, “Why the f… did Prince have to die. You could take anyone from the country world, but Prince? This goes out to you buddy.” You could almost picture the Minnesota icon up there on stage with the band, playing along to the jazzy guitar parts of the song. After both guitarists were featured on solos, Martin halted Kury’s attempt at a bass solo saying, “One solo was ok, two was pushing it, but three?” Like all shows, it would have to come to an end. But this was just the fix Candlebox fans like myself needed. It was a special night in Minneapolis. Thank you Candlebox!

Article by: Colton Davis Photos by: Markus Akre This is the second time the British pop/punk duo has come to Minneapolis and they weren’t taking any prisoners. The Ting Tings started out their set in familiar territory, […]

I love the snow. I truly do. What I don’t love is the way it affects shows and attendance at said shows. I was bummed that out of all of the days Mother Nature could […]