Matisyahu will be making an appearance at First Avenue on Tuesday, December 5th and you will not want to miss it. Although he has dropped the Chassidic look that seemed to turn a lot of heads, Matisyahu has continued to produce some of the most interesting music out there right now. Blending elements of reggae, hip-hop, beat-boxing, rock and oh so many more styles, Matisyahu’s music is explosive when it needs to be and calming when it should be. This uniqueness and attention to detail has kept his name in lights since he first came out. Sure, he lost the strict Jewish stylings that he became known for but, staying prevalent without that look just proves that there is so much more to this man than that look and his music speakers louder than anything else he could do.

Matisyahu has been on journey inward for more than a decade. The journey has been private and public. The journey has at times been explicitly external, even while being driven by internal change. Now nearly thirteen years after the release of his first studio record, Matisyahu and his band have done something unmatched in his past repertoire; they have crafted that journey into a musically thematic eight song movement. 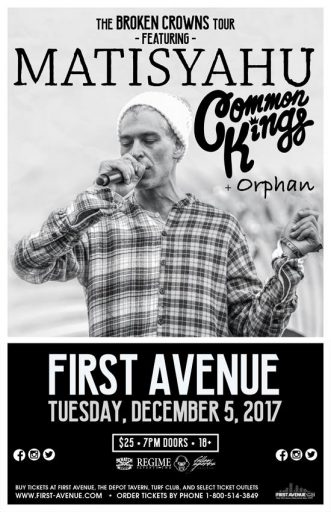 The band features longtime guitarist Aaron Dugan, Dub Trio bassist and drummer Stu Brooks and Joe Tomino, and keyboard virtuoso BigYuki — and the journey starts with them. The band improvised for hours in the studio with Matisyahu watching on as an admirer without singing a single lyric. Out of the improvisations grew melodic themes, rhythmic peaks and valleys, blissful and proto-song guitar passages, deep dub meditations and ultimately an inspired instrumental record until itself. Only once the band had crafted this musical narrative, did Matisyahu begin to work on a lyrical narrative of his own — a lyrical narrative that is simultaneously informed and integrated with the music yet driven by Matisyahu’s own personal journey. The result is Undercurrent, Matisyahu’s sixth studio album.

Opening the show will be Common Kings. Common Kings’ music is an array of head-rocking beats, relatable lyrics and feel- good vibes. Each of the band members’ personality spills over into Common Kings sound, producing phenomenal pop hits infused with the boys’ love of their Polynesian roots; rock, reggae, and R&B influences; and a live show that is as soothing as it is exhilarating. The band, comprised of Bass Player Lui Kirimaua (Ivan), Lead Singer Sasualei Maliga (Junyer), Drummer Jerome Taito (Rome), and Lead Guitar Player Taumata Grey (Mata), forged a bond during a jam session at Ivan’s house and Common Kings was born. The band name: a nod to the fact that the boys are both proud representatives of their home lands of Samoa, Fiji, Tonga and Hawaii, and everyday guys from Orange County, California trying to live out their dreams.

Kicking off the night will be Orphan. “Orphan is a new band I signed currently living and making music out of my home. All three core members Menachem, Nissin, and Chaim are sons of Lubavitch Rabbis and met in Yeshiva. They formed a bond around my release at the time (Live at Stubbs 2) and began to study the sounds of Dub Trio. Of all the music I’ve come across over the years, these 22 year old boys manage to retain the spirit of their Lubavitch heritage while creating music with a fresh Brooklyn edge that is an outgrowth of the Matisyahu sound. I am proud to introduce to you, Orphan, the soundtrack to a generation who never met their rebbe and have had to blaze a new trail.” -Matisyahu