It’s hard to ignore the fast, creeping world domination Billie Eilish is undertaking. Starting her music career when she was just a mere 14 years old, Eilish has been trailblazing a new style of dark, grimy pop that has recently pushed her to the top of the charts. Her latest album, When We All Fall Asleep, Where Do We Go? debuted at number one on the Billboard 200 as well as on the UK Albums Chart, making Eilish the first artist born in the 2000s to have a number one album in the United States.

As one of 2019’s most sensational acts in the industry, the anticipation for Eilish’s show at The Armory was undeniable. Selling out within minutes of being on sale, this was one of the hottest tickets of the summer. Fans lined up at the door at 11:00am the day of the show, braving the blistering 90° heat for a chance to be close to Billie.

Opening up for Eilish was rapper Denzel Curry. Hailing from Carol City, Florida, the 24 year old rapper has been creating his own unique ripples in the scene and recently released a new album called ZUU. As the lights went down, Curry came on stage with a larger than life energy. Admitably, I wasn’t ready for the chaos that ensued. The crowd was immediately sparked, jumping up and down screaming in exuberance.

Curry delivered an incredibly powerful performance that had me on my toes the entire set. I typically am not an avid listener of rap and hip hop, but I thoroughly enjoyed Curry’s set. He is a talented artist and his music quickly captivated fans there just to see Eilish. 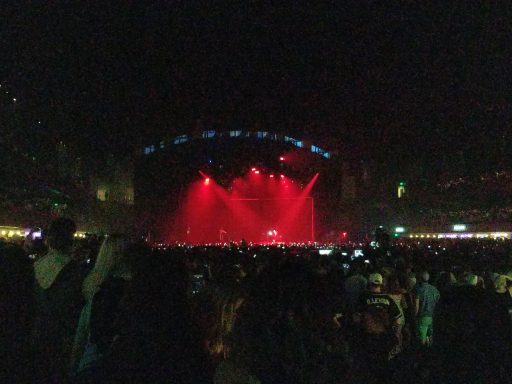 Before coming out on stage, dark animations of spiders, ghouls, and other haunts flashed on the screen. Eilish started her set with one of her post popular songs “bad guy”. As soon as the music started, the floor of The Armory started to buckle under the weight of everyone jumping up and down like electrified kangaroos. The crowd was off the hook and Eilish showed no signs of slowing down.

One of my favorite songs of the night was “you should see me in a crown”, a quick, heavy song that delivered a dark and murky punch. The rest of Eilish’s set fluctuated between hard to slower songs, but no matter what she played, she had audience in the palm of her hand.

Throughout Eilish’s show, lights and animations played behind the stage. These were just as interesting and intense as watching Eilish dance around on stage. Sometimes animations can be distracting, but they complimented Eilish’s performance. She took the crowd into her wickedly fun, nightmare of angst and macabre. 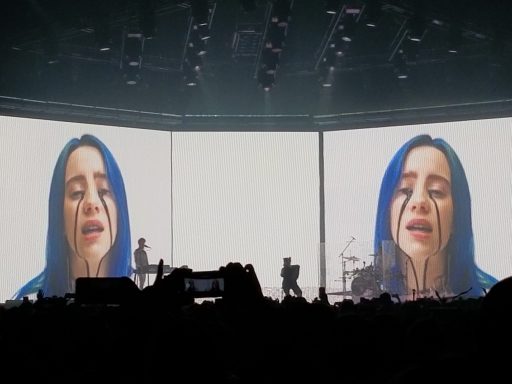 During “i love you”, Eilish introduced the band, including her brother Finneas, who was playing guitar. “As most of you already know, this is my brother Finneas. We write all our music together.” Eilish said. As she was talking, a large bed lowered from the rafters and onto the stage. Eilish explained, “We wanted to perform this exactly how we created it, which was on a bed.”

Both Eilish and her brother climbed onto the bed and began playing the song. The bed started to levitate, and rose back up to the rafters, suspending the two mid air for the whole venue to see. This was an entrancing moment, and was incredibly cool to see. After arriving back down to the stage, Eilish preformed just a handful of songs before exiting the stage to her song “bury a friend.” Before saying goodbye, Eilish paid respects to the fans that waited so long to see her. “I really appreciate you giving a f*ck about me. I know how much you do, so thank you.”

Overall, Eilish’s show at The Armory was refreshing and tremendously fun. Many ‘overnight’ pop sensations fizzle out shortly after achieving their first big break, but I believe Eilish has the stamina and the allure to stay. At just 17 years old, the future is bright. 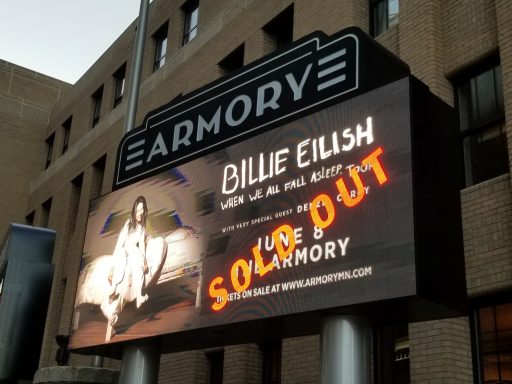 3 epic dance nights at First Avenue came to a close Sunday morning with “Let’s go Crazy” We took a ton of images and have shared them on FACEBOOK Please share, tag your friends, yourself […]

Pierce the Veil will play the Myth 9|13

Six years ago, Pierce the Veil was playing small clubs and side stages at Warped and other music festivals. With the 2012 release of their album Collide with the Sky, PTV exploded, selling out North […]

Photos by Emily Hoffmann. “It’s not every morning you get a call from First Avenue to play a sold-out mainroom,” said Yam Haus frontman Lars Pruitt. And isn’t that the truth. It was a whirlwind […]