When I cover a band live for the first time, I do a bit of research first. For Best Coast I came across a review titled “A Less-Stoned Best Coast Grows Up (and Into a Great Live Band) ”, and you know what? They are a great live band.

First Avenue was not quite sold out but it seemed close. Best Coast took to the stage to the rocky tunes of “Battery” and hit the ground running with “The only place”. I found them to be a bit more “harder and rocky” than on their records and it worked quite well. The band is touring with 3 extra members which frees singer Bethany Cosentino not only to focus more on her vocals but to ditch her guitar for some songs. Bobb Bruno’s stage presence visually was a bit outdone by Consentino’s and also kept a bit in the dark by lighting. There was no suppressing his sound though. His riffs and jams are the Best Coast signature sound and it was well represented.

Consentino wears her heart on her (social media) sleeve and connect with fans. This leads to some unique connections such as a fan giving her a customized jean jacket (Arianna) and another one sending a drink on stage (Chelsea). The audience was singing and clapping along (longest clap on tour so far according to Consentino) and she stated that tonight was pretty good for a Monday night and that she doesn’t like to leave her house on Monday. 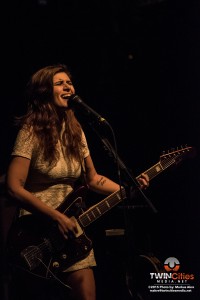 As a photographer I loved the lights. Best Coast used First Ave’s house lights to their full potential adding color and staying away from bathing the stage in a single strong light. All said, this was a great way to spend a Monday evening – thanks for leaving the house Bethany and Bobb!

Set List:
The Only Place
Heaven Sent
Fine Without You
The End
Do You Love Me Like You Used To
Crazy for You
No One Like You
So Unaware
California Nights
When I’m With You
I Don’t Know How
Dreaming My Life Away
Fade Away
Fading Fast (Had to start twice.)
In My Eyes
Feeling OK
Goodbye
Jealousy
When Will I Change
Encore:
Boyfriend

Guides by Voices play a gargantuan set at First Avenue

One of the things I like to do for our readers is to type out set lists of shows we cover. Well, I looked at the image of Guided by Voices set list that I […]

It might have been cold outside, but it was nice and warm inside a sold out 7th Street Entry last night for CAAMP and Rainbow Kitten Surprise. For two bands that are just starting to […]

It was supposed to be a quiet evening at home watching the Austrian national team at the Winter Olympic Games take it to the evil Germans. Alas life had other plans when one of our […]