Not being too familiar with the St. Paul area myself, and never having been to the Palace Theatre I had been looking forward to see Ben Harper perform there for quite some time. The area of town that the Palace Theatre is in is full of character, and I loved how it’s located in a promenade of sorts. Upon walking up I immediately noticed the long line slowly filing into the venue and was very impressed with the turnout for the show. The line moved quickly due to the employees having a great system, and the venue itself didn’t seem cramped or cluttered even with the amount of people present. I really enjoyed the set up they have going at the Palace Theatre meaning the main floor was standing room/general admission, and the balcony was full of seats for those that would rather be up there. The main floor had various tiers that gradually go down to the concert floor for handicapped individuals or those that didn’t want to be shoulder to shoulder with a stranger. I thought the sound was phenomenal as well.

Ben Harper and Charlie Musselwhite started the evening promptly at 8:30 p.m., and spoiled fans had these two talented individuals to themselves all night as the band had no opener. Kicking the night off with “You Found Another Lover (I Lost Another Friend)” the dancing and singing along had finally begun. After their opening song Harper and Musselwhite had decided that the crowd must still be warming up, so they decided to do something they hadn’t done in a long time – they brought their chairs to the very front of the stage and performed “Trust You To Dig My Grave” without any microphones. Everyone moved in close, listening intently, and making sure not to make a sound or else the voices of Harper and Musselwhite would be drowned out. At one point a few individuals in the crowd started clapping to the beat, and Harper gestured to them to refrain so the audience could full-heartedly enjoy this unique experience. This moment went into my list of top moments as I thought this really brought the crowd together and brought us all closer to these talented artists. 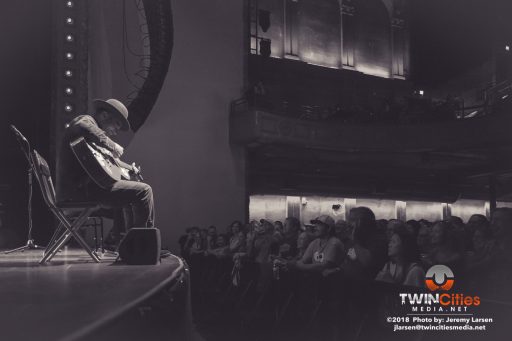 Harper soon went over to his piano where the full band joined in for “Nothing At All”, and the excitement continued to grow. Throughout the evening Harper changed guitars numerous times one of which included a slide guitar. I hadn’t heard one of these be used before, and I absolutely loved it. The sound of the slide guitar brings a unique twist to the music, and it’s likely one of my new favorites. Each musician was given the opportunity to showcase their musical talent with designated instruments, and Musselwhite went above and beyond when playing the harmonica. I can’t imagine how much practice and persistence goes into mastering an instrument such as that, but every instrument learned takes an abundance of each of these. Hats off to you, Mr. Musselwhite. Next, band members played a grouping of songs from Harper’s album, “Get Up!”, released in January of 2013. These included, “I Ride At Dawn”, “Don’t Look Twice”, and “I’m in I’m Out and I’m Gone”. Among these songs Musselwhite played his song, “The Blues Overtook Me”, from his album, “One Night In America”, released in February 2002. I enjoyed being able to see Musselwhite perform a handful of his solo songs (more to come).

Next the group played an assortment of songs from both albums, and I thought they organized the songs perfectly as the more energizing songs would perk the crowd up after a slower selection. During this time, “The Bottle Wins Again”, “Bad Habits”, “Get Up!”, “I Don’t Believe A Word You Say”, and “I’m Going Home” from Musselwhite’s album “Juke Joint Chapel” were played. Harper gladly dubbed the Palace Theatre as his new favorite Midwestern venue, and the crowd went wild as it’s always something enjoyable to hear. The crowd’s energy was definitely not lacking to say the least, which I’m sure made it a memorable and enjoyable night for the band. Harper took the time to talk to the crowd in between songs, share stories, and sprinkle about some humor which I think helped show a talented musician such as himself is really just like you and me. A moment that I will always remember is when Harper was about to play “I Don’t Believe A Word You Say” dedicating it to “the soon to be next ex-president of the United States”. The crowd enjoyed his commentary, and I think this moment surfaced another direction of unity with Harper and his fans. Harper made sure to stress that “there were good people on both sides”, which I enjoyed hearing because I think it’s something that’s often, unfortunately swept wayside.

Harper added in another twist while singing, “When Love Is Not Enough”. At this point he put down his guitar, and just did vocals. I enjoyed this moment because I was able to pay attention to his voice as the instruments weren’t as involved. After slowing it down a bit the band picked things back up with “She Got Kick”, “Found the One”, and “Movin’ On”. As the end of their set neared the band members were introduced, and the very talented Jimmy Paxson played an incredible drum solo. I honestly don’t know if I’ve heard anything like it – this was yet another one of my favorite moments throughout the evening by far. When introducing Musselwhite to the audience Harper shared a story about Jimi Hendrix’s album collection being in a museum in London, and in that collection is one of Musselwhite’s records. With hearing this information, I’m sure those in the crowd that may not have known who either of these individuals were (if there were any) suddenly knew how much talent they were actually having the opportunity to see. I always like when artists share a little more than usual about themselves even if it is just a quick fact; I think that this creates more of a respect and personability with the audience or listener. Before leaving stage, Harper also had the opportunity to share a tambourine solo with the audience which was, of course, amazing.

After listening to an abundance of energetic cheering from the crowd the band members came on for their encore a little after 10:15 p.m. Harper and Musselwhite sang their song, “No Mercy In This Land”, which was unique and enjoyable due to them alternating for the duration. Musselwhite sang “Long Legged Woman”, and the night ended with “When the Levee Breaks”. Overall, I was incredibly impressed with this show, and I’m very thankful to have had the opportunity to attend. Both Harper and Musselwhite have mastered an insane level of talent which was great to see in person. I also liked how they played a wide assortment of songs, even including some of Musselwhite’s, which surely made it difficult for fans to not check off all on their “hope to hear” lists. For those of you that didn’t get the opportunity to check out the show make sure to keep your eyes peeled for the next time these two tour or make the drive to visit them elsewhere because it’s very worth it. I, most definitely, hope to see them again.

On a hot August night in downtown Minneapolis, legendary classic rock and improvisational pianist Bruce Hornsby brought his band to Pantages Theater. Known for his solo career as well as working with just about everyone […]

The first time I saw Peelander-Z I laughed so hard that my cheeks hurt for days after. The second time I saw them I damn near pissed myself due to laughing so much. Each time […]

Black Friday Ritual at the Amsterdam Shows a Strong Presence

As most finished up their Turkey Day festivities, attention quickly shifts to big sales and bargain hunting on Black Friday. However, anyone that knows me, know that this droning run for the stores and sales […]