This past weekend, I made the trek down south to Chicago for a nutty, high intensity festival that delivered many of the most memorable concert experiences I have had in 2019. I was at some place where the beer flows like wine and the punks instinctively flock like the salmon of Capistrano. I’m not talking about a little place called Aspen, I’m talking about the place called Riot Fest.

For those who are out of the loop, Riot Fest is a 3-day music festival and carnival that takes place in Douglass Park, Chicago. There are five stages spread out across the festival, delivering non-stop music to those in attendance for almost 12 hours straight each day. There is sweat, there is beer, and there is plenty of mud. This year was my first Riot Fest experience and it was so good I wanted to give a quick recap of some of my weekend highlights.

I purchased a 3-day pass to Riot Fest and I arrived at the festival late Friday afternoon, just in time to see one of my favorite punk bands, the Descendents. Having missed the Descendents at First Avenue the night before, I was stoked to be able to see them in a festival setting. They came out and absolutely did not disappoint. For being over 40 years into their career, the Descendents still deliver one hell of a live show. They came out and got the audience rolling right off the bat, playing some of the familiar crowd favorites, including “Suburban Home”, “Everything Sux”, and “Hope”. The sound for the band was off the charts — full, fat, and crisp. Just how I like it. Plus, everyone in the band was on their game having fun on stage.

I was bummed because I had to leave the Descendents’ set 20 minutes early so I could rush over and catch Rancid. Rancid are one of the most quintessential ska-punk festival bands and the fans came out in droves to see their set. I came into their set about four songs in, and could already tell Tim Armstrong and the gang wasted no time getting people on their feet and grooving. There was plenty of crowd involvement and singing, and their set was just overall tons of fun. 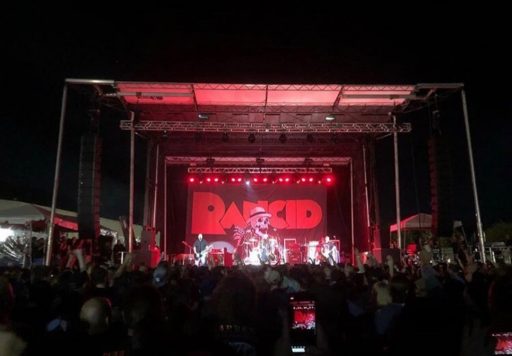 Ending the night, I made my way over to see the headliner I was most excited for — blink 182. I was especially excited because blink-182 were playing the entirety of their legendary 1999 album Enema of the State. I walked over to stage area and to no surprise found myself met with an enormous sea of people. There were people lined up from every possible angle, all the way from the front to the back, ready to see blink. When the band came out, I was feeling a lot of anticipation (ready to scream my lungs out) but was soon let down by how poor the sound quality was. The stage volume was so quiet, fans ensued a chant of “TURN IT UP” hoping the soundboard would take note and hear our pleas. This did not happen. It was unfortunate, because those of us in the back had such a hard time hearing the music. Many people left early, giving up hope that the issue would be fixed. I stayed the entire set regardless, because at the end of the day I still got to somewhat see blink-182.

Day two, I wasted no time getting to the festival right as it started. I walked around the grounds catching a few songs of Masked Intruder, The Hu, and Cleopatrick before making my way over to the Rebel stage for Drakulas. Drakulas was a band I was mostly unfamiliar with, but was nudged along by my boyfriend who was insistent we could not miss their set. We walked up to the barricade, and I was not prepared for what would come next. Drakulas took the stage wearing all black, and the lead singer sported thick black sunglasses with metal spikes. The frontman took to his synth piano at the front of the stage and started screaming “DRAKULAS!” “DRAKULAS!” “DRAKULAS!”over and over until the rest of the band joined in. Unpredictable chaos ensued. The lead singer jumped around the stage, onto the barricade, and into the crowd on top of us, screaming “DRAKULAS!” once again at multiple points in the set. I was surprised by how fun and memorable Drakulas was. Their performance was pure theatrics and all attitude. I will definitely be seeing them again if I have the chance. 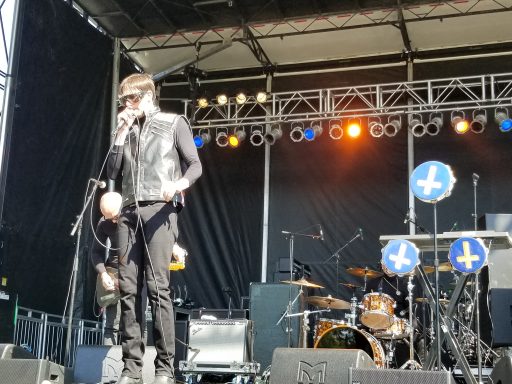 When Drakulas ended, I headed over to see GWAR, and then thrash metal band Testament before treating myself to some food and drink. It’s safe to say the food options at Riot Fest are almost as expansive as the amount of music — ranging from vegan BBQ, soba noodles, pizza and chicken, to kebabs, smoothies, and polish platters. With such an abundant selection to feel the bellies of sore, aching festival goers, I definitely ate my way around the park trying to replenish myself when I had the opportunity.

After some grub, I headed over to the Rise stage to see The Struts. Prior to Riot Fest, I had only seen The Struts once before, and was excited to catch them again. All I can say is if you haven’t seen The Struts yet, GO! They are so much fun and put on an incredible live show. Frontman Luke Spiller has charisma and stage presence reminiscent of Freddie Mercury and Mick Jagger and knows how to keep the audience on their toes. The Struts are absolutely a live band, sucking you in the entire time you are watching them do their craft. With gold stacked amps, colorful costumes, and plenty of falsetto, it’s a performance that’s hard to forget. 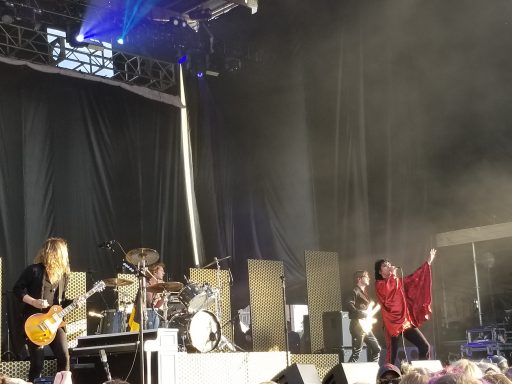 As The Struts finished up, I moved closer to the stage for Manchester Orchestra. The last time I saw Manchester Orchestra they completely blew me away and their Riot Fest performance did the same. Manchester Orchestra are an incredible live band, and their music translates in a completely different way when they are up on stage compared to their recordings. They are incredibly heavy, and LOUD. I was impressed once again by how powerful they sounded. They also dropped the news that they will be coming back to Chicago in December to play the entirety of their debut album, Mean Everything to Nothing so there may be another Chicago trip lined up for me at the end of this year. 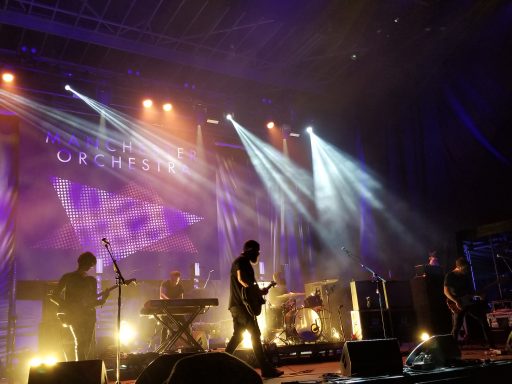 Ending the night was absolutely legendary and utterly brutal heavy metal band Slayer. Those in my pack were either mostly unfamiliar with Slayer or didn’t care to see them, but I insisted that we stay for the entire set. I knew they would not be disappointed. After all, this show was Slayer’s final Chicago/Milwaukee performance, as the band just wrapped up a farewell tour and is set to retire very soon. We made our way over to the stage and Slayer came out of the gates absolutely unhinged. They blasted through their set, with so much pyro and stage antics the entire crowd lit up. Those I was with instantly got smiles on their faces, exclaiming “This is awesome!” because yes, it absolutely was. Our enthusiasm was shared by those in the crowd, walking around periodically chanting “SLAYER!!!” as the band ripped through the night. They ended their set by playing “Raining Blood”, “Dead Skin Mask” and “Angel of Death”. My last time seeing Slayer was easily the best, and it’s safe to say I will really miss this band and the live theatrics they bring. 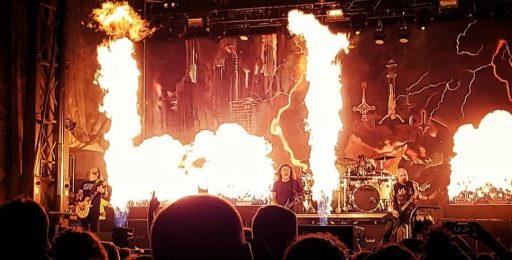 The night prior to day three brought overnight storms and rain, making the festival grounds wet and muddy. After a late breakfast, I showed up ready to see White Reaper at 1:40pm. Looking around, I quickly noticed that the pit area was swamp of mud and grass. Oh boy, we were in for it. White Reaper came out and instantly had the crowd on their feet, dancing and jumping. I jumped in the pit because I couldn’t resist how fun it looked. By the end of the show, everyone walked away with mud caked all over their shoes and all the way up their pant legs. I guess that’s the festival life. 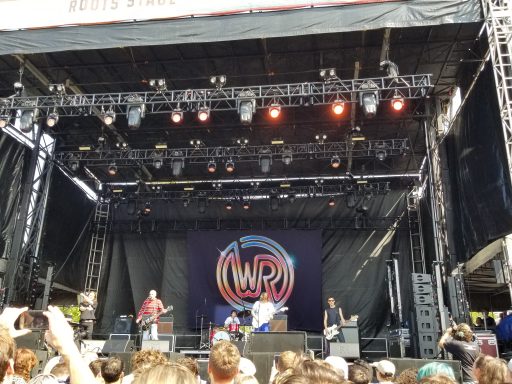 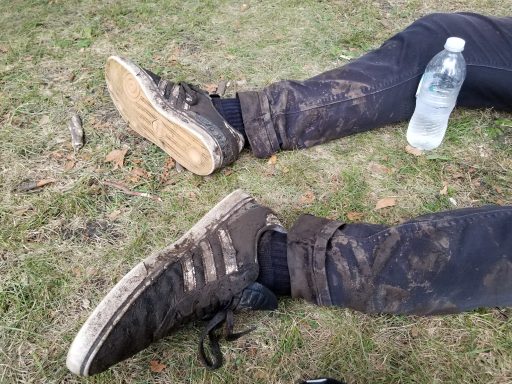 I left White Reaper and walked over to the adjacent stage to see Frank Iero and the Future Violents play the last few songs of their set. Frank Iero is the former rhythm guitarist of My Chemical Romance, which was my favorite band growing up. So of course, I had to go see him play. Walking up to the stage, it felt like seeing and old friend. My Chemical Romance disbanded in 2013, and I have not had the opportunity to see Frank Iero or any of his musical projects post-MCR. His set at Riot Fest was exceptional, bringing in elements of hardcore, punk, and alternative. I wish I had gotten to see the full set, because I really enjoyed what I was able to catch. 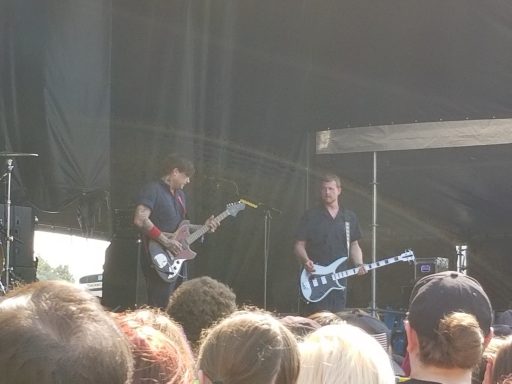 After Frank Iero, I grabbed an extra large, $10 strawberry lemonade to pump some liquid and sugar into my body and sat myself in front of the Riot Stage for a couple of hours. I watched The Beaches perform before Against Me! took the stage. I was incredibly excited for Against Me!, because they were playing two of their albums Reinventing Axl Rose and Transgender Dysphoria Blues in full. They came out and front-woman Laura Jane Grace greeted the crowd by saying “Ahhh, Riot Fest. My favorite festival.” before playing the opening notes of “Pints of Guinness Make You Strong”. The crowd went absolutely nuts, jumping, moshing, and screaming every word right back at the band. This set was incredible to watch. The sheer passion shared by the fans and the band was something special. Many people in the crowd had tears in their eyes, so happy to be witnessing such a special occasion.

Against Me! left me drenched in sweat and even more mud, I got to see the familiar face of Bob Mould at the stage right next to us. Bob Mould delivered as he always does, pulling all the punches. I only watched Bob for a little bit, because I was feeling exceptionally drained by the humidity and sweat pouring off my body. After chugging some Pedialyte (thanks for all the free samples, Riot Fest) I was good to go again and finished the night by watching Patti Smith, The Raconteurs, and Bikini Kill.

Each of these acts were phenomenal, but The Raconteurs absolutely blew me away. Jack White was on the top of his game, jumping around the stage, and punching his guitar to its limits with strong distortion and screaming strings. 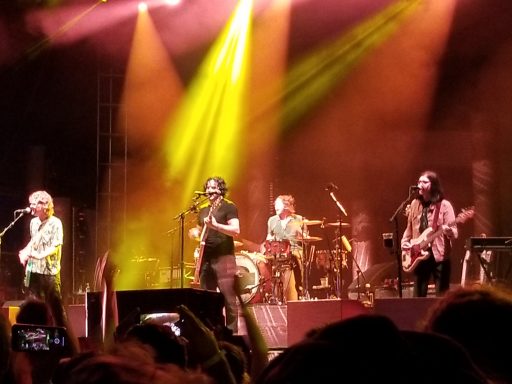 Overall, my first Riot Fest experience was a resounding success. Three days full of music, friends, dancing, and good times, it’s hard not to miss it already. I have a feeling I will be back next year to do it all over again. But until then, thank you Chicago!

Sunday Evening turned into a family event at Mill City Nights. Rachel Platten’s Wild Fire tour promoting her new album came to town. The place was packed with teens, younger kids and their parent alongside […]

Marty Stuart And His Fabulous Superlatives pack The Fine Line

Five time GRAMMY-winner Marty Stuart And His Fabulous Superlatives have been touring the U.S. in support of “Way Out West“, Marty’s 18th studio album. Mississippi born Marty Stuart was obsessed with learning the guitar and mandolin as […]

Nothing More Sells Out Music Hall MPLS And Brings The Energy

It was nice to finally be back at the venue formerly known as Mill City Nights. Although the name of the venue has changed to Music Hall MPLS, some things will never change including the […]