Work was unbearable yesterday. My day job seemed to last no less than thirteen hours before I was able to clock out and head home. It took three hours for my water to boil so I could make some macaroni and cheese for dinner. When it was time to leave my apartment and head to the show, the drive to downtown Saint Paul took five hours. Am I being dramatic? Oh, most definitely but I was so anxious for last night’s show that time was moving at a snail’s pace and the anticipation was killing me. 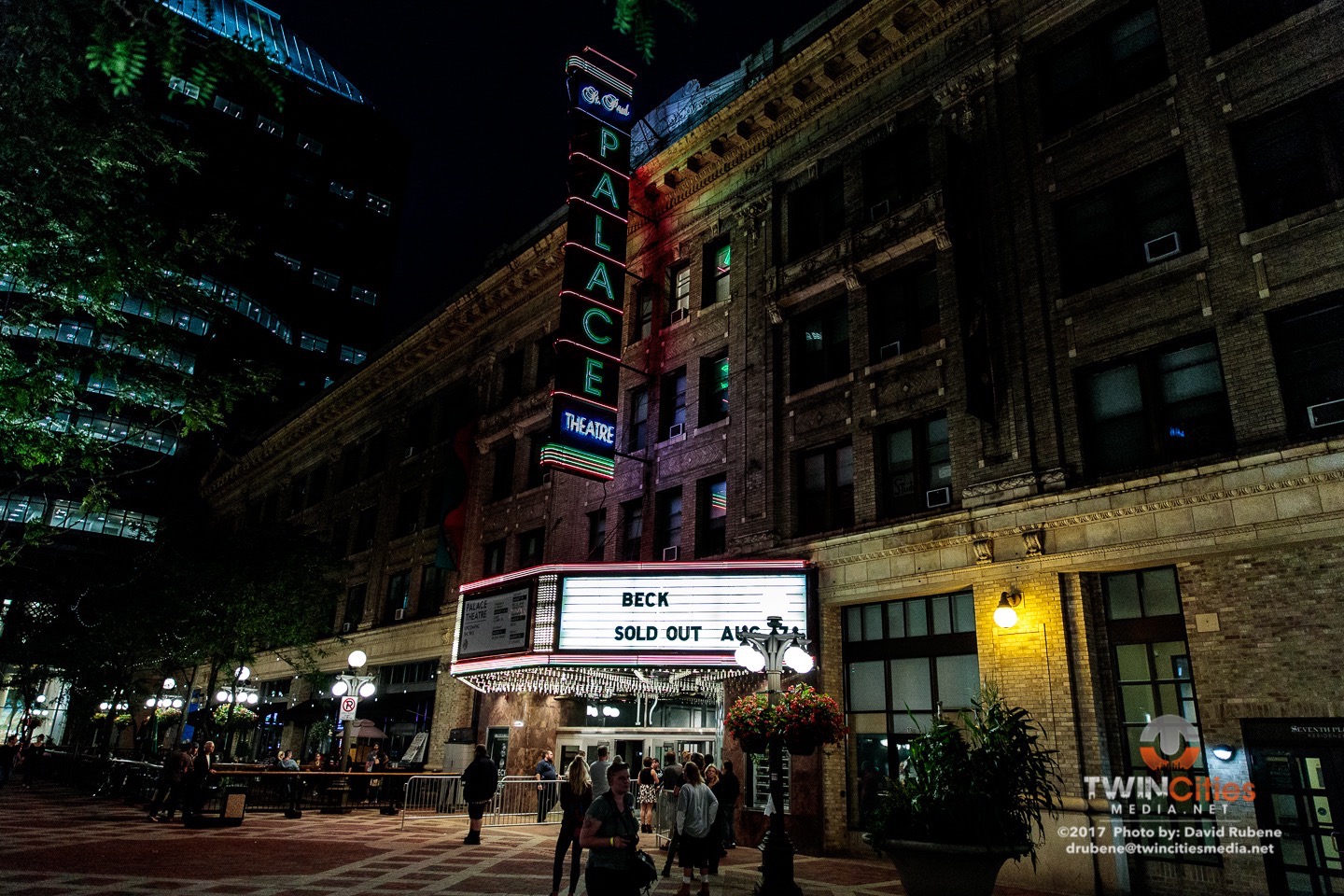 It’s not that going to a show every night gets boring, but I’ve realized that concerts have started to loose a bit of their magic when it’s a band that I’ve seen a million times before and know I will catch another million times in the future. Last night was one of the few nights where I had a chance to watch a band that I had been listening to for years yet had never gotten the chance to see live. As I was sitting there watching Beck perform for over an hour and a half, I felt that magic that got me started on this crusade to go to as many shows as possible. I was so happy I could have cried.

Alex Edelman kicked the night off with a quick comedy routine. I thought it was super strange that a powerhouse like Beck would start the night off with comedy instead of an opening band but after just a couple of lines from Alex, I was more than okay with that decision. Alex seemed to know it was a bit odd to have a comedian opening up for Beck so he called it out right away. He explained that he is the pickle to your sandwich. You know… the one you didn’t ask for but you’ll eat it anyway. With only fifteen minutes on stage, Alex seemed to nail mostly every joke and had majority of the crowd roaring with laughter. I may not be a huge stand up comedy person but if Alex Edelman ever came back to town I would definitely be snagging a ticket to catch it.

Alex was on stage for around fifteen minutes but it felt like eighty four hours to me. The changeover between sets was probably only a couple of minutes but it definitely felt closer to a month long. All of the anticipation was building up in me and the room. When the lights finally dimmed and musicians started coming onto the stage, I took a giant breath and prepared for what was to come.

Beck is one of those musicians that, although his music isn’t quite my cup of tea, it’s my default music to listen to when I have no clue what I want to hear. I remember the first time I heard Beck. I was the youngest employee at Peeple’s (a record shop in Des Moines, IA) and probably one of the youngest people to even step foot in the door there but I loved it. I was exposed to so much great music by the handful of other employees. Meadow, the single employee that I stayed in touch with after the store shut down and we all moved on with our lives and got real jobs, used to have Beck blaring through the speakers as I walked into the shop to start my shift. It intrigued me. It wasn’t poppy like all of the stuff that my friends were listening to and it wasn’t heavy like the Slipknot album I was obsessing over at the time. It was weird and un-classifiable but I knew that I liked it.

Beck’s energy was absolutely adorable. What do I mean by that? Well, I don’t really know how to explain it other than when watching him awkwardly dancing across the stage, you couldn’t help but have a big cheesy grin on your face to the point where your cheeks hurt. Beck made it look cool to have no dance moves and truly brought an entirely new element to the live show beyond the lights and sounds. Although I felt a bit confined to my seat, as soon as Beck started playing the hit song “Loser”, everyone rose to their feet and the entire balcony turned into a dance party. The dancing throughout the night was absolutely everything I had expected from a Beck show and then some. To say the fun loving atmosphere was perfect would be an understatement.

Although my day seemed to go by as slow as molasses, the nineteen song set, followed by two song encore, seemed to be over in just a snap of the fingers. As the final note of “Where It’s At” rang out I couldn’t help but be a bit reluctant to leave my seat.

With the hundreds of shows I go to every year, very few leave me feeling the magic that got me sucked into this world of live music. I felt the magic last night and my cheeks still hurt from smiling so much.

My long and extremely emotional Minnesota goodbye to The Triple Rock Social Club continued last night. We are down to the single digits for my nights spent at this legendary club and I honestly am […]