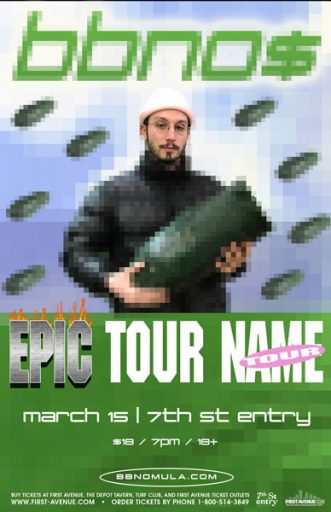 With one of the most distinct drawls in modern hip hop, bbno$ (pronounced Baby No Money) has carved a lane all his own. The Vancouver Canada native has accomplished such an undertaking in just a few short years with the help of frequent collaborators, Minnesota’s own Yung Gravy and producer Y2K among others. The later of which is responsible for the collaborative charting hit ‘Lalala.’ Amidst the hustle of the music industry bbno$ has been hard at work over the past few years. And to think debut album came out just two years ago in 2018, aptly titled ‘Bb Steps.’  The show is sold out but check for last minute tickets HERE

bbno$ has managed to drop three albums of his own in the time since his musics adventure has begun and his most recent effort, ‘Baby Gravy 2’, is the sequel to the mixtape ‘Baby Gravy.’ The record is a joint effort between bbno$ and long time collaborator Yung Gravy. The infectious flows bbno$ managed to pack into this record along with Gravy’s never ending punchlines make this album a treat and hard to put down once you’ve started.

bbno$ is hitting the road early this year again and fortunately he’s making a stop in Minneapolis. He’ll be playing the legendary 7th Street Entry when his ‘Epic Tour Name’ Tour comes to Minnesota later this month on the 15th. If you’re unlucky enough to not have purchased a ticket to his Minnesota (it’s sold out) show is highly recommend to catch him on another date this time around.