It is impossible to describe the impact Babes in Toyland have on women in rock. There are bands named after their songs, almost every female band that is doing anything harder the pop (and many of those) lists them as one of their influences. So when Babes in Toyland reunited and were announced for Rock the Garden a collective (and decidedly female voiced) HELL YEAH! arose from their fans.

The babes are not pretty, they are not nice and they certainly are not easy. But they don’t give a flying fuck about anyone’s opinion. They are here to kick ass and play punk rock, which makes them glorious, beautiful and inspirational.

Punk has been described as “2 minute bursts of anger” and those bursts came from a .50 caliber machine gun Sunday evening. It took them a couple of songs to find their rhythm but there was something raw, genuine and unrehearsed about that. Once they got going Babes in Toyland blasted their fans who ate it up. Lori Barbero ruled her drum kit with a shit eating grin on her face like a punk version of the Cheshire Cat. Kat Bjelland scared the crap out of any of the “suburban bros” in the audience with hard riffs, wild screams and crazy stares. And bassist Maureen Herman showed why bass players are usually the coolest band members. 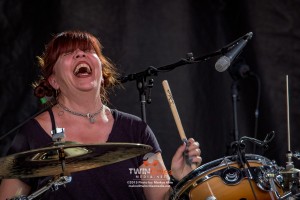 Their set earned them an instant spot on my top 10 rock moments list.

The Eagles bring fans on a journey to the past after announcing their 2018 North American Tour which will feature Jimmy Buffett and the Coral Reefer Band on this part of their tour. After choosing […]

Floozies Will Funk Up First Avenue on 9/30

The Floozies will bring their fun and funky circus to the First Ave. Main Room on Saturday, September 30th.  Just outside the jazz mecca of Kansas City springs liberal oasis Lawrence, Kansas—separated only by the […]

Before diving into this article, I think it’s worth noting I in no way feel I have the right to review or judge the performance of a Beatle. That being said, I’d like to present […]