Minnesota Shinedown fans have another chance to catch the band’s 2019 ATTENTION ATTENTION World Tour if you missed their Minneapolis show on March 11th at the Target Center. On October 6th the multi-platinum rock band will be back in the state, this time just an hour away from the Twin Cities, in Mankato, MN. Shinedown has been selling out arenas and receiving rave reviews during their tour, backed by their biggest, most eye-popping production yet. After touring with Badflower, Dinosaur Pile-Up, and Broken Hands for their Summer 2019 leg of the tour, they have reunited with Papa Roach, Asking Alexandria, and now also Savage After Midnight, for support. Their Fall 2019 leg of their World Tour will stop in 23 arenas, from September 17th through October 19th. For the Sunday, October 6th show at the Mankato Civic Center Arena, doors open at 5:30pm and the show begins at 6:15pm. Tickets begin at just $29.50 and are still available HERE.

Leading the charge for 21st century rock, multi-platinum, record-breaking band Shinedown – Brent Smith [vocals], Zach Myers [guitar], Eric Bass [bass, production], and Barry Kerch [drums] – has sold more than 10 million albums and 10 million singles worldwide, has 11 platinum and gold singles and four platinum and gold albums, 13 #1 active rock hits, and averages more than 4 million monthly listeners on Spotify as one of the most-listened-to rock bands on the platform with over 600 million streams, contributing to their more than 1 billion total overall streams to date. Every single released throughout the band’s career has hit Top 10 on the rock charts – an unparalleled feat.

Reaching far beyond any genre or label, Shinedown’s uplifting anthem “GET UP” – which has become a crossover hit at Hot AC after spending several weeks at #1 on Billboard’s Mainstream Rock Songs Chart – has quickly became a beacon of light for listeners around the globe, offering an urgent and universal message of hope, empathy and encouragement that has been connecting with those going through hardships of all types and those supporting loved ones who may be struggling. Speaking to the human spirit in a time of need, “GET UP” was born from a very personal place, inspired by Brent watching his friend, Shinedown bassist Eric Bass, deal with clinical depression. Shinedown recently released a stunning new piano version of the song, propelled by the undeniable power of front man Brent Smith’s voice.

“GET UP” has racked up more than 38 million streams, landed the band on Live with Kelly and Ryan, and was heard during the Walter Payton Award during the Super Bowl Pregame show among other television spots. Garnering praise from the likes of HuffPost, Salon, Rolling Stone, Consequence of Sound, Buzzfeed, Parade, Grammy.com, Popdust, No Depression and more with key playlisting on Spotify and Apple Music, “GET UP” broke a new record for Shinedown giving the band the most Rock Airplay Top 10s ever and their 13th #1 on Billboard’s Mainstream Rock Songs Chart (the second most in the history of the chart, tied with Van Halen). Shinedown’s chart-topping album ATTENTION ATTENTION, out now via Atlantic Records, simultaneously hit #1 on Billboard’s Alternative, Top Rock and Hard Rock Albums Charts, debuted Top 5 on the Billboard 200 and spawned current Top 10 Active Rock hit “MONSTERS”, #1 Active Rock hit “DEVIL,” and the rousing track “THE HUMAN RADIO”, in addition to “GET UP.” After concluding these final dates of their ATTENTION ATTENTION world tour, Shinedown will be traveling to Europe as the special guest on Alter Bridge’s November and December 2019 tour dates.

The alternative-rock quartet Papa Roach announces their highly-anticipated 10th studio album, Who Do You Trust? out on January 18, 2019 through Eleven Seven Music. The 12-track anthemic album features heavy rhythmic guitars and catchy hooks on “Who Do You Trust?” and “Renegade Music” and melodic tunes on “Not The Only One” with emotionally-charged lyrics throughout the album. The 10th studio album is produced by Nick “RAS” Furlong and Colin Cunningham. The track “Top Of The World” is produced by Jason Evigan.

“Our goal for our 10th album was to push ourselves even further into genres that inspire us most. We have reached the place where we always wanted to be, creating new and exciting music.” – Bassist Tobin Esperance.

“Papa Roach’s new album showcases the band’s eclectic tastes, while maintaining their true identity as a now legendary act. The themes on this album is to take risk. When you’re tired of ‘fitting in’, the band stands out. “Not The Only One” is one song that stands out as a new wave anthem in the pool of Active Rock.” -Producer, RAS on the album, Who Do You Trust?

Papa Roach just released a new video for “Come Around” that features their super-fan and friend, Mark, who has attended 57 Papa Roach concerts.

Asking Alexandria have earned a place among the most streamed, downloaded, watched, and altogether listened to bands in a generation, combining the innovation of modern active rock with the traditional attitude of the culture’s trailblazers. They’ve shared the stage with Guns N’ Roses, Green Day, Alice In Chains, and Avenged Sevenfold, and Slipknot; co-headlined with Black Veil Brides; joined Warped Tour and Rockstar Mayhem; played every major rock festival in the world; and headlined sold out theater tours. “The Final Episode” and “Not the American Average” were both certified gold by the RIAA for single sales in excess of 500,000 each. The music videos for those two singles alone amassed over 100 million views on YouTube.

Their third full length album, From Death to Destiny (2013), shot to #1 on the Rock and Metal charts in the U.K. and cracked the Top 5 of the Billboard 200 in the United States upon its release. Made with producer Matt Good, Asking Alexandria’s self-titled fifth album is an unbridled celebration of acceptance, of the strength of diversity and the freedom of “leaning into the crazy” (as Worsnop puts it), instead of struggling for conformity. “Into the Fire” offers a beautifully combative, contradictory, and unrelentingly powerful message to the true believers who have stood by this band through thick and thin. “I wouldn’t take back a moment / Not one miserable moment / I’ll give it all ‘till there’s nothing left,” Worsnop sings. It’s most assuredly a genuine promise.

Asking Alexandria’s most recently released a video for “The Violence”.

Dogged perseverance and unyielding determination are qualities shared by countless bands struggling to break out from their hometown club scene and onto the arena stage. Memphis, Tennessee quintet Savage After Midnight have exhibited far more patience and dedication than most. With the release of their new single “Unleash” (Radio Edit) they are proving that persistence pays off. The song promotes a message of empowerment in the face of adversity, driven forward by steady backbeats, chugging guitars and electronic effects. Since the band members formed in 2009, Savage After Midnight have been sidetracked by an obligatory name change, a studio fire, scrapped recordings from different producers, a crippling lawsuit they had nothing to do with and an 11th hour record label change. We’ve been put through the wringer, man,” says vocalist Shi. “We’ve totally been fed through it. If it’s true that what doesn’t kill us makes us stronger, then we must be the strongest band in the world.”

The years of trial and error, and even more years of being uprooted and returning to square one made Savage After Midnight a more professional band, improving their chemistry and allowing them to fine tune their presentation both live and in the studio. The band connected with producer John Falls (Egypt Central) and recorded what would become the “11:59” EP. The band’s “work-hard-by-day, rock-harder-by-night” ethos is poured into a collection of songs that are an energized, emotional introduction to musicians that desperately want to make a mark, but only on their own terms. S.A.M. music is aggressive, but still has pop sensibilities. The tracks are colored by galvanic hard rock passages, a contrast of screamed melodies and soaring hooks, and it’s augmented by electronic segments that give the band a modern edge. “10 Feet Tall,” the first single and video release from their “11:59” EP, made inroads at Active Rock Radio, peaking at #35 on the BDS and Mediabase charts. It’s anthemic and energizing, building from a melodic verse, through a propulsive bridge and into an unforgettable chorus. The song is being used in promos for the 2019 ESPY awards, and will be aired as bumpers throughout the ABC telecast. “Heartless Machine” is an intense song about being torn down and rebuilt the way someone else wants you to be. The video premiered @ Loudwire.

Savage After Midnight has toured with Shinedown, Sick Puppies, and Story of the Year, among others. So far in 2019 the band has toured with New Years Day and Pop Evil, with a fall tour with Shinedown & Papa Roach on tap. The band has additional songs recorded for another EP to be released in late 2019 or early 2020. Living up to the band’s name, leader Shi admits: “We all like to get wild. There’s something savage about us when it comes to throwing down and partying – it’s just who we are. We work really hard, but at the end of the day we’re down for a good time. We’ll put on whatever work hat we have to, but once it strikes midnight it’s our time – and it’s time to tear it up!” 2019 will be the year that Savage After Midnight tears through the rock world and at long last, makes it mark. 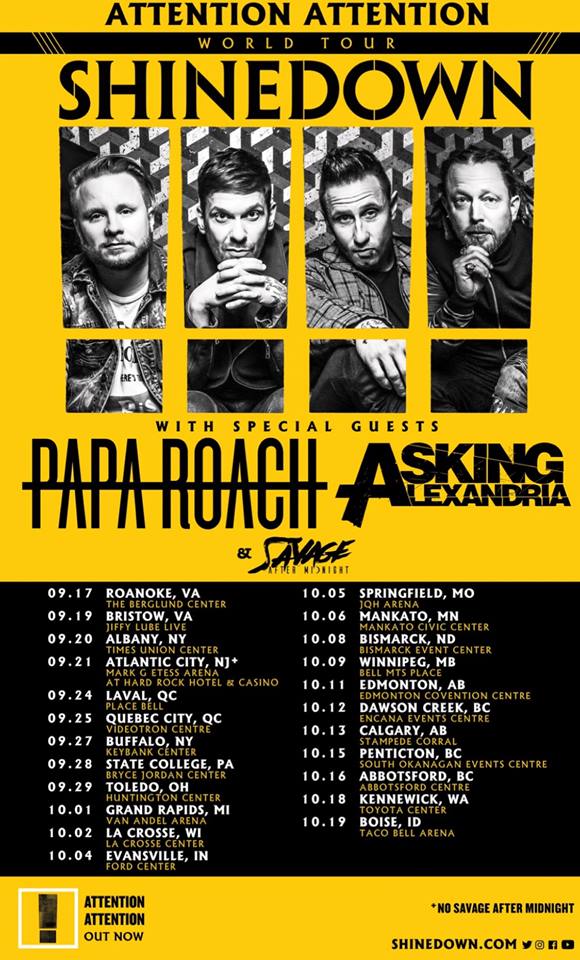 An Intoxicating Evening with The Japanese House & Blaise Moore

Concert season is in full swing here in the Twin Cities. Just about every night it seems another great band rolls through town. January was chalked full of our local favorites, but this month we’ve […]

I’ve Been Around The World, To See Lisa Stansfield At The Pantages

When Lisa Stansfield’s monster hit “All Around The World” was released in 1989 I was floating upon the high seas cut off from radio, TV, and music news. Yet somehow her album “Affection” made it […]

My long and extremely emotional Minnesota goodbye to The Triple Rock Social Club continued last night. We are down to the single digits for my nights spent at this legendary club and I honestly am […]