All That Remains (ATR) brought their unique brand of metal music to the jam-packed Cabooze for a hard and heavy Friday night show in Minneapolis. If you’ve ever been to the Cabooze, you know it has a unique arrangement, with the stage set-up on the narrow edge of the long, narrow bar. Due to this, the area in front of the stage was completely packed as ATR took the stage early tonight at 8:35pm. Flashing strobe lights set the atmosphere and then the veteran rockers set the tone, opening with 2006’s “This Calling”, which showcased what the band is about. This song blends intense rapid-fire drumming, metal guitar and bass, and varied tempo and intensity, led by the lone founding member of ATR, Phil Labonte. His vocalizations alternate from intense terse singing, to growling, to screaming, to pure, sweet singing. Showing off the guns in a sleeveless t-shirt, he commanded the attention of the crowd from the get-go. They kept it heavy with “Chiron” and then played their well-known, uniquely titled, “This Probably Won’t End Well”. After their fourth song, “Hold On”, Labonte told us how happy they were to be here.

While the headliner was happy to be back performing in the Twin Cities, the primary opening band, Lacuna Coil, could not say the same thing. Unfortunately, as ATR’s frontman told us, “Our friends in Lacuna Coil can’t be here tonight. They are stuck in North Dakota. Their tour bus went off the road, and if not for a pile of snow, who knows. They said to tell you they are extremely sorry. And they are the sweetest people, so I know they mean it.” In early October who would have ever thought that two feet of snow could be the reason a band could not play a show. Here is what Lacuna Coil posted to apologize for having to cancel their appearances and thank the North Dakota Sheriff and State Police for rescuing them.

From Lacuna Coil’s Facebook: “We are sorry to inform you that due to a snow blizzard we are stuck in North Dakota with our tour bus off-road. We are all fine, but we are forced to cancelled today’s meet and greet at “Down in the Valley” and tonight’s show at “The Cabooze” in Minneapolis. We will try to make it up to you guys as soon as possible, we are really bummed ☹️ Special thanks to the “North Dakota Sheriff” and “State Police” for the quick assistance, you guys rule!” 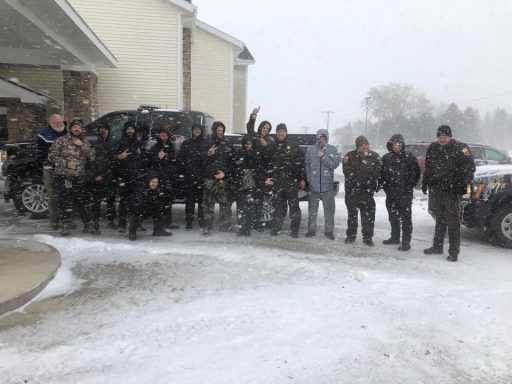 All That Remains can also play a mean rock ballad and Labonte told us the next song was off their new album, Victim of the New Disease, and was kind of chill, with almost no screaming. The song is called “Just Tell Me Something” and it features singer Danny Worsnop, from Asking Alexandria, on the album version.

But Labonte admitted, “Minneapolis, you came here tonight because you want to see something heavy. How heavy do you like it? All That Remains will give you heavy. Get your middle fingers in the air. This song is called “Fuck Love”.” This dramatically different song from the new album instantly got some bumping and moshing going in the front of the stage that would continue for much of the evening. This metal show was in full force.

We were also asked how many of us had seen ATR before, and how many were seeing them for the first time. “You are in luck,” Labonte told the first timers. “We are going to play some stuff next from our 2006 album (The Fall of Ideals). “Not Alone” was the first in this bunch of older songs and its guitar work reminded us of another important person who couldn’t be here tonight, the band’s original lead guitarist, Oli Herbert, who sadly passed away at the age of 44, now nearly one year ago. The man some called “Wizard” for his long hair and beard, and how he played his magic, will never be forgotten. But Labonte has said that Herbert would have wanted the band to continue on and that’s how they remember him each day.

Temporary touring replacement Jason Richardson, former guitarist for All Shall Perish, Born of Osiris, and Chelsea Grin, is now a permanent fixture. His work on the solo for “Not Alone” and especially “The Air That I Breathe” showed that he is up for the job. Just the first few guitar bars of “Air” got fans excited and Richardson played a creative, and melodic solo that totally ruled. Tonight, there were plenty of fists, horns, and middle fingers in the air. Closing out this trio of 2006 songs, this time Labonte raised six fingers in the air and soon many in the crowd did the same for one of their most intense songs, “Six”. Labonte closed out the song standing atop the platform just flat-out screaming.

The frontman asked if there were some smokers here tonight as it sure smells like it. He joked that although he’s not much of a smoker, “I guess tonight I am.” Due to the snowstorm wiping two opening bands off the slate, he said that tonight they would be getting done pretty early so we could probably find at least Jason bellied up to the bar. And if you stopped over at the merch table you could learn how to meet the entire band. With this talk a hint that the show was coming to an end, Labonte told us the next song was also kind of chill and from their 2012 album, A War You Cannot Win. Fans sang along wholeheartedly to the catchy “What If I Was Nothing” and as the song finished, the frontman begged for more applause. He then led the crowd in some fast-paced clapping which was joined by some metal guitar work, that machine gun like drumming, and the crowd shoving and bumping for one last time tonight. Closing out the show in grand fashion was the band’s big mainstream rock hit, “Two Weeks”.

While I was disappointed that this freak snowstorm did not allow Lacuna Coil to partake in the show tonight, a chance to see Phil Labonte and All That Remains back in full force made it a great evening. Note to self: dig out winter gear.

Setlist:
This Calling / Chiron / This Probably Won’t End Well / Hold On / Just Tell Me Something / The Last Time / Fuck Love / Blood I Spill / Wasteland / Madness / Not Alone / The Air That I Breathe / Six / What If I Was Nothing? / Two Weeks.

Alison Moyet Captivates The Audience At The Fine Line

Alison Moyet was truly an experience I was not ready for when I walked into the Fine Line and noticed that I was probably one of the youngest people there. I had discovered Miss Moyet […]

New York base electronic duo SOFI TUKKER is set to play the Fine Line Music Cafe on May fourth. This show is sold out, find tickets to other shows HERE. But do keep an eye […]