Don’t miss your chance to catch the young metal band Alien Weaponry at the 7th Street Entry on May 22nd.  The young trio are currently on the North America 2019 leg of their Tumatauenga Tour.  Local metal band Blackbird Bridge will open for them. Doors open at 7:30pm and show starts at 8:30pm for this 18+ show. Tickets are just $10 HERE. Check out their cool new official video for “Ahi Ka” just released on May 10th.

Alien Weaponry are “one of the most exciting young metal bands in the world right now” according to Revolver Magazine in the USA. And they’re not the only ones who thinks so. Since well before they released their debut album Tū on 1 June 2018, fans, bloggers, the music industry and the media worldwide have raved about Alien Weaponry’s unique blend of thrash metal and their native language, Te Reo Māori.

The three-piece thrash metal band from Waipu, New Zealand, was formed in 2010 by brothers Lewis and Henry de Jong, who were 8 and 10 years old at the time. The band consists of Lewis de Jong (guitar and vocals), Henry de Jong (drums), and Ethan Trembath (bass guitar).

Most noted for their fusion of Te Reo Māori (the native language of New Zealand) with thrash metal, they deliver emotionally and politically charged stories of conflict and grief with a warrior-like attitude. Drummer Henry de Jong says, “Our musical style and messages have a lot of similarities with haka, which is often brutal, angry and about stories of great courage or loss.”

The de Jong brothers are of Ngati Pikiāo and Ngati Raukawa (Māori tribal) descent; and began their schooling at a kura kaupapa Māori (full immersion Māori language school), where singing waiata (songs) and performing haka were a daily routine. Also ingrained in their early learning were stories of New Zealand history told to them by their father, who, alongside the story telling, played them music from Metallica, Rage Against the Machine, Anthrax, Ministry, Red Hot Chili Peppers; and it is this combination of music, language, history and socio-political commentary that underpins the band’s sound and ideas.

The brothers named the band Alien Weaponry after watching the movie District 9. After moving to the small town of Waipu in 2012, they were joined by bass guitarist Ethan Trembath in April 2013. At the time, Trembath was 11 years old, and got the job because he could reach the end of the bass guitar. The band has toured extensively in New Zealand since 2013, including headline/main stage slots at the NZ Tattoo & Arts Festival, Wavefront and Auckland City Limits; as well as opening for Prophets of Rage in March 2018. More recently, they have sold out headline shows in Australia, Europe and the USA; and played to record crowds at some of the biggest and most prestigious festivals and in Europe and the UK, including Wacken Open Air (Germany), MetalDays (Slovenia), Summer Breeze (Germany) and Bloodstock Open Air (UK).

In New Zealand, Alien Weaponry has won multiple awards, starting with their double win at Smokefreerockquest and Smokefree Pacifica Beats in 2016. In 2017, they won the APRA Maioha Award for their song ‘Raupatu;’ and were finalists in the APRA Silver Scroll Award (‘Urutaa’); the Waiata Māori Awards for Best Music Video (‘Rū Ana Te Whenua’); and the Vodafone NZ Music Awards for Best Māori Artist. In 2018, they were finalists in the Vodafone NZ Music Awards in six categories, taking home the Tui for Best Rock Artist, while the producers of Tū won the Best Producer award.

The band is managed internationally by German-based agency Das Maschine; and has a worldwide distribution deal with Napalm Records. They are represented by Pinnacle Entertainment (also representing Slayer, Alice Cooper, Rob Zombie and Noel Gallagher) in North America and UK-based K2 touring agency (also representing Slayer, Iron Maiden, Mastodon and Gojira) in the rest of the world.

Following the release of their debut album Tū, AW’s single ‘Kai Tangata’ rocketed to no.1 on the prestigious ‘Devil’s Dozen’ countdown for the Liquid Metal show on New York based Sirius XM, where it remained for 13 weeks. The video for ‘Kai Tangata’ was the ‘Most Added Metal Song’ for June 2018 on US Cable Channel Music Choice (delivering to 50 million households) and had over 2 million views on YouTube in the first four months since its release. 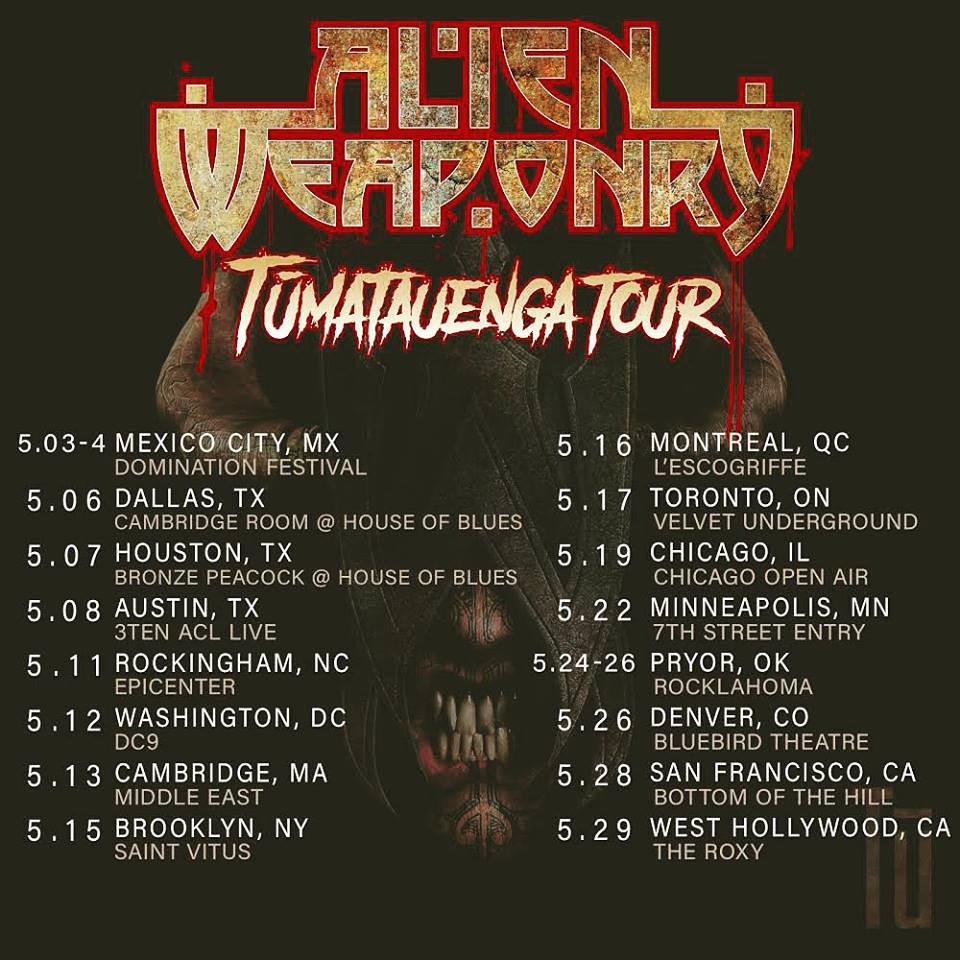 Candlebox Takes Soldout Cabooze Back to 1993 for Entire Debut Album

What stage of life were you in during the early 90’s? Still in high school or college? Or maybe you were already in the working world in 1993 when Seattle rockers Candlebox burst onto the […]

Hop Along Brings Passion And Heart To Sold Out Turf Club

I went into last night’s show blind. The guys standing in front of me while waiting to get my ID checked didn’t seem to fond of that. They had asked me how I excited I […]