Nashville based singer Adia Victoria just released her debut album “Beyond the Bloodhounds” in May and is currently on tour promoting it. She will be at the 7th Street Entry on 6/15. Tickets are still available HERE

One of the terms describing her music has been “gothic country” she calls it “back-porch-blues-swamp-cat-lady-howlin’-at-the-moon”. She travels the land of Delta blues, afro punk, and country and with “Beyond The Bloodhounds” Adia reveals a fresh reference point on the musical landscape. Ask about her artistic goals, and the songwriter/vocalist will say, “I want to shine a light on the unseen, and speak the unspeakable.” Adia Victoria is a truth teller. She admits, “I don’t necessarily paint myself in a flattering light. This isn’t the pop version of pretty or the strategically posed pretty-ugly. Sometimes I’m just ugly. There’s a brat in some of these songs, selfish, naïve, vengeful, but there’s also a tender eye that just wants the listener to feel seen and understood.” 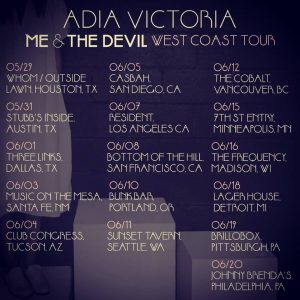