One of my favorite mainstream rock bands, Adelitas Way, will be at the Fine Line on Thursday May 9th for the Minneapolis stop on their What It Takes Tour. What a rare chance to see a big-time band up close in a small venue. Blacklite District will be joining them as guest stars. Additional supporting acts are American Sin and ZFG. This is an 18+ show with doors at 7pm and show at 7:30pm. General admission tickets are a steal at just $15 and upper balcony reserved table seating is only $30. Tickets and several tables are still available HERE.

In 2012 they released their third album, Stuck, which had another Top 5 single with “Dog on a Leash” (#5 active rock). “We Came” became ESPN Monday night football’s 2016 theme song. The band achieved yet another Top 10 single with “Bad Reputation” from their fourth album, Getaway. Their single “Ready for War (Pray for Peace)” became the official theme song of WWE PPV TLC. “Notorious” was released in 2017 and became one of the bands most successful singles in its history, gaining over 10 million streams and growing. Recent singles “Drifting” and “Still Hungry” from 2018’s album Live Love Life are on fire on Spotify, Apple Music, Octane, and Rock radio. The band’s current tour is named after their new single “What It Takes” which was released on April 4th.

The band has toured with Guns N Roses, Shinedown, Creed, Three Days Grace, Halestorm, Theory of a Deadman, Breaking Benjamin, Staind, Alter Bridge, 10 years, Buckcherry, Hinder, Flyleaf, and The Pretty Reckless to name a few. They have played the main stage at the biggest rock festivals in the US, such as Rock on the Range, Carolina Rebellion, Louder than Life and more.

Adelitas Way got their name from a very unorthodox source. While on tour on the west coast, their van was pulled over and eventually raided and thieved by corrupt Mexican cops who took all the money the band had, except for the few dollars lead vocalist and songwriter Rick DeJesus stashed in his boot. Disoriented and shaken from the experience, the band headed to the first bar they could find to calm themselves down. It was the Tijuana’s Adelita Bar. After spending some time in there, the guys realized that it wasn’t just a bar, it was a brothel. Rick ended up talking to one of the girls who worked there and asked her how she could live like she was day in and day out. She explained that it was the only way she knew to support her family in need. Talking to her helped change Rick’s outlook on life and people, and thus the ‘way’ she lived became the inspiration for the name. 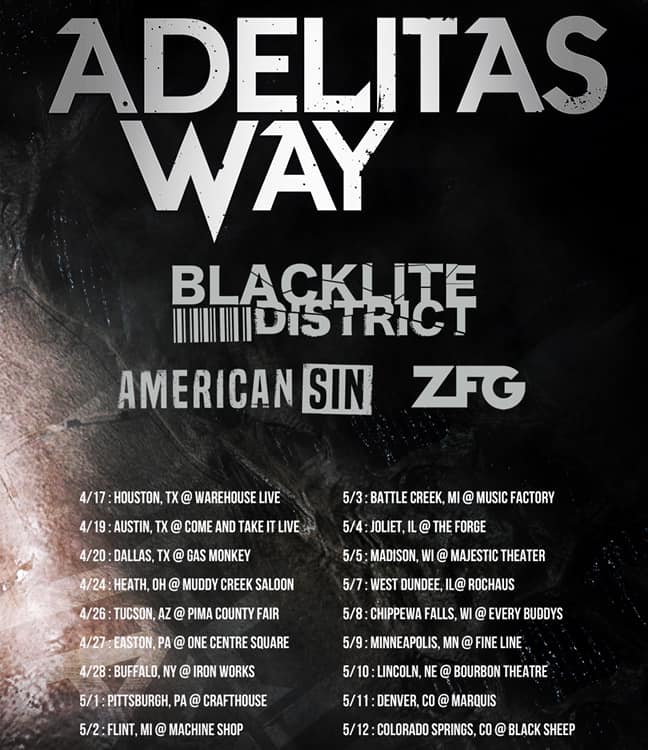 Blacklite District follows no rules. With sounds of everything from electronic, EDM and hip hop, to hard rock and alternative, the band truly stands out from the pack of what has becomes today’s generic sounding “Active Rock”. Formed in 2011 by Kyle Pfeiffer and Roman James, the band grew organically in their local music scene through the years to come. BLD was discovered by Grammy Award-winning producer, Stephen Short (Paul McCartney, Queen), which resulted in a 10 day recording session at the world’s largest residential recording studio, Sonic Ranch, just outside of Mexico in Tonillo, TX. The group re-located to Los Angeles and played some of the most famous venues in the world for the remainder of 2011.

Blacklite District have made a name for themselves over the past few years thanks not just to their music, but also their videos. The duo first notched a charting single with “With Me Now,” a No. 34-peaking song on Billboard’s Mainstream Rock Songs airplay chart in 2013, but it began to gain steam thanks to a series of clips on YouTube with its music set to footage from the popular video game Minecraft. They’ve accumulated more than 100 million views on videos set to their songs since then, including a clip featuring “Cold as Ice,” its second Mainstream Rock Songs appearance in 2018 (No. 35, January 2018). Says Kyle, “I work with multiple major YouTube channels that promote my music to a huge worldwide audience. It’s been amazing as an independent artist of this generation to reach an audience of this size.”

However, for the band’s next act, they shed the 3-D theatrics in favor of a live-action video for “Hard Pill to Swallow.” The video for the lead single from Blacklite District’s latest album, 2018’s Through the Ages, finds Pfeiffer and James performing the track outside the Anaheim Regional Transportation Intermodal Center in Anaheim, California.

Hard rock needs a little danger these days. For too long, the reckless abandon that defined and invigorated the genre at its outset has softly faded. Enter American Sin. The Cincinnati quartet—John Bobinger [vocals], Samuel Morelock [guitar, production], Marcus Barber [guitar, vocals], and Jake Wire [bass]—infuse raw attitude into chantable hooks with just the right amount of metallic proficiency and a personal style that could easily be likened to a rock ‘n’ roll G-Eazy complete with denim, leather, and slicked back hair. The four band mates initially made a name for themselves as successful Ohio favorites Come The Dawn. With their new name, American Sin, the band confidently step into the spotlight with their full-length self-titled debut album for Sumerian Records.

“In my opinion, American Sin is what we always wanted to do from the get-go,” exclaims Samuel. “We definitely have that metal bone, but we really love rock music at the same time. It’s something that we’ve been passionate about pursuing, and it finally came to fruition. We wanted to come out with a relatable and powerful active rock sound that still has some of that heavier DNA.”  Samuel personally oversaw production of their album, while they enlisted the mixing talents of Alan Hessler [Avenged Sevenfold, Asking Alexandria]. Evoking influences ranging from Breaking Benjamin and Three Days Grace to Five Finger Death Punch, the songs showcase a new energy for the musicians. “I’d always written music like this just for fun,” Samuel goes on. “It’s something that we messed around with in the past. It got serious once I started to show the other guys. It was a really natural progression and seamless direction.”

“So Far Down” introduced the group with driving rhythms, robust guitars, and a devastatingly catchy refrain, “about struggling with a personal demon.” Its music video racked up 166K YouTube views in under a month’s time. Meanwhile, the single “Empty” revs up into an undeniable chorus that’s both hard-hitting and hypnotic all at once. The video would also quickly approach 200K views. “I actually wrote that while I was housesitting for a friend,” he recalls. “It came together super quickly. The guys added their touch to it as well. It’s a good example of our approach. We like to write relatable lyrics that fans can find their own meaning in. It’s never super straightforward. There’s a bit of mystery.”  Like all timeless rock bands, American Sin provide a much welcome release. “It’s art at the end of the day,” Samuel leaves off. “It’s up for interpretation. It can be something that people identify with on a deep level or crank up when they want to have a good time.”

Serendipitous is an adjective that describes accidentally being in the right place at the right time, like bumping into a good friend in some unusual location, or finding a hundred dollar bill on the ground. The word could also be used well in describing the inception of the band ZFG. Within its ranks you’ll find seasoned songwriters and performers of which you may be familiar, but sometimes the sum of the parts is beyond expectations and lends itself to being genre defining.

Based in Los Angeles, CA, ZFG consists of Jules Galli on vocals, Trev Lukather on guitar, Sam Porcaro on bass and Josh Devine on drums. The members were close friends in different projects, but decided to get into the studio for fun with a new approach in mind, making music with no rules or boundaries. “Zero Fucks Given” is what they called their first day in the studio, which led to their band name ZFG. After writing and recording together on day one, the chemistry was undeniable, so the decision was made to forge their individual projects into one. By melding anthemic, hook-filled melodies within funk rock guitar riffs and groove rock beats, the band shows their ability to compact a vast array of influence and experience into a signature sound with substance, style, and soul.

As serendipitous as the making of the band may have been, ZFG runs with a different mindset when approaching the music they write by not restricting themselves to purely rock-style songs. ZFG’s music is infused in alternative, pop, R&B and a hybrid of other styles. ZFG’s radio campaign recently launched for their single “Special” and landed #2 MOST ADDED spot on the Billboard (BDS) Mainstream Rock Indicator Chart and grabbed the coveted #1 MOST ADDED spot on the Foundations (SMR) Chart. “Special” lands among the Top 10 Greatest Gainers on BOTH the Billboard Indicator & Foundations Chart!  The band just embarked on their first tour with Adelitas Way.  Fans can get a taste of their upcoming EP with the release of a lyric video for their single, “Special.”

Waiting outside in a line on one of the coldest days of the year is an incredibly unpleasant experience. In most situations, the act would not seem to be worth it. However, in the case […]

Andrew McMahon in the Wilderness Brings Metal Head To Tears

Ok we’ll keep the intro short and get down to business. Night Riots started off the evening with a set which took me by absolutely surprise. Coming out of a flu and ear plugs jammed […]

The Icehouse in Minneapolis had a busy evening Sunday, as Vicky Emerson performed at the CD Release Party for her newest album Wake Me When the Wind Dies Down. With the album getting great reviews, […]