There’s certain band that are worth seeing live over and over again. There are other bands that while great, after you seen them live once you pretty much get the jist. Brooklyn-based four-piece Acid Dad is definitely the former. They are one of those bands that has a magic about them, that is hard to put your finger on, but keeps you coming back time and time again. It’s been nine short months since the psych-punk rockers played Minneapolis, but when I saw their name pop up on First Ave’s fall docket of shows, I knew we couldn’t miss it.

It’s been a busy few months for the quartet – they released their self-titled debut album, played a slew of shows across the country, dropped a single or two and played more shows. The hustle is real for the Brooklyn-based four. And it’s clear that this hustle is paying off – at least for their live shows. Acid Dad drew a decent sized crowd to the 7th Street Entry on a Sunday night. I would love to them back here on a weekend and I have no double they would pull an even bigger crowd. Acid Dad is a band of few words during their set -but honestly the music speaks for itself. It’s loud, it can be fast, the guitar is tight, the vocals are grungy and psych with plenty of reverb in the best way. Their set in a word is uncomplicated. They are nitty gritty, back to basic punk rock and that is what we love about them. The world of music, especially this genre of modern pysch/surf/garage/grunge (call it whatever you want) punk feels so oversaturated at times it can be hard to sort through the bands that are worth listening to. And then with that – so many bands try something gimmicky to stand out from the masses. But with Acid Dad there are no gimmicks – there’s guitars, there’s monitors, there’s vocals, there’s drums and that’s really all you need. The only gimmick to Acid Dad is their kick-ass name. Which let’s be honest – is not a gimmick, because once you listen to or see these guys live the name Acid Dad makes perfect sense.

Their set was a just around an hour and featured their latest single Living with a Creature as well as older tracks such as Brain Body and a handful of tracks off their 2018-debut album. Acid Dad continues throughout the fall. And like a fine wine – Acid Dad seems to keep getting better with time so we hope to see them back in the Twin Cities very soon.

Acid Dad put together a killer opening line-up of local talent for the evening as well. The first band of the night was Go For Retro. The four-piece is self-described  “psych, post-socialmedia post, dron-E, Verb” according to their Facebook. And that is what they were – a perfect mix of pysch rock with droning vocals. Their sound is distinctly Minneapolis – with plenty of lo-fi elements sprinkled into their sound. The team here at Twin Cities Media has had the chance to catch Go For Retro a handful of times this year, including when they opened for Acid Dad back in March. We hope these four keep playing shows as we’ve loved them every time we’ve seen them!

The second band of the night was another local four-piece Black Satroi. Like the rest of the ticket – Black Satori’s sound had no shortage of psychedelic rock vibes with plenty of punk/surf/garage fuzzed out guitars. With a slightly heavier sound than the rest of the ticket  – I was intrigued by the four-piece. Black Satori played a few shorter, punkier sounds (think fast and loud circa early Minneapolis 1980’s punk). But they finished their set with a few longer more anthemic and ambient rock type tracks such as Harvest Your Mind. What stood out the most from Black Satori’s set was without a doubt their guitar playing – which was fast, polished and technically impressive There were plenty of great guitar moments from Black Satori’s set. Be sure to check these guys out on social media and catch their next show around the Twin Cities. 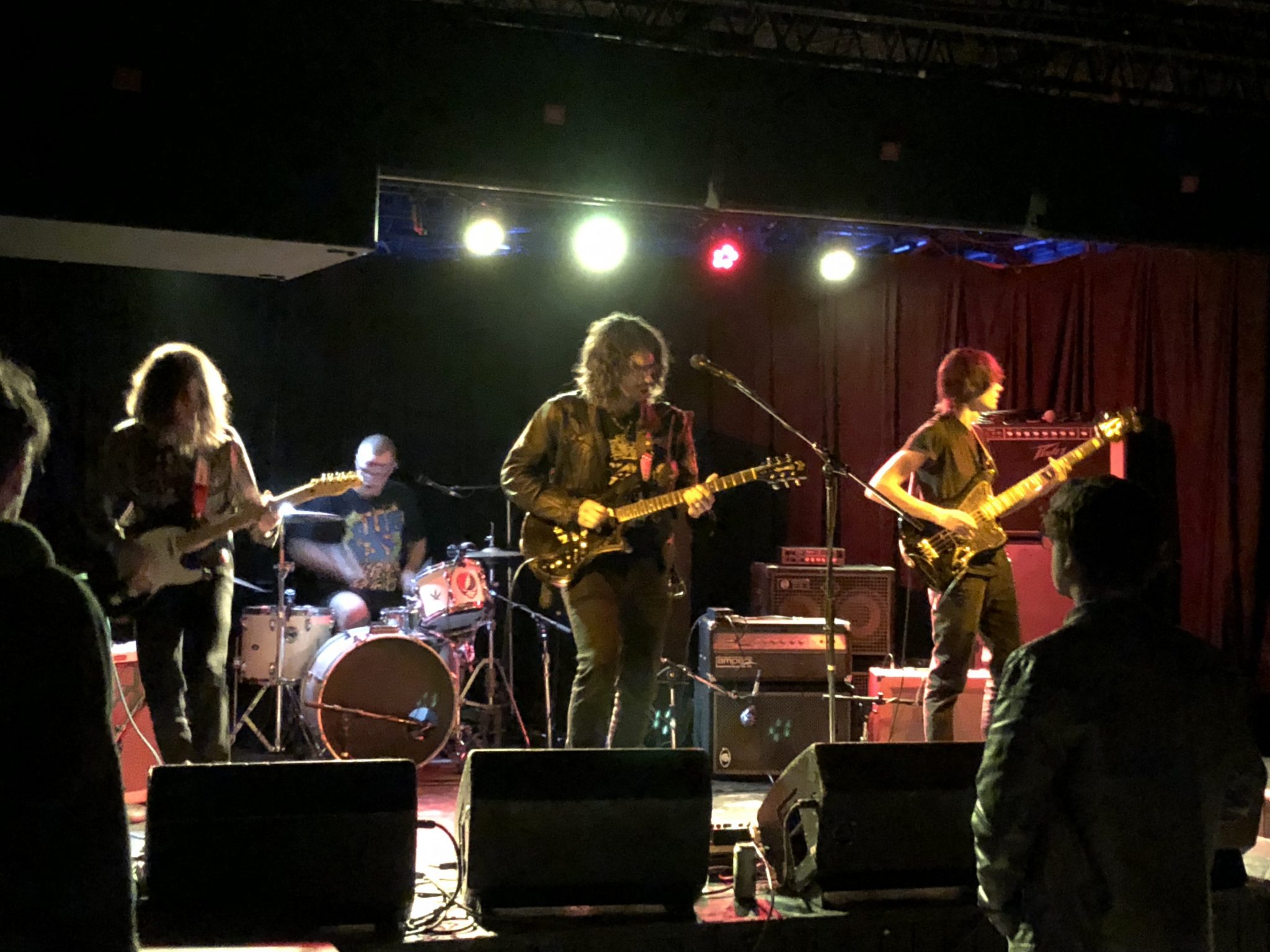 Grabbing the spot before Acid Dad was Products. This is a band whose name I’ve heard buzzing around the music scene but had not had the chance to see live yet. After catching their set at the Entry I was immediately hooked. Like the rest of the ticket – the four piece definitely had that psych rock sound – but there was an energy about their set that was unmatched. It didn’t hurt that one of the members of the band proudly announced ahead of their set (dressed in a tux) “so I actually left my brothers wedding so that I could be here for this show – so I was hoping everyone would come closer so I can record a congratulations video.” There’s really no way you can’t have a kickass set with a kickoff like that. Products also brought the reality check we all needed at  a Sunday night show – “there’s a lot of good tv out there. But thanks for coming out on a Sunday night and saying no no no – I can catch up on that later.” In the middle of their fast, punchy songs one member of the band gave a timely reminder to the crowd. “Please don’t come up to me after the show and say hey ‘man’ great set ‘man’ or hey ‘boy’ great set. Respect the trans people in your life.” Products set was heartfelt and again – there was an off the wall energy to this band that was contagious. We will be closely following Products to see what’s next! 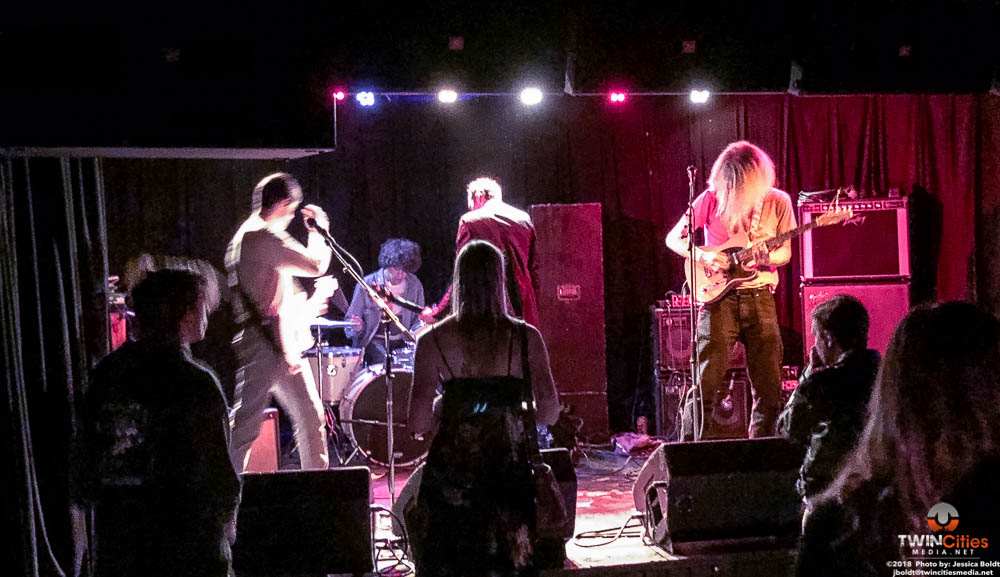 The Cities 97 Sampler Release Party 11/17, an event celebrating Sampler Vol 28 at the Myth in Saint Paul. O.A.R., We The Kings, Wrabel, Cobi, Hailey Knox and special guest Gavin DeGraw will […]

The first time I saw Peelander-Z I laughed so hard that my cheeks hurt for days after. The second time I saw them I damn near pissed myself due to laughing so much. Each time […]