5 Seconds of Summer is trying hard not to your mom’s boy band while retaining their key audience. The Aussie group known as 5SOS got their start in 2011 as YouTube contributors covering songs. They quickly gained a large following and got picked up to tour with One Direction as part of their “Take me Home” tour in 2013. Their debut single “She Looks So Perfect” was released in 2014 on their own label, with a self titled album not far behind. 5SOS packed the Xcel center with 13,000+ fans.
The show came just 2 weeks after “She’s Kinda Hot”, the first single from their upcoming album hit the airwaves.
One way to get 12,900 young women excited and 100 Dads/Boyfriend bewildered,  is a good countdown. That was accomplished with a 2 minute montage that crested in volume the last 10 seconds. Just before the clock hit zero, the last message on screen was “Just had a sausage sandwich and it was good”. If that was a live tweet from someone in the audience, they either need to get their priories aligned or it was the weirdest reference of the week. 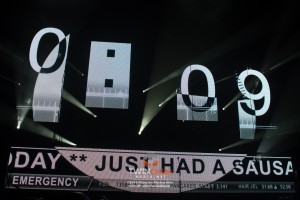 Once the band took the stage they delivered a flurry of their pop harmonies moving quickly from one song to the next. There was enough walking from one stage extension to the other to be reminded of one of the Lord of the Rings movies. In addition to the large video screens the stage also featured images of the quartet above the stage. 5SOS worked to present themselves as a more mature and rockier band with some success. Overall shows are judged by their audience rather than hoity-toity music critics. Whatever you may read in mainstream media, when the show was over the Xcel released thousands of audience members with bright eyes, big smiles on their faces and sore throats, clutching their t-shirts and other memorabilia. And by those standards, the evening was a smashing success.

Set List:
End Up Here
Out Of My Limit
Heartbreak Girl
Voodoo Doll
Permanent Vacation
Don’t Stop
Disconnected
Long Way Home
Rejects
Heartache On The Big Screen
Wrapped Around Your Finger
Amnesia
Beside You
Everything I Didn’t Say
American Idiot (Green Day cover)
Kiss Me Kiss Me
She’s Kinda Hot
She Looks So Perfect
Encore:
Good Girls
What I Like About You (The Romantics cover)

It might have been cold outside, but it was nice and warm inside a sold out 7th Street Entry last night for CAAMP and Rainbow Kitten Surprise. For two bands that are just starting to […]

It’s getting colder and colder out which is making it harder and harder to leave the apartment every day. Yes, I know I signed up for this weather when I moved up to Minnesota over […]

Article by Nicole Carlisano – special to TCM If there were any Minnesotans with problems on Friday night, they forgot them and buried them in the sand as they came out to watch country icon […]