On June 21, 2019, British group Hot Chip released their seventh studio album, A Bath Full of Ecstasy. Their third album for Domino, A Bath Full of Ecstasy is the group’s definitive release, crystallising the sound they’ve become celebrated for – bridging euphoria and melancholy with colourful melodies, idiosyncratic vocalisations and pounding electronic pop rhythms. The album also sees them open up to a more adventurous and collaborative song-writing process, choosing to work with outside producers for the first time: Philippe Zdar, the French maestro who’s shaped the magic of Cassius and Phoenix, and Rodaidh McDonald, the Scot who’s collaborated with The XX, David Byrne and Sampha, among others. Their US tour supporting this will make a stop at First Avenue on 9/14. Tickets are still available HERE 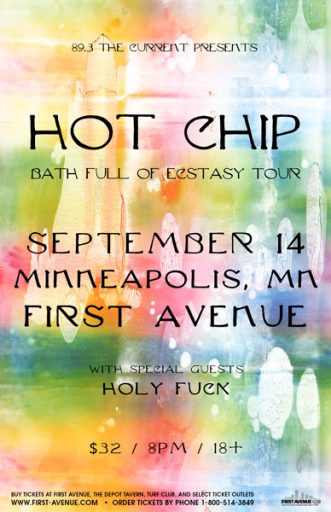 The group (Owen Clarke, Al Doyle Joe Goddard, Felix Martin and Alexis Taylor) began working on A Bath Full of Ecstasy in the autumn of 2018, the bulk of it written and recorded in three, one-week long sessions. At his Motorbass studio in Paris, Zdar played the role of co-producer, mixing engineer and gentle eccentric, and built much of the sonic space that the album occupies: a focus on drums and bass, with minimal use of guitar and plenty of multi-layered, arpeggiated keyboard melodies; shaping A Bath Full of Ecstasy with the “French Touch” he’s known for. When recording in London, the analytical McDonald encouraged the group to make each song leaner, more direct. “Rodaidh was really good at getting us to think about the song-writing,” says Goddard, “especially on ‘Melody of Love.’ He was quite ruthless – ‘is this verse too long? Do we have to write something stronger? We should get to the chorus faster.’ He pushed us to be more ambitious.”

The album’s opener, “Melody of Love” began as a 12-minute instrumental track and features a sample from the gospel group The Mighty Clouds of Joy. Under the eye of McDonald, the group turned it into a bombastic explosion of Technicolor pop. A repeating sampled vocal, cut-up to the point of abstraction, follows the lyrical chorus and an uplifting synthesizer motif. This musical passage is the melody of love, the summation of the song’s workings; by working together, the group may be able to find the perfect gesture for their emotions. “Melody of Love” is about the importance of the transformative, non-verbal moment – ecstasy as personal happiness, but also of transcendence, of being outside oneself.